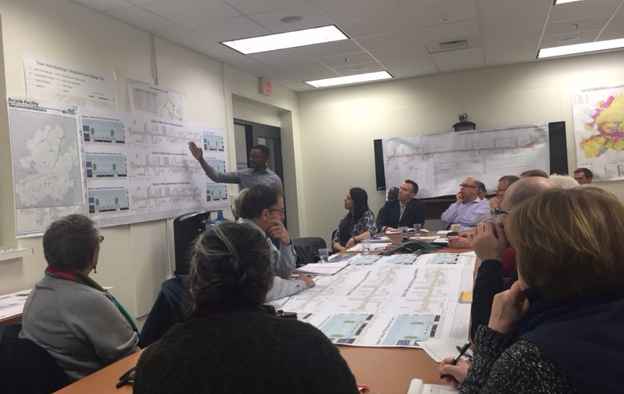 The group overseeing a new design for West Main Street was shown three options Thursday for how the roadway might be reconfigured.

“It may not be able to possible to achieve everything for everybody in the corridor because of the narrowness of the [street] and where it’s located,” said the firm’s Elliot Rhodeside.

The West Main Streetscape project got underway in the fall of 2013 but lay dormant for much of last year after former Mayor Satyendra Huja expressed his dislike for the plan shown to City Council.

Rhodeside said three distinct concepts were developed in order to remind the steering committee of what the various trade-offs could be between parking, bike lanes and wider sidewalks.

One concept is an update of the design previously presented to the council that would feature bike lanes, wider sidewalks and on-street parking alternating from one side of the road to the other.

Another would remove the bike lanes in a four-block section in Midtown in favor of enhanced sharrows that could be painted green. This would increase the number of on-street parking spaces from 85 to 105.

A third option would eliminate all on-street parking in the same section in favor of 14-foot-wide sidewalks and two bike lanes.

“For the pedestrian this would be transformative,” Rhodeside said. “[But] no one right now is advocating for one thing or another. These are just meant for discussion.”

In all scenarios, Rhodeside & Harwell is recommending closing the slip lane that allows eastbound traffic to turn onto Ridge Street. That item had been restored by the previous council. That also could involve moving the Lewis and Clark statue.

Rather than a dedicated turn-lane at Seventh Street, a leading turn arrow could be installed at the traffic light to allow quicker access into the train station parking lot.

“We’re trying to look at the pros and cons of these trade-offs,” Waters said. “This group may or may not come to choose one, but I think it’s a service to council to say what they are.”

Peter Castiglione, a co-owner of Maya Restaurant, was concerned that having no on-street spaces would mean delivery trucks would have no place to unload their goods for West Main businesses.

Starr Hill resident Pat Edwards also did not like the idea of removing all parking.

“I think that option would be very detrimental to [First Baptist Church] and it would make our existence tenuous,” Edwards said.

“Those cars in busy traffic don’t have anywhere to go,” Baxter said. “It would create a bit of a choke-point for us.”

Scott Paisley, representing the cyclist community, said sharrows would be too dangerous on a road that carries more than 16,000 vehicles a day.

“It seems like it meets the Council’s complete streets resolution, it serves all mode of traffic, it’s safe and everybody gets something that they wanted,” Lloyd said.

Planning Commissioner Genevieve Keller said she did not believe removing all on-street parking spaces was politically viable now, but she predicted it would be within 30 years.

“I wish we were bold enough to consider option 3,” Keller said.

Rhodeside and his team will compile a list of pros and cons from the first two options for further review by the committee. The proposal to remove all parking will not go forward.

A proposal to rezone West Main Street to remove the possibility of 101-foot-tall buildings will go back to the Planning Commission on Feb. 9.