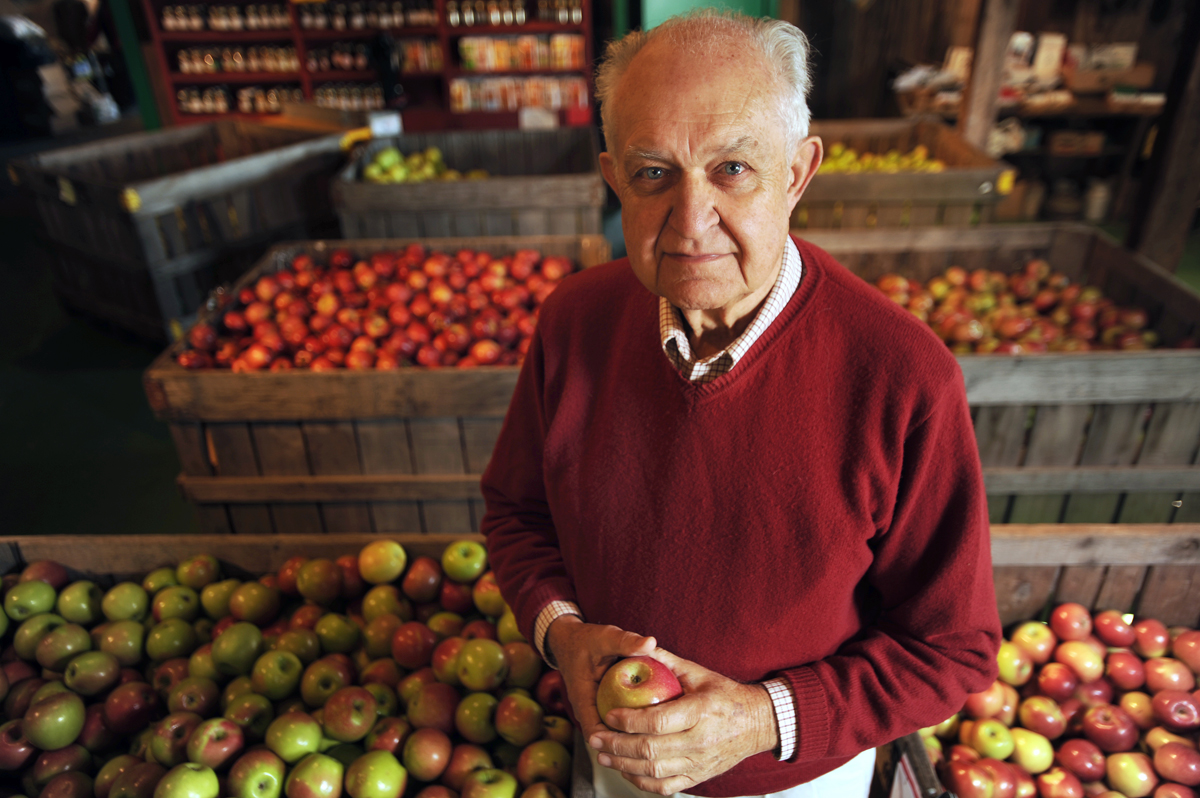 In September, the Tom Tom Founders Festival announced the winners of its 2015 Founding Cville award which highlights local artists, civic leaders and entrepreneurs “whose groundbreaking and original work has impacted Charlottesville and the world.” Charlottesville Tomorrow is republishing the profiles of the nine honorees.

You can’t bite into a crisp Virginia apple bursting with flavor without giving a nod to Tom Burford. Affectionately named “Professor Apple”, Burford comes from generations of orchardists who have pioneered the Virginia apple and revitalized cider making in the Commonwealth. In fact, the Burford Brothers Nursery sourced Rural Ridge Farms very first trees in Albemarle County, and Buford has been the motivating force behind orchards across the country.

If you want to learn the art of correctly eating an apple (yes, there is a right way), pick up one of the books he’s written, “Apples: A Catalog of International Varieties” or  “Apples of North America: Exceptional  Varieties for Growers, Gardeners and Cooks” (winner of the 2014 American Horticulture Society Book Award).

Tell us about yourself and your connection to apples:

I was born into 18th, 19th and 20th century Virginia families that were academicians, as well as dirt farmers and orchardists. Since 1715 the Burfords were fruit growers with apple, peach and pear orchards.  My great grandfather had a pear collection with over one hundred varieties. Subsequent Burford generations pursued the same intensity with peaches and apples.

As a youth I saw snags of dying 100 year-old fruit trees They were infected with the Fireblight disease that decimated pear and apple orchards during the late 19th and early 20th centuries. The laments, conversations and adventures in the fruit world dominated my families’ oral and written histories. It was never a doubt that I would not commune somehow with the earth.

What sparked your initiative?

Surrounded by orchards and fruit culture, one was expected to be involved in it even if one chose to practice other professional disciplines, which I did. There was an entrepreneurial diversity and it was exhilarating and continues to this day.

What experience shaped your work ethic?

In 1945, I was 10 years old and my father was bedridden with arthritis for a number of years. He began conveying messages and work orders through me to his orchard and farm workers. He also “allowed” me to make and distribute the payroll for the employees. It was cash stuffed in envelopes making allowances for early credit payouts from entries in the ledgers that I painstakingly kept.  It opened another world to my ten year old brain, the world of finance and personnel relationships.

When you were “starting-up” did you seek advice?

A 3,000-volume home library of classical and modern literature and broad spectrum of nonfiction became my adventure companion for answers and imagination. As I entered the teen years my parents assigned me the task of reading all volumes of the Encyclopedia Britannica, twice.

Who were your key early supporters?

My parents understood without explanation the career paths I pursued and were extraordinary listeners and devil advocates. My interaction with the thriving Monacan community and the black community gave me at an early age a look into other cultures and esoteric knowledge they could offer.

Describe your daily routine. How has it changed over the years?

At the age of 10, another significant event happened.  I was given a journal and told by my parents to use it daily.  For 70 years, that has been my first act of the day.  Now that my business organization closed, I start the day writing for two or three hours and then meet with volunteer organization representatives, clients and business associates with whom I still consult The day’s activities are long but always enjoyable.  There is always the joy of discovery.

How do you find people to bring into your organization?

Before dismantling Burford Brothers in 1997, to devote full time to consulting and education, I would bring on board those with a passion for horticulture and agriculture.  Often, one of my goals was to help employees build a wall around their unbridled passion, one of total idealism without practical achievement. Once realized and controlled, it was a formula for success. Repeatedly, today I see unbridled passion bringing frustration and failure. It is the role of the mentor to point out the paths that individually bring contentment and rewards.

What kind of culture existed in your organization? How did you establish it?

The art of agriculture is again surfacing and it can be exemplified by the dynamic new American cider industry with the role of ciderist parallel in my opinion to that of the creative chef.  Our rich history in food culture is one untapped source of inspiration coupled with that of modern technology.  The new American agriculture founded on localized food production has brought forth a new culture and a new agriculture language. The cider industry that I so strongly advocate has had phenomenal growth.

What would you like Charlottesville to become?
To continue to recognize and cherish that it is a place of creativity, historical memory and citizen well-being and happiness.  Above all, that it continues to be a fertile ground for entrepreneurship.

What, if any, were some of your challenges?

I was blinded and blessed by isolation and the established course of my education. This society was a microcosm that easily offered itself to analysis and affectation. It was a simple life in a time of world war and emerging technology that began to usurp agriculture politically.

When do you decide (if ever) to give up on an idea?

Never, really.  If results were not forthcoming, I would make another approach from another direction.  Often, it was idle waiting for other new ideas, but never abandoned.  I learned that lack of progress was a waiting station not a negative answer. Problems often need rest. The wrong solution compounds the problem.

What have some of your failures been and what have you learned from them?

Societal rejection made alternative energy solutions for agriculture submerge in the 1970s but the energy problem is again there for consideration. Lumber and grain drying, livestock shelter warming, domestic hot water heating and lighting isolated place, alternative energy “dreams” that never materialized, but I yet have hopes.

When did you realize you were successful? What was a defining moment?

Most often, I have to be told or reminded.

Do you believe there is a specific formula to becoming a successful entrepreneur? If so, what is it?

Yes, recognition of the road to success and an unwavering discipline and deliberateness with every step taken.

It’s OK to brag, what are some of the numbers that showcase the success, or show how successful this has been in your industry?

Publication and the accolades of my books, especially, Apples of North America, the many requests to lecture and recognition by my colleagues of my contributions to horticulture and agriculture.

It was my experience and knowledge of the history of agriculture (apples and cider, specifically) and the value of it to commerce that triggered my actions to re-establish it.

What gives you persistence?

The self-persuasion that it would work and my track record in other disciplines, like developing and marketing a solar domestic hot water system called Sunwater.

The success of others inspires me, particularly when I am a party to it.

How do you decide who to invest in or support?

They must reflect discipline, integrity and respect for others and they do not prematurely celebrate.

Who are some of the new up and comers that remind you of yourself? Or that you are impressed by?

It might sound self-congratulatory, but my unofficial students–including a landscape architect that I mentored for four years and is now one of the best professional orchard designers.

My families have for generations identified with the city and watched it become an internationally recognized and admired small city of America that happened because of its founder citizens.

To continue to recognize and cherish that it is a place of creativity, historical memory and citizen well-being and happiness.  Above all, that it continues to be a fertile ground for entrepreneurship. 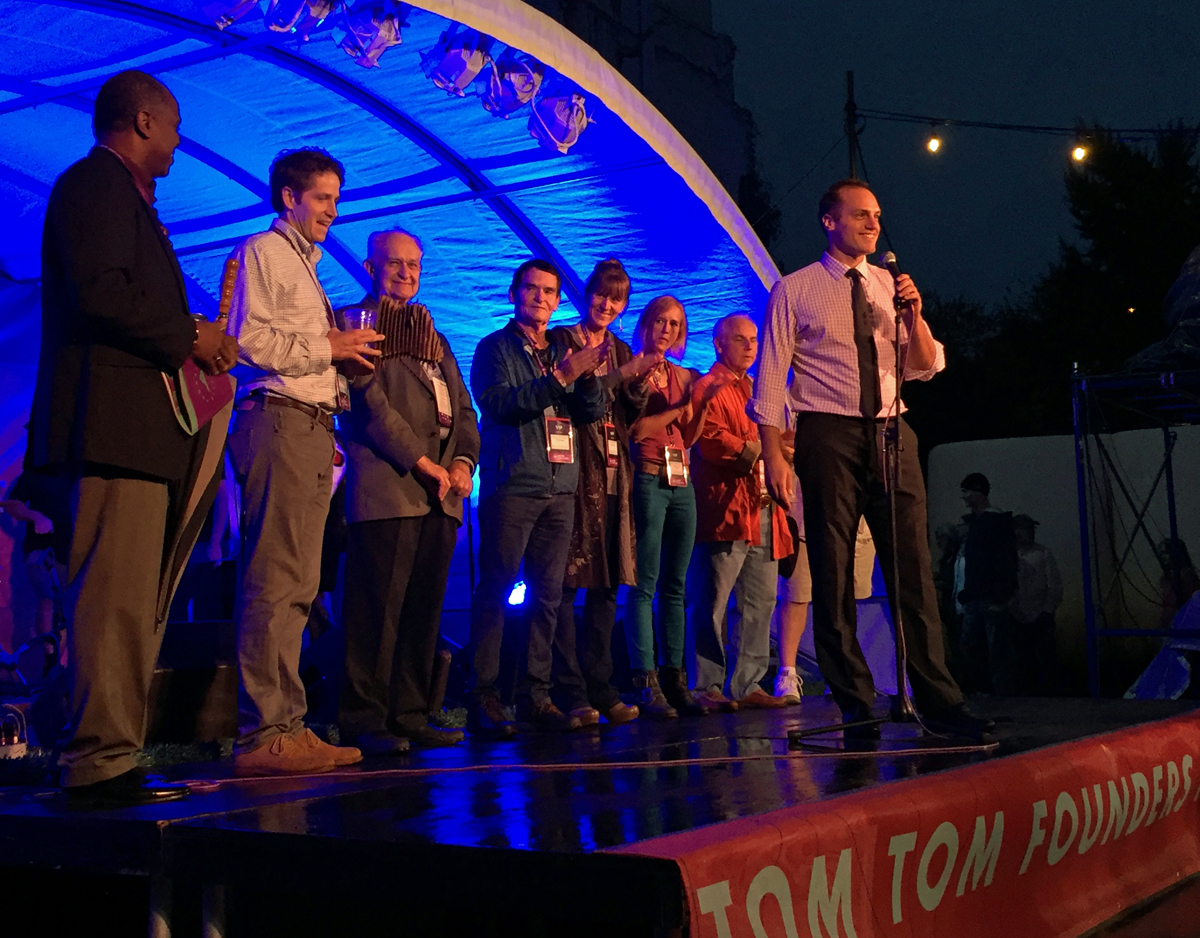