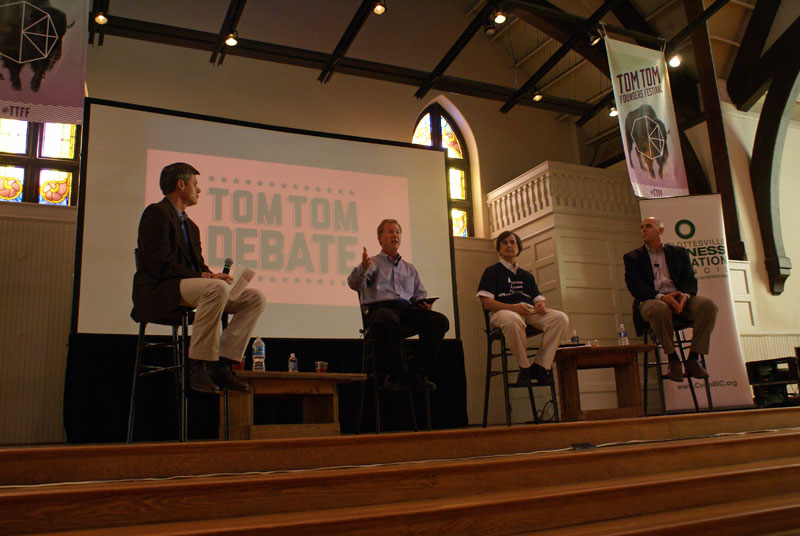 The question of the Charlottesville area aspiring to be a hub for startup companies, a playground for wealthy residents or a bedroom community for the District of Columbia includes whether a choice has to be made.

That was the basic theme of a conversation Friday called “Austin versus Aspen versus Arlington” at the Haven as a part of the Tom Tom Founders Festival.
“One of our interests both from a practical side and a research side is the question of how we create an entrepreneurial ecosystem,” said moderator Mike Lenox, the executive director of the Batten Institute at Darden School of Business.
Gary Henry, executive director of the Charlottesville Technology Incubator, first raised this question in 2006 as a way to spur debate about the region’s economic future.
“When the conversation first started, we were concerned that Charlottesville and the surrounding community would be more of a retirement tourism-based economy,” Henry said. “One of the answers to that question was that if we could actually grow jobs here, what impact would that have on the community?”
Another panelist, Albemarle Supervisor Dennis S. Rooker, said he could think of additional priorities since the region does a good job selling itself.
“My vision of this community is that we protect natural resources and historic places and we put the necessary funds into education,” Rooker said.
A member of the Charlottesville Planning Commission said how to sustain a preservation ethic factored into tension during discussion on the update of the city’s Comprehensive Plan.
“There is a kind of balance between people wanting preservation and those wanting Charlottesville to grow and have more healthy jobs,” said Commissioner Dan Rosensweig.
Last year, the Central Virginia Partnership for Economic Development published a study that recommended several industries that could be attracted here, including biosciences, financial services and defense-related jobs.
Lenox asked the panelists what they thought needed to be done to help bring new companies.
Rooker said attracting large companies could backfire, because if they go out of business, they leave vacuums and lay off employees.
“We are much better off taking good ideas out of UVa and their patent foundation and try to match up these ideas with people and with capital,” Rooker said. “Companies that start here generally stay here.”
Henry said the ideal is to grow companies of around five to 25 employees.
“They can fit into any existing building and post no real infrastructure problem,” Henry said. “Tech jobs grow faster than other jobs and those tech jobs also pay twice as much as non-tech jobs.”
He added that tech businesses need accountants, attorneys, custodians and other support positions that also support the economy and offer jobs to people with other skills.
Lenox said that Austin, Texas, has grown rapidly, and said anecdotally that 1,000 new residents move there each week. He wanted to know if the panelists thought that could happen in Charlottesville.
Rosensweig said he did not think it could because of a stronger culture towards protection of rural resources here.  When he was an undergraduate at the University of Texas in the late 80s, Austin’s leaders were planning for infrastructure that attracted companies such as Dell.
“It became clear why the infrastructure was being built, but it subsumed communities in the vicinity of Austin, places that had been distinct places,” Rosensweig said. “I don’t see that as the future of Charlottesville.”
“I certainly hope change occurs in the community, but I hope it occurs over time and gradually rather than suddenly because if we find an employer that will hire 3,000 people at once, that would change the community,” Rooker said.
Henry said one of the obstacles to the area becoming a technology hub is the lack of enough venture capital. Rosensweig said there is a lot of potential capital that does not enter into private business.
“A lot of people make money elsewhere and then come here to live a lifestyle,” Rosensweig said. He suggested local governments look into directly funding startup firms.
Rooker said that would be too much of a risk.
“Nine out of 10 startup companies fail, so I don’t see a role for county to fund startups,” Rooker said. “What we need to do is create the best setting we can to attract people.”