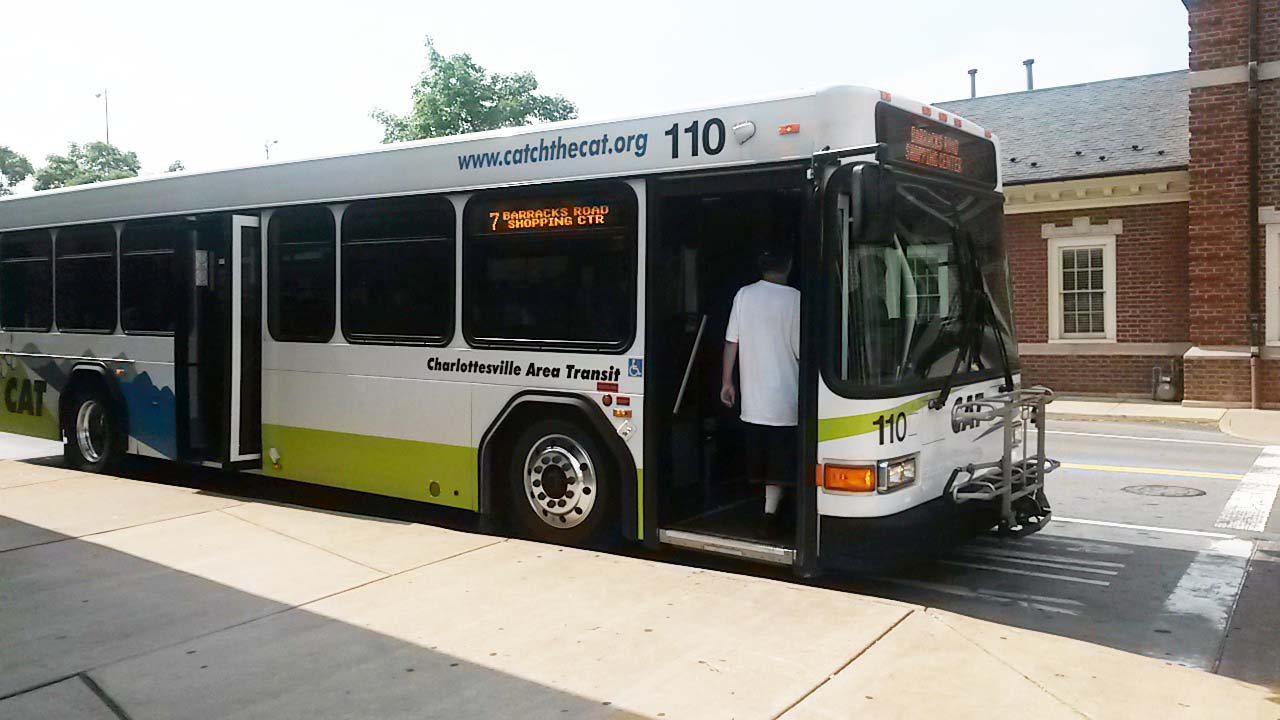 A CAT bus picks up riders at the Downtown Transit Station

The regional planning commission plans to begin studying ways to improve the area’s transit systems to grow overall ridership, but the review most likely will not lead to the merger of city and University of Virginia bus services.

The direction to Boyle by members of the Planning and Coordination Council, PACC, kicked off another round of discussion about improving regional transit.

In 2006, Albemarle officials floated the idea of such an authority as a way to both pay for more routes into the county and to have more say over the system’s governance.

The City Council and the Board of Supervisors supported the concept and in 2009 successfully lobbied the General Assembly for permission to form an authority.

However, the General Assembly did not agree to allow the city and county to hold a referendum on whether a sales tax increase should provide revenue to fund the authority. The referendum would have only gauged voter support and not actually raised taxes.

Additionally, the University of Virginia opted not to participate.

Earlier this year, Supervisors Diantha McKeel and Brad Sheffield asked the city and the county to lay out their positions on whether the idea should be studied again. McKeel and Sheffield are PACC members, along with two city councilors and the top leadership at UVa.

In a June memo, UVa transportation officials said their fleet is not subsidized by federal or state governments. Use of that funding comes with strings, such as the inability to use their buses for charters or parking lot shuttles.

“The loss of control and flexibility over University service levels under an Authority or combined system would compromise our transportation system,” wrote Rebecca White, director of parking and transportation at UVa.

UVa officials pointed out that University Transit Service and Charlottesville Area Transit collaborate and do not have significant overlaps. Additionally, anyone with a UVa ID can ride on a CAT bus for free in exchange for a payment from UVa to the city of about $180,000 a year.

Charlottesville has hired both a new city manager and a new transit manager since the last discussion. Those officials both raised concerns about changing the status quo.

“What is keeping us from moving forward?” said Sheffield, as he also disclosed he is the executive director of JAUNT.

Sheffield said the county wants to proceed with adding more service, but he needs to understand what obstacles and issues the localities have with joining forces in an authority.

“The first and foremost issue is funding,” City Manager Maurice Jones said. “Other issues are the governance issue and who would sit on the governing board and expanding service beyond our region.”

A UVa official was skeptical as well.

“I’m hearing conceptually that you’re talking about a lot of qualitative things … about saving money and expanding service,” said Patrick D. Hogan, the executive vice president and chief operating officer at UVa. “I’m not sure you can do both.”

Sheffield said he wants to study what could happen if the city and county could pool their resources.

“When the last [regional transit authority] study was done, it was a shot to the moon,” said Sheffield, referring to one potential concept that would have created a bus rapid transit system for well over $100 million.

This time around, Sheffield just wants to explore ways to get more bus routes throughout the county’s urban ring.

Councilor Dede Smith said it would be good if the university could share data on where its employees are to help with the regional effort. Hogan agreed to share the information.

“Let’s look and see where there are opportunities to connect better and hand-off passengers better,” said Hogan, adding he understands that UVa employees make up a good percentage of the region’s traffic.

Sheffield said he would be glad to get the data.

“While [the university] might not want to fund a route from Hollymead, I would love to know how many university employees might use that route,” he said.

Boyle will return to the PACC in November with more information.

The TJPDC will not hire a consultant but will do the work in-house.