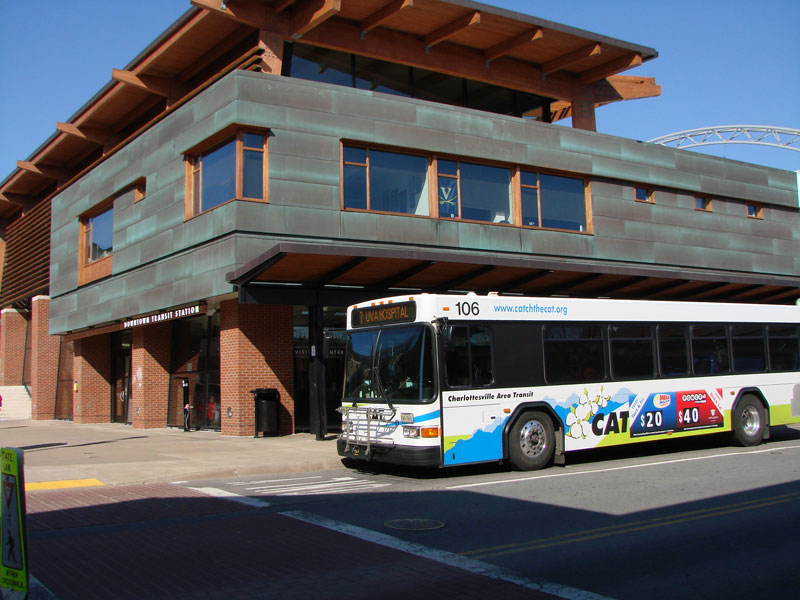 As Charlottesville prepares to develop a new transit plan for the next six years, the City Council has expressed concern about a 15 percent decline in ridership from 2013 to 2017. Councilor Kathy Galvin saw an early version of these statistics in January through her position on the Metropolitan Planning Organization, a regional transportation committee.

“There was a lot of data that showed ridership drops and that’s kind of why I wanted to get this presentation before us,” Galvin said at Tuesday’s council meeting.

However, Transit Director John Jones told the City Council that much of the decline is normal.

“These declines tend to be cyclical. In the past 25 years, there have been three periods of declining bus transit ridership,” he said.

Part of what drives the cycle is the waxing and waning cost of owning a car. Since the ridership decline began in 2013, fuel prices have gone down and fuel efficiency has gone up.

“As the economy rebounded, many returned to the workforce and started driving again,” Jones said.

Of those still riding the bus, elderly and disabled people make up a disproportionately high number. When CAT conducted a survey of passengers last March, it found that 39 percent of riders are over 50 years old and 11 percent are disabled.

The declines match national trends for cities like Charlottesville.

“Large bus systems on average … have seen declines of about 2.2 percent,” Jones said. “Small systems, similar to ours here at CAT, have unfortunately been hit a little harder.”

Jones does not see rideshare apps as a major cause of the decline.

“A lesser factor — and we can’t really determine just how much of a factor these are — are the transportation network companies, such as Uber and Lyft,” he said.

Public transportation advocate and former council candidate Paul Long is less concerned about the decline than about how much transit affects residents’ quality of life. He wants the City Council to expand neighborhood bus schedules to include weekends and public holidays.

“The downtown businesses are complaining about loss of business, but there are hundreds of thousands of people who rely on public transportation who would love to come down to the Violet Crown movie theater and other businesses downtown,” Long told the council Tuesday.

Jones said if the buses that currently run hourly were changed to twice per hour, the total cost would be $2.6 million per year. The city currently pays less than a third of the $8.1 million transit operating budget, but that contribution would have to increase with expanded service.

Forty-one percent of bus riders own at least one vehicle, according to the 2017 CAT survey. One way to combat the decline in ridership is to tempt those in this demographic to take the bus more frequently.

“When I get off work at Pantops, I have to wait an hour and 45 minutes,” said frequent CAT passenger Helen, who preferred to keep her last name anonymous.

“I get frustrated, because the 7 and the trolley go to the same place, but they come at the same time,” said Naur, another passenger who said she had just missed both buses on their way to the University of Virginia hospital. “I like the bus, but it could be better.”

More than changes to the bus schedules, some riders would like to see more bus stops.

“My daughter ran out into the street at night,” recounted one rider, who didn’t want to give her name. “It would be better if they had another bus stop across the street.”

Bus routes have expanded into more neighborhoods in recent years, and to some riders, that has made a difference.

“Now there’s a stop near Wegmans, so I don’t have to walk down to Belmont [to leave home],” said CAT passenger Tyana. “But they should put a light on the bus sign. Sometimes, the bus comes over the hill and drives right past me.”

The Virginia Department of Rail and Public Transportation requires all transit systems in the state to develop a transit development plan. Both CAT and JAUNT currently are developing their new plans.

Jones told the City Council that potential changes to routes could be addressed in the update.

“[The new plan] has some massive restructuring of many of our neighborhood routes. We will have a lot to talk about once we receive that document at the end of July,” he said. “I don’t think the public will see a lot of changes, and the ones they will see, they’ll like.”

Another route under discussion is an express bus to the Charlottesville-Albemarle Airport.