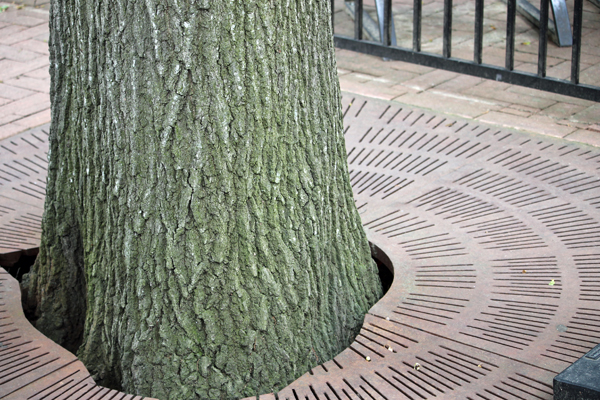 An assessment of trees along the Downtown Mall identified metal grates at the base of trees as a threat to the long-term health of the mall's trees.

Charlottesville has lost approximately 5 to 7.5 percent of its urban tree canopy in the last 10 years, according to the annual Tree Commission’s report to City Council.

During his presentation Monday to Council, Tree Commission Chair Paul Josey said the group updated the Urban Tree Canopy Assessment for the city in 2015.

“We found that there was a change between 5 to 7.5 percent loss of the overall canopy within Charlottesville for the past 10 years,” Josey said. “That’s between 350 and 500 acres of trees that have been removed in Charlottesville, there’s also been some plantings, but that’s overall the loss that has been determined.”

Although 70 acres have actually been replanted, 5 to 7.5 percent figure is a “significant amount of loss” for the city’s urban tree canopy, Josey said.

The Urban Tree Canopy Assessment found 45 percent of the city is covered by urban tree canopy, although this is a higher percentage than several other comparably sized cities in similar regions identified in the report, such as Shaker Heights, Ohio and Woodstock, Virginia.

The study said the loss in canopy might be due to development of forested lands, as well as the Meadow Creek Restoration and Meadow Creek Sanitary Sewer Interceptor Replacement Projects.

Private developments, however, are required to meet certain canopy cover thresholds and several of the municipal projects have included replanting efforts — therefore, both developments and projects might contribute positively to canopy cover in the years to come.

The report said the Meadow Creek projects, for example, removed invasive ailanthus trees and trees that were falling into the creek, but replaced those trees with native and riparian species.

“Replanting efforts [at Meadow Creek] have been made to the maximum extent practical to replace canopy lost,” the report said.

The report also said the rate of loss of canopy has declined over time and 18 percent of the land area for the city was identified as vegetated and possible for new plantings.

When City Councilor Kathy Galvin asked Josey what he considers to be the most pressing issue facing the city with regards to tree canopy, Josey responded that figuring out how to plant more trees is an important consideration.

Josey said Charlottesville plants about 100 to 200 trees a year, but other cities like Fredericksburg plant about 600 trees annually.

Planting new trees can be expensive due to maintenance costs associated with them, such as watering and applying mulch for weed suppression, Josey said.

In terms of paying for such costs, Josey referenced several initiatives throughout his presentation, including the Tree Commission’s advocacy for the restoration of the Urban Forest Management Fund in the city’s Capital Improvement Plan and developing a long-term goal for a public and private tree planting plan.

“We hope to work with the [Charlottesville Area] Tree Stewards and really improve our canopy throughout the city and in these areas that we’ve identified as low canopy areas,” Josey said.

In an email to Charlottesville Tomorrow, Josey said the city does not currently have a set canopy goal, “although the city is meeting the targeted Chesapeake Bay program goals of between 40-50 [percent] canopy coverage with 45 [percent].”

Josey also said an important consideration is that the majority of the city’s canopy is on private land.

“With the majority of city canopy on private land, always at threat from development and large scale removals, our goal is to remain proactive and protect this percentage as the city continues to grow,” he said.

According to the report, 72 percent of total citywide urban tree canopy is on private property.

During his presentation, Josey also referred to an assessment of trees along the Downtown Mall that was prepared for the city in 2015.

“The Charlottesville Mall is … a beloved space that everyone loves and goes to, and taking care of those trees should be paramount to the mall’s success,” Josey said.

The assessment found “tree base and paving conflict is the most serious and immediate threat to the long- term health of the trees” and proposed removing the cast iron grates and steel plates at the base of trees along the mall.

The oak trees expand at about ½ inch per year and the grates and plates are cut to expand the space for the trees as they grow. The assessment found that when the grates are cut with a saw to make room for tree growth, however, the saw often cuts into the trunk of the tree.

Similarly, the assessment observed that trees are being damaged when a cutting torch is used to cut steel plates because the torch heats up the plate and can burn the bark of trees.

Josey explained this impact to the City Council.

“Some of [the recommendations of the assessment] are removing the grates that were installed [in 2009] because when they cut the grates they have to burn the grate and that actually burns into the cambium of the trunk essentially, where that’s the main life support of the tree,” Josey said.

The assessment suggested replacing the metal grates and plates with compressible foam placed between the pavement and soil to accommodate the growth of the tree while upholding the paving.

Other recommendations included pruning down the height and spread of larger trees to allow help smaller trees on the mall grow and replacing red maples in the plaza area near Second Street with a species that will fare better.

Galvin said there needs to be a way to turn some of the solutions in the report into policy, but Josey said there are funding issues associated with recommendations and that there is no funding in Parks & Rec budget to specifically pay for maintenance of mall trees.

Charlottesville Mayor Mike Signer said he agrees with Galvin that there needs to be a way to turn the report into policy.

“I would agree, I think that figuring out a mechanism to translate the report into policy, guidance, recommendations is really quite essential,” Signer said.

Councilor Kristin Szakos ended the presentation by taking note of the watering bags placed at the base of some of the city’s trees.

“I would just like to offer a little bit of levity. I have an 8-year-old friend who said that she could tell that Charlottesville liked its baby trees because they all wear diapers.” 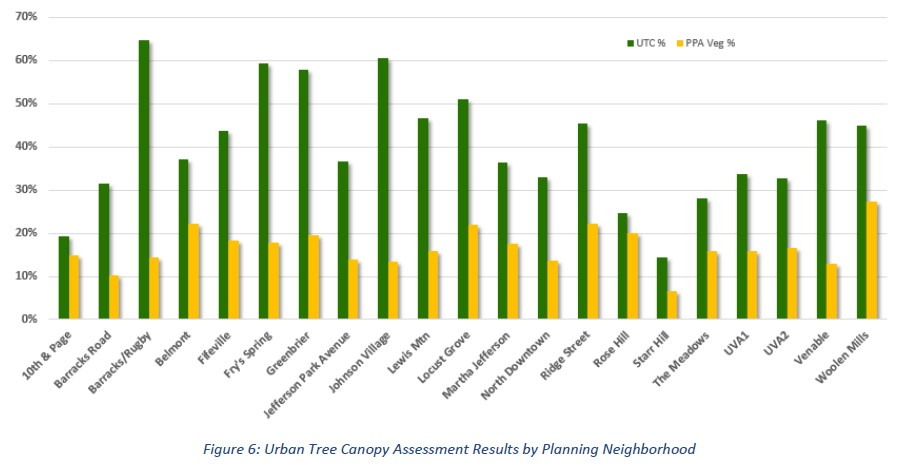