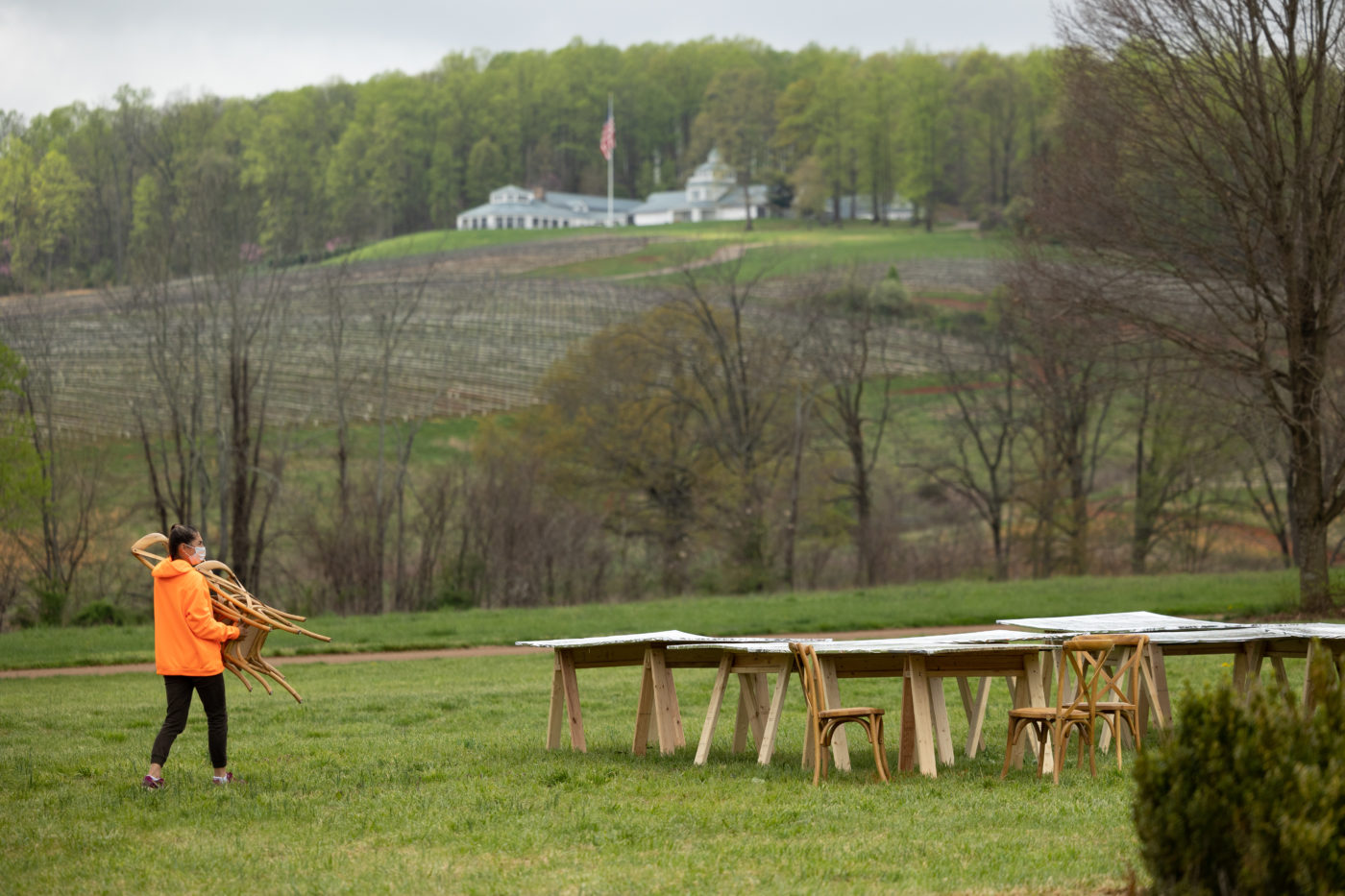 Artist Ana Teresa Fernandez carries chairs to her "TRUTH Table" sculpture down the hill from the Trump Winery.

Be the first to know!

Get headlines directly to your inbox.

“Truth Farm,” an art installation dedicated to conversations about immigration, sits nestled between hills on a family farm located within the Trump Winery property. On April 10, a crowd of about 50 gathered near a greenhouse for conversation and a shared meal atop a 90-by-20-foot sculpture that spells out “TRUTH.”

The table was constructed with wood and mylar emergency blankets — which have been used to warm migrant families along the U.S.-Mexico border —  faces the Trump estate and its message can be best seen from the hills above.

“These blankets have become an ubiquitous symbol of children who have been separated from their families, said Ana Teresa Fernandez, the artist who created the sculpture. “Even though you have a neighbor that’s incredibly toxic, the land right next door can be the complete opposite. We want to create this mirror of what it is to have positivity and constructiveness in ways we can share and let people in as opposed to excluding people.”

Created by Fernandez,  local philanthropist and entrepreneur John Kluge Jr., and Deputy Director to the U.S.-Mexico Foundation Enrique Perret — the multimedia art event was to spark dialogue about immigration.

The project was born of an idea Kluge first conceived in summer 2019 and evolved to include local and international artists. Following dislike of former President Donald Trump’s stances on immigration, Kluge launched a GoFundMe to establish a flag recognizing the collaborations between the United States and Mexico on his property. The surrounding Trump Winery,  formerly Kluge Estate Winery and Vineyard, previously belonged to Kluge’s mother, Patricia Kluge. Operated by one of Trump’s sons, Eric, the Trump Winery notes on its website that it “is not owned, managed, or affiliated with Donald J. Trump or any of his affiliates.”

As the overall project evolved from a single flag to a series of artwork, Kluge calls the use of mylar fabric “the flag of this space.” 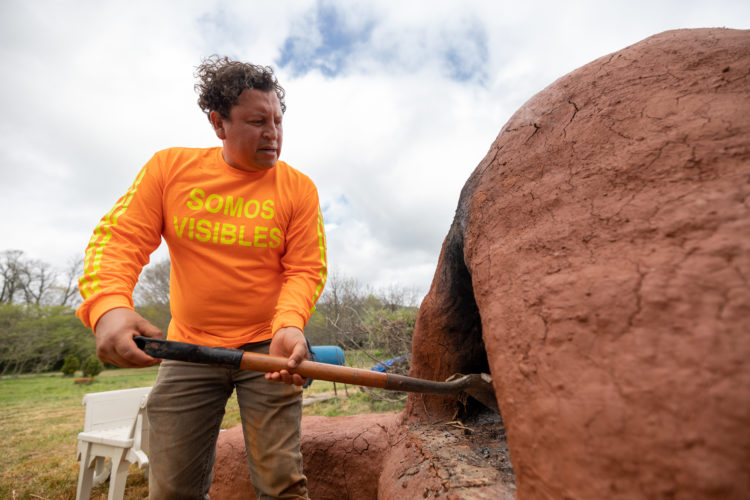 Artist Ron Rael bakes bread to be shared at the unveiling of "Truth Farm."

As Kluge serves on the board of the U.S.- Mexico Foundation, it was during conversations with Perret that he connected with various artists and “Truth Farm” began to take shape.

University of California, Berkeley, architecture professor and artist Ronald Rael constructed a clay oven titled the “horno sin muro,” or “oven without borders.” Attendees baked bread within it to serve on the “truth table.”

Rael has also gained  national attention for his seesaw installation at the U.S.-Mexico border wall. The organizers and artists involved in “Truth Farm” hope that their work can inspire shared understandings to lead to constructive change.

For instance, Perret referenced President Joe Biden’s January executive order that preserved the Deferred Action for Childhood Arrivals (DACA) protections for children of undocumented immigrants as an example of immigration practices he hopes can improve in the U.S. 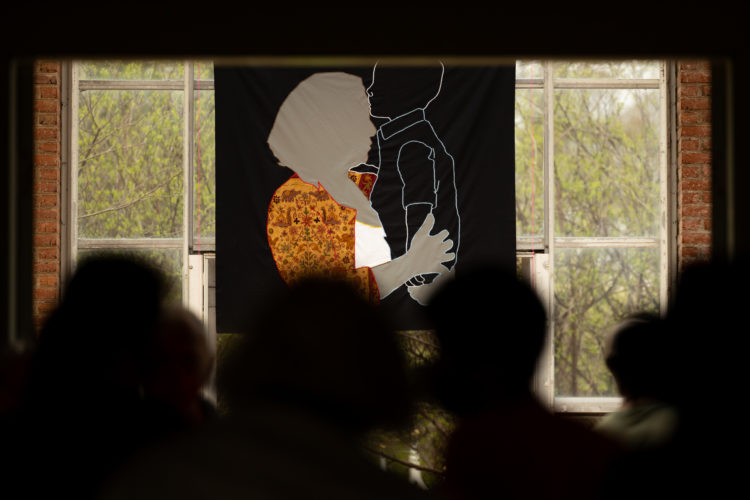 Portraits by artist Arleene Correa Valencia surrounded the walls of a greenhouse as part of the "Truth Farm" installation.

Other installations included mylar-constructed kites by local artist Federico Cuatlacuatl, a musical performance by Lua, and portraits by Arleene Correa Valencia. Valencia had also previously collaborated with Fernandez on shirts reading: “Somos Visibles” or “We are not invisible” to highlight undocumented essential workers in agricultural and wine industries of California, not unlike the agricultural and wine industries in central Virginia.

Hunter Smith, of Champion Brewing and Champion Hospitality Group, also created a special beer that will be available this summer, and whose proceeds will go to Creciendo Juntos — an organization that provides resources and community for Latino residents of Charlottesville and Albemarle County.

Artwork from “Truth Farm” will also be moved to both Champion Brewing and the nearby IX Art Park in downtown Charlottesville to be more widely viewed by the community in the coming weeks.

Trump Winery could not be reached for a statement on Saturday. 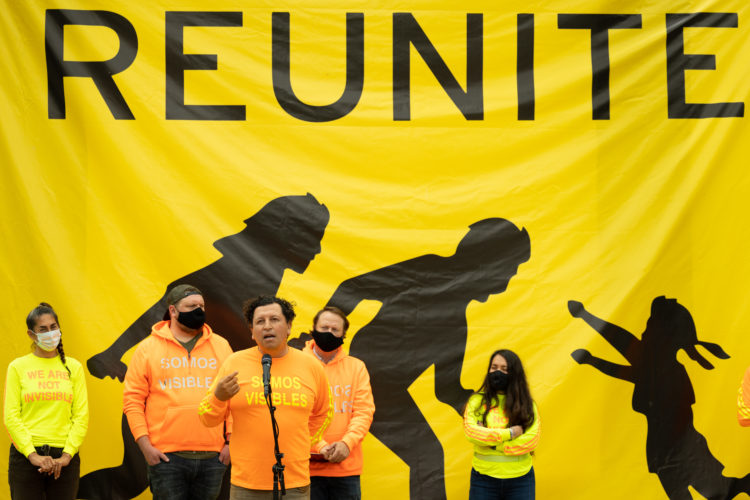 Artists and organizers speak during the April 10 unveiling of "Truth Farm."