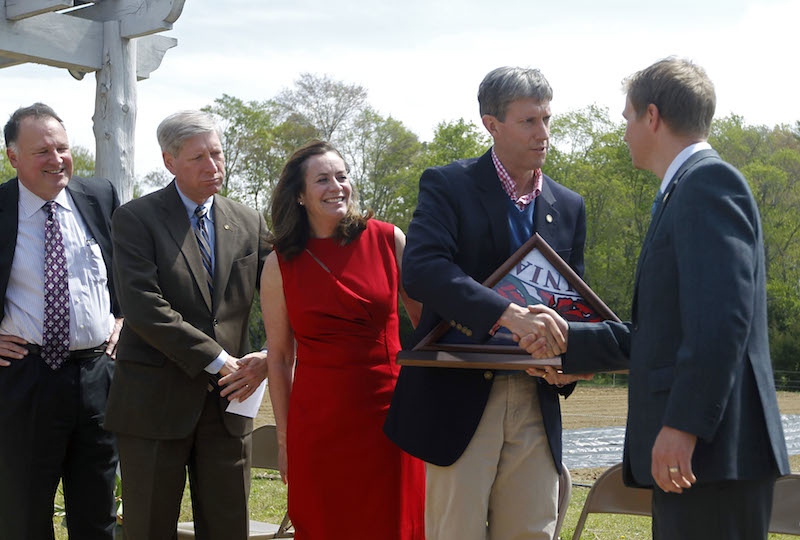 A British poultry company plans to invest $2.3 million to open a specialty production and processing plant in Crozet, its first operation in the U.S., officials announced Thursday.

The Kelly Turkeys USA facility is expected to create 33 jobs and is one of two agricultural operations planned in Albemarle County. The other, Twenty Paces, will produce sheep and goat’s milk cheese, creating seven jobs and operating at Bellair Farm less than a dozen miles south of Charlottesville. Officials gathered at Bellair to announce plans for both operations.

Kelly will use the money to renovate a historic barn and purchase equipment for plucking, said Albemarle County Supervisor Jane Dittmar.

A branch of a British company known for its unique breed of turkeys, the KellyBronze, Kelly USA plans to offer 100 percent Virginia grown premium turkeys. The company dry-ages and dry-plucks its turkeys, and the birds spend the majority of their lives outside, officials said.

“We want to bring back the flavor of what turkeys used to taste like, the way they are supposed to taste,” said Kelly’s Judd Culver.

Twenty Paces plans to invest $391,000 in its Bellair site, which officials said will be the largest facility in Virginia to produce sheep’s milk cheese products and the only farmstead operation milking sheep and goats.

“It’s amazing to see the support from the counties and Virginia in agriculture,” said Twenty Paces’ Kyle Kilduff. “This is three years in the works and we hope to pass down the knowledge of cheese and fermented dairy products to other dairy farms. They are a great value added product and help preserve more farmland.”

Founded in 1971, Kelly recorded sales of 4.5 million pounds – or almost $7 million – last year. Kelly’s birds have been named the best free-range turkeys in the United Kingdom for eight years running, according to the company’s website.

Popular among foodies, the company boasts on its website that its turkeys are “quite proudly a product of one of the slowest farming methods in the world.” It’s a return to the old way of doing things, Culver said.

“I’ve been in agriculture my whole life and it’s amazing that our population now doesn’t actually know where their food comes from,” Culver said.

“I welcome these new businesses because economic development and agriculture are important to the economic efforts we have been making to increase agriculture and forestry in Virginia,” Landes said.

McAuliffe tapped the Governor’s Agriculture and Forestry Industries Development Fund, which Haymore said was created three years ago to keep opportunities for agricultural and forestry enterprises from slipping through the cracks.

“There were no incentive funds to partner with localities to help this great industry grow,” Haymore said.

Grants for Kelly and Twenty Paces were a natural. “It moves the needle here and really makes a difference,” Haymore said.

“Agriculture is so important to our future and our families,” she said. “We have incredible food production that’s going to serve our local community and beyond. We also have economic activity that will sustain our rural community.”