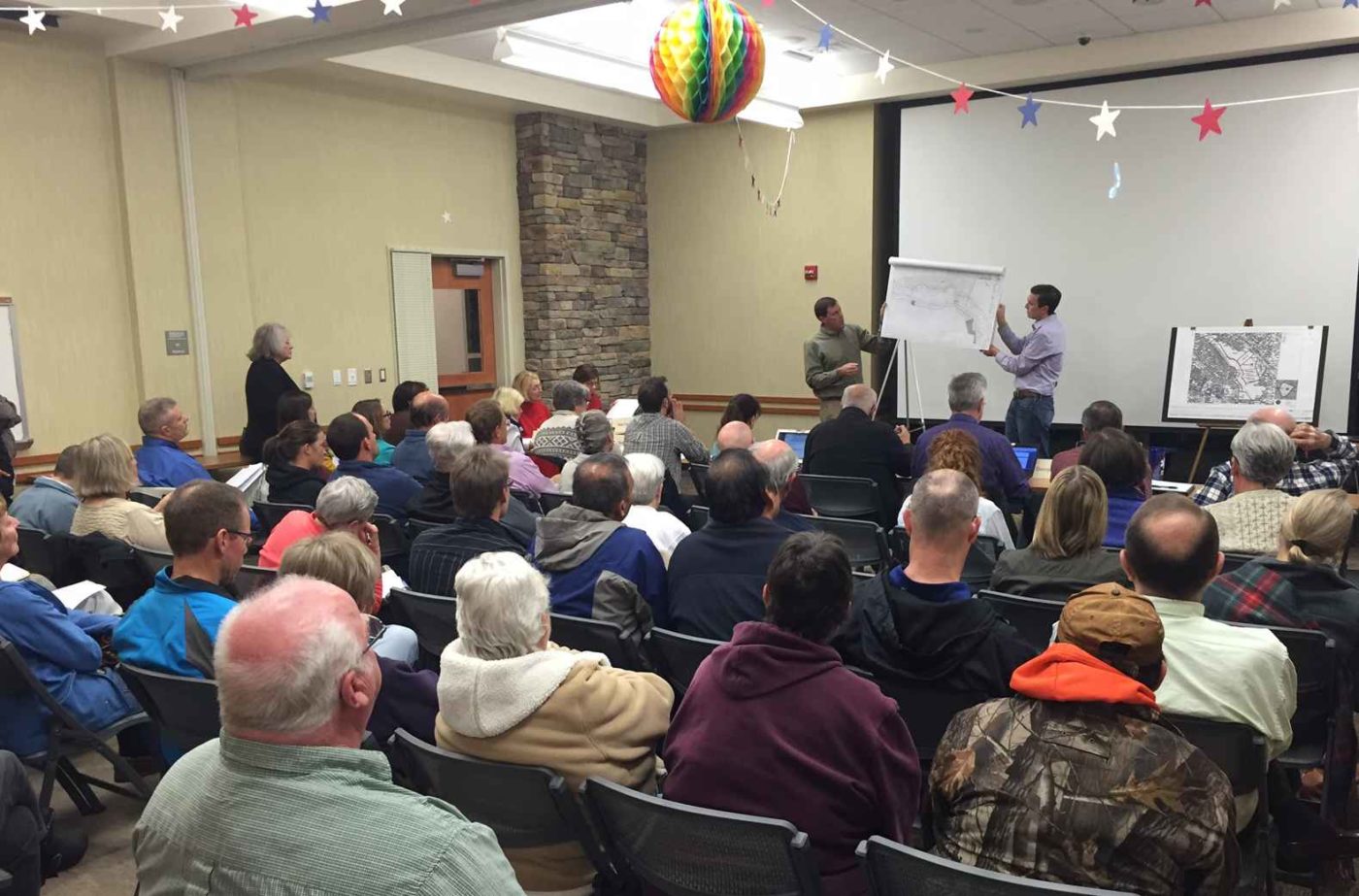 Southern Development representatives explain the request in the Crozet Library

A standing room-only crowd filled the community room at the Crozet Library on Wednesday to hear about two proposals for additional homes in Albemarle County’s western growth area.

The first proposal before the Crozet Community Advisory Committee was a forthcoming special-use permit request from Southern Development to build a new bridge that would allow the extension of Cling Lane to serve a new 80-unit development in the West Glen neighborhood.

“This is a starting point and we’ve not submitted an application,” said Charlie Armstrong of Southern Development. “We want to get in front of this group first before we get way down the road.”

“For us, this would destroy our neighborhood,” said Penny Chang, who said children play in the cul-de-sac that would be eliminated.

Another man was concerned the additional road connectivity could encourage more tractor-trailers to travel through his neighborhood. Another person wanted to know where children would go to school.

Many in the room had never attended a community meeting and were not aware that the Crozet Master Plan and the county’s zoning ordinance designates the land for residential development that can have up to six units per acre as long as every rule is followed.

“Albemarle has planned for development in Crozet,” Armstrong said.

At one point, the conversation got heated after one woman demanded to know when the development had been approved.

“They have not had an approval to subdivide this into lots,” said county planner Rachel Falkenstein.

However, that would be something reviewed administratively by staff. The only item that needs approval by the Board of Supervisors is a request to build a bridge in the flood plain.

“The neighbors can definitely come to express their concerns about the stream crossing, but once that’s approved it will be a by-right development,” Falkenstein said.

Members of the CCAC encouraged Armstrong to explore another option to avoid removing the cul-de-sac, and he agreed to do so.

“There will be time for the group to revisit the topic,” said Jennie More, the CCAC chair.

“The developers are here and they’re listening and we’ve had experience where they have lowered [the number of] units and done things to become better neighbors,” she added.

The second item was a chance for developer Kyle Redinger to present a rezoning request for a new development near Cory Farm that would be called Adelaide.

“There’s a lot of people who want to move to Albemarle County, and we need to find homes for them in the growth area,” said Redinger, who wants a rezoning to allow for additional density than permitted under current zoning but that is within the expectations of the Crozet Master Plan.

Redinger said the new neighborhood would be similar to Wickham Pond or Dunlora Forest.

“This is one of the few remaining properties in the county where we can build this kind of development,” he said.

However, Planning Commissioner Tom Loach said he felt Redinger misunderstood the master plan, which recommends lower densities on the edge of the plan’s area. He also said the committee does not favor a dense development that enters onto U.S. 250.

“While it can be zoned from three to six units per acre, that does not mean that it is preferred,” Loach said. “This is not a site where there should be this sort of density.”

Both developments are expected to be reviewed further by the advisory committee before action is taken by Albemarle County officials.