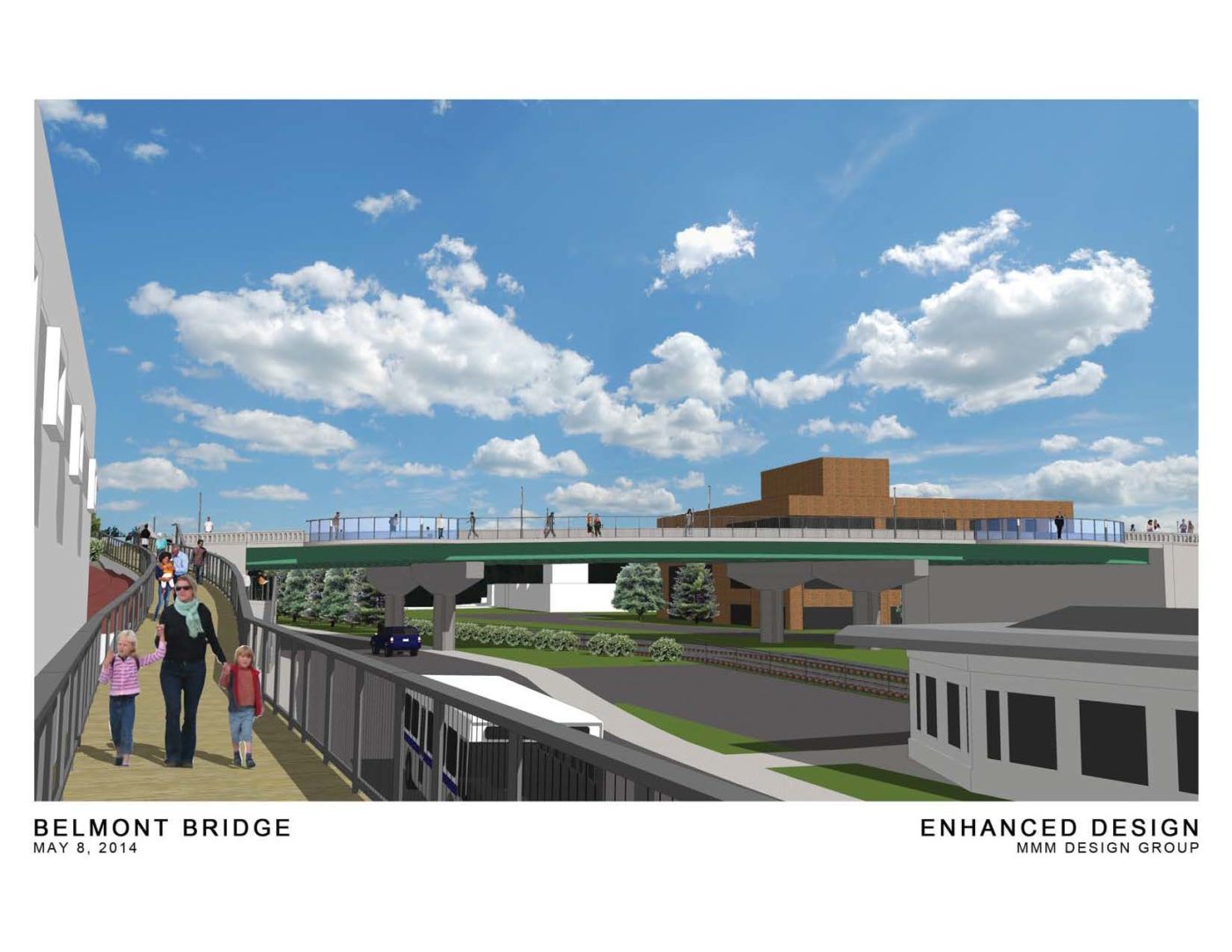 Rendering of "enhanced" MMM bridge, May 2014

More than five years after hiring the engineering firm MMM Design to craft blueprints for a replacement of the deteriorating Belmont Bridge, Charlottesville City Council voted 4-1 Monday to proceed with one of the company’s concepts.

But councilors were unanimous in dismissing an option to route Avon Street underneath the railroad tracks owned by CSX.

The underpass option was developed in the middle of a process that dates back to April 2009, when the city hired MMM to conduct preliminary engineering for a replacement bridge to cross the tracks.

The city had opted to build a new bridge rather than repair a structure built in 1961. The 440-foot bridge has a sufficiency rating of 47.6 out of 100 according to the Virginia Department of Transportation.

After MMM’s replacement bridge was unveiled to the public in late 2011, Belmont residents, including filmmaker Brian Wimer, argued the design did not meet the aesthetic standards of the city and that a highway bridge was not an appropriate way to connect the neighborhood with downtown.

Wimer organized a design contest that was augmented by the participation of the University of Virginia School of Architecture. The winning entry envisioned removing the bridge altogether in favor of an at-grade intersection with the railroad.

After the contest, the city hired the landscape architecture firm Siteworks to work with MMM to sift through the entries to come up with ways to enhance the aesthetics and the pedestrian experience.

Siteworks commissioned Rounsevell to participate in the project. They came up with both an enhanced bridge as well as an underpass that would travel underneath the railroad, Water Street and Old Avon Street.

At a public meeting in February 2013, underpass supporters accused the city of inflating its cost estimate to $30 million rather than the $13.8 million Rounsevell had provided.

Council directed staff last September to work with MMM to flesh out the specifics of the “enhanced” bridge, but left the underpass option on the table.

This spring, MMM unveiled two versions of an enhanced bridge which at 205 feet long would be less than half the length of the original replacement bridge.

Council was presented with four options Monday that had been analyzed by Chris Weatherford of the firm Barton Malow.

The separate iconic pedestrian bridge concept had a cost estimate of an additional $3.5 million.

Jim Tolbert, the city’s director of neighborhood development services, recommended pursuing an enhanced bridge due to concerns that a nearly 9 percent grade on Avon Street heading north from the underpass might require the city to restructure Market Street to accommodate a gap between the two roads.

Before the votes, Rounsevell implored Council to move forward with the underpass, and accused city staff of a lack of transparency.

“In February 2013, we attempted to present two options,” Rounsevell said. “[They were] a thinner and visually lighter bridge, and out of respect for the competition-winning entry, an underpass. Both options included a new, elegant pedestrian bridge.”

“As a result of this end run by [city staff], we are now presented with three insipid bridge alternatives that do nothing to advance the quality of urban design one would expect,” Rounsevell added, suggesting that MMM should return the $400,000 they have been paid for their work.

First, all five councilors described why they could not support the underpass.

“I know this has been a long, hard fight, and unfortunately it should not have been,” said Councilor Dede Smith said. “I loved the idea of the underpass at first, but I just have a lot of concerns with the reality of it, with the depth of it, and the slope of it.”

Smith said the 9 percent grade would be too steep for cyclists and pedestrians. She also questioned whether the bridge really should be an “iconic” gateway.

Councilor Kristin Szakos said she was concerned the pedestrian experience through the underpass would not be comfortable with “high concrete walls up” close to traffic. She said the option’s higher cost would likely need to use city taxpayer dollars and would divert resources from other capital investments the city needs to make such as renovations at Buford Middle School

“We have a lot of things that I can imagine we would want to do with that money without spending it all on particular project,” Szakos said.

Councilor Kathy Galvin said she weighed her selection on five criteria: transportation function, how it fits into the urban context, aesthetics, feasibility and cost.

Councilor Bob Fenwick said he had wanted to repair the bridge rather than replace it, but he had become convinced he did not have the votes to proceed with that option.

“Part of my responsibility on this Council is that if my ideas don’t carry the day, I have to work toward consensus,” Fenwick said.

City staff also informed Council that switching to a repair project would invalidate the $12.1 million in funding set aside to date for the replacement project. The Belmont Bridge would have to compete with other candidates for bridge repair funds from across VDOTs Culpeper district.

Fenwick also said he did not consider the bridge to be a barrier between neighborhoods as many underpass opponents had claimed.

“Our city has grown into one of the most beautiful cities in the country with that bridge there now,” Fenwick said.  “It serves a function and the money is going to be an issue. We only have so much and we have so many other things around the city to take care of.”

After deciding to move forward with a bridge, Council swiftly removed the arch bridge and the original replacement bridge design from consideration. That left the cheaper enhanced bridge on the table.

Galvin tried to persuade her colleagues why they should vote to hire a new team to start the bridge design process from scratch.

“I’m still not convinced this is a new alternative,” Galvin said, adding she was concerned the structural design produced by MMM for the enhanced bridge is too similar to the original replacement bridge concept.

“I have this feeling and concern we’ve essentially delayed this process on deciding what kind of infrastructure to put in this location unnecessarily for two years only to come back to the original structure that the public has rejected,” Galvin added.

However, her resolution to let MMM go and hire a new team did not get any support.

“The enhanced bridge is definitely what we’re getting at and what we’re working for,” Szakos said. “What we did before when we had this issue was to tack on another design team to MMM and I’m not sure that’s worked as well as it might to have MMM bring on a design team of their own.”

Staff prepared another resolution to have MMM complete construction documents for the bridge and to have staff come up with a plan to close the funding gap.

“It looks pretty intact,” Smith said. Her motion to require an inspection was included in the resolution that passed 4-1 with Galvin voting against.

Councilors wanted to ensure there would be programs in place to assist businesses during construction.

“Businesses can probably bet on losing 30 percent of their gross [sales], and we have to be cognizant of that,” Fenwick said.

“We’re working on a plan to address that,” said City Manager Maurice Jones. “It would be a general plan we would try to utilize for any of these construction projects in the future, and that will be in place before we do anything with the bridge.”

Under the option selected by Council, work on the bridge can be sequenced in a way that will not require the bridge to be closed for a long period of time.

“It will take a little longer overall for construction, but [it] can be built by maintaining a lane of traffic,” Tolbert said.