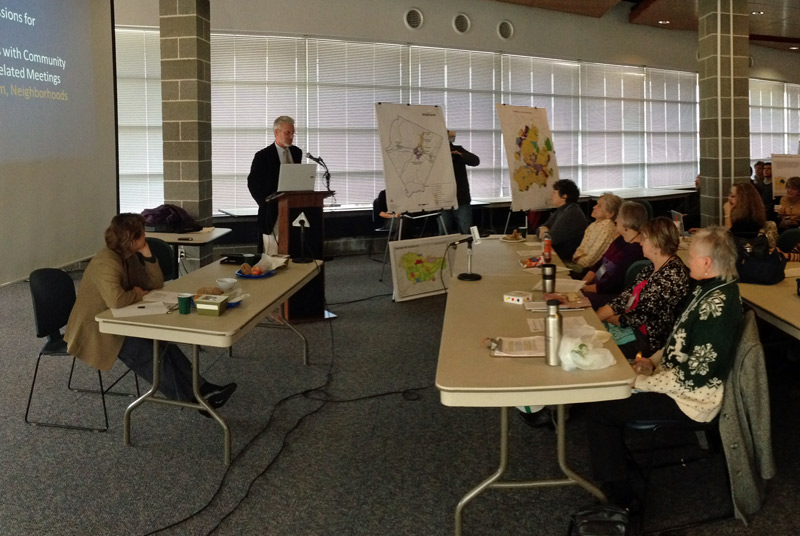 When it comes to comprehensive planning, there is no quick fix, no brief conversation, and sometimes no end in sight to the public meetings.

However, Tuesday’s luncheon of the League of Women Voters of the Charlottesville Area put local planning in both a historical and forward looking perspective. It also made clear there is a time to get involved in the discussion shaping the community, and that time is now.

After an hour of presentations by local officials, the burning question was a simple one: How can pedestrians cross U.S. 29 in Albemarle County’s northern growth area?

“I’ve heard a lot about walkability, and yet there is no place to legally cross Route 29 on foot north of Angus Road,” said an audience member. “Rio Road, Hydraulic Road … every year in Albemarle County somebody gets killed. How is this addressed in the Comprehensive Plan?”

The question was posed first to Albemarle’s planning director, Wayne Cilimberg, who said U.S. 29 would need significant time and money to be reinvented.

“We have a vehicular corridor created long ago for the primary road system to move automobiles,” Cilimberg responded. “That emphasis has been the priority for a long time …. It’s going to take time to reinvent those corridors to become more pedestrian friendly.”

Charlottesville City Councilor Kathy Galvin observed that Albemarle’s master plan for the corridor, approved in 2011 and known as Places29, proposed some fixes.

“The premise of [Places29] was to create parallel roads and grade-separated interchanges,” Galvin said. “There would have been a way to cross over with a smaller road …. That was shelved and I think right now that’s the struggle; there is no easy way to make that kind of arterial [road] safe.”

An audience of about 40 people listened to Cilimberg and Galvin at the Albemarle County Office Building on Fifth Street. The pair presented a unified vision for attractive urban areas and a protected rural countryside, long hallmarks of the Comprehensive Plans, which are now nearing the end of a multi-year update process.

However, while the audience seemed comfortable with terms such as “walkable” and “livable,” others such as “density” and “verticality” seemed to raise a few eyebrows.

“I thought some of it was sloganeering,” said county resident Deborah Brooks. “Density has been touted for at least 40 years … if you have high density, you have to have a crack public transit system. Otherwise, you are going to have increased traffic.”

Galvin said the city’s vertical growth and redevelopment has to be done carefully and promote both walkability and transit.

“Do we develop parcels or create places?” Galvin asked. “I am always thinking about implementation. It has to translate into a tangible place that embodies our principles.”

She highlighted the economic benefit of recent projects approved on West Main Street, including a hotel and mixed-use student housing project. Galvin said the two projects would increase the real estate property tax contributions from a combined $68,000 annually today to almost $1.2 million when completed.

“We are actually helping raise revenue to the city that can go back to our schools, back to our social services, back to creating wonderful streetscapes, parks and trails,” Galvin said. “None of that is free.”

Cilimberg said smart planning in the city was a benefit to the county.

“Their Comprehensive Plan really influences the success of our Comprehensive Plan,” Cilimberg said. “We are in this together. The city is the heart of our urban center, if you will, and has its part to play in relieving the rural area of development pressures.”

The League’s luncheon facilitator, Martha Levering, said she once tried to read the Comprehensive Plan when it “was so heavy you could hardly lift it.” She complimented Albemarle for trying to simplify its plan and make it more accessible to the public.

Both localities have upcoming meetings with public input opportunities on their respective Comprehensive Plans.

The Albemarle Planning Commission’s Feb. 12 meeting will focus on issues related to the neighborhood model and Monticello’s viewshed. A final draft plan is tentatively scheduled to go to a public hearing on March 5.

The Charlottesville Planning Commission‘s Feb. 12 meeting will focus on land uses and community values. A public hearing has been tentatively scheduled for April 9.