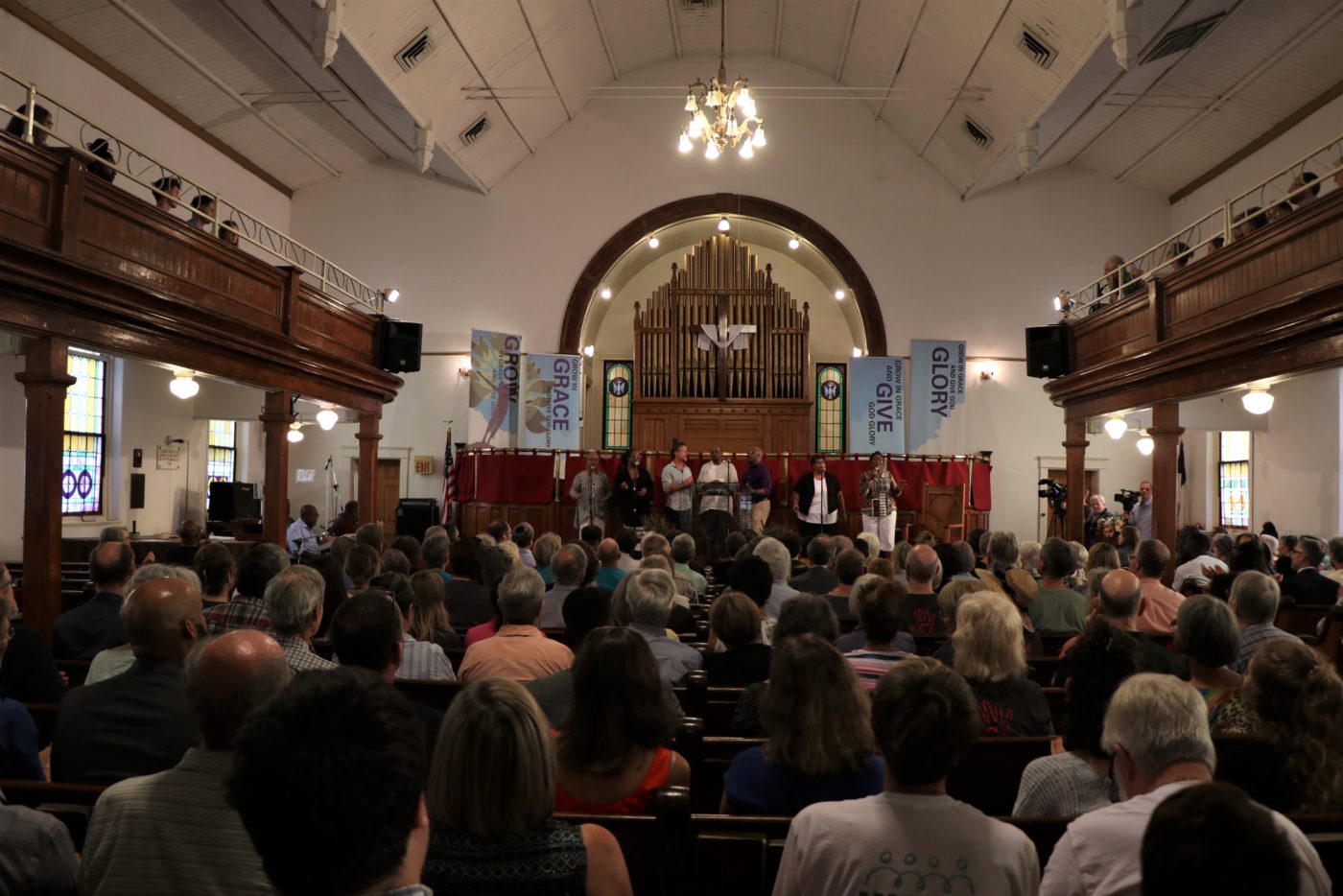 More than 200 people gather in the sanctuary of First Baptist Church on West Main Street in Charlottesville for an interfaith service hosted by Charlottesville Clergy Collective.

2020 Democratic presidential candidates were slated to attend, backed out

Navigating troubled waters was the theme Monday evening at Charlottesville Clergy Collective’s interfaith service. The service at First Baptist Church on West Main Street aimed to bring together the city’s diverse communities to remember the area’s inequitable past, honor victims of Aug. 11 and 12, 2017, and celebrate  coming together for a more equitable future.

“The intention this year is to remember not only what happened in August 2017, but the racism and hatred in our country which is still a lived experience for people of color in Charlottesville,” said Rabia Deborah Povich, of the Inyati Sufi Order.  “It’s also to honor those who have worked against racism and to point towards a just future.”

The event, held this year as a part of Unity Days, first occurred following the events of August 2017 and again last year on Aug. 10.

Povich, a speaker at the event, is involved with the collective, which was first formed by the Rev. Alvin Edwards, pastor of the Mount Zion First African Baptist Church. The collective is made up of people of various faiths with a focus on race relations in Charlottesville and Albemarle County.

“It is a testament to all of you to come out on this day,” Don Gathers, a deacon at First Baptist and organizer said in his opening remarks in the near-capacity sanctuary.  “I want to welcome each and every one of you from your various houses of faith on this evening. We aren’t coming together because of what happened two years ago in our community, but in spite of it. It’s important that we are there for each other in the spirit of love and of harmony and of unity. Our community still faces a tough road ahead. But it’s this type of spirit that will pull us through.” 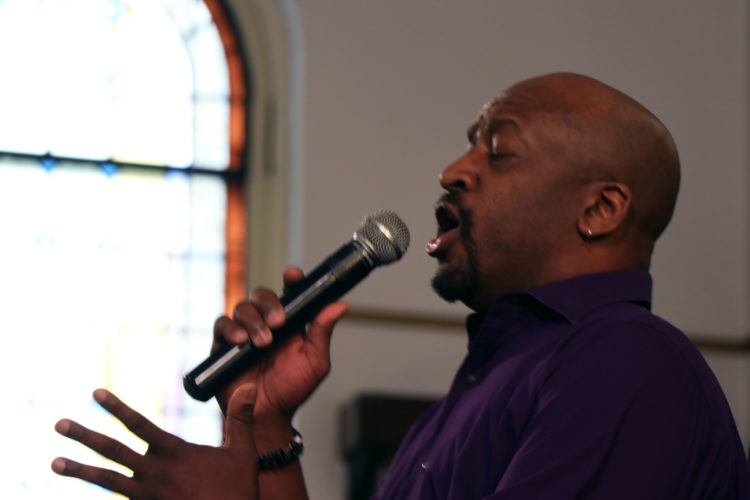 A member of First Baptist Church takes the lead on a song.

Apostle Sarah Kelley, pastor of Faith, Hope and Love International Healing and Deliverance Center, and the Rev. Michael Cheuk, of University Baptist Church, led the congregation in a communal singalong of “Wade in the Water,” to which a standing ovation concluded before Elizabeth Shillue, a Quaker, introduced a series of speakers to give testimony.

Activist Tanesha Hudson spoke to give praise to community organizers and activists before speaking about the constructive work that lies ahead for the Charlottesville community.

“The world is watching Charlottesville. How we recover is going to lay down a blueprint for how the world recovers. Everyone in this room is in this room because you believe in change, but your actions need to follow,” Hudson said.  “People who are not of color, you need to take the time to understand people of color. You need to understand how we feel the way we feel. I want a moment of silence not just for the people we have lost, but we need to remember the people who were hurt physically and emotionally that day. The people who suffered the majority of that day were people of color. The systemic issues that still play a part after Aug. 12, we have to continue to pay attention to that stuff.”

The Rev. Jill Duffield, editor of the Presbyterian Outlook, spoke about her time living in South Carolina, and to how it began her awakening of systematic racism in the U.S. She recalled being surprised by the shootings in Charleston and the rallies and attacks in Charlottesville because she “had the privilege to be surprised.”

“It was a loud bellwether of what would be our future. I owe an apology to my African American siblings, to my Jewish and Muslim ones, too, and many others,” she said.

Aug. 12 survivors Courtney Commander and Marissa Blair, who were with Heather Heyer on that day, gave testimonies to the gravity of that day before a moment of silence.

“What I want you guys to take today is love. To chose love. Even though people may be hateful towards you or our ideals. You literally have to love the hell out of people,” Blair said.  “Be kind, be gentle. you don’t know what anyone else is going through. We’re hurting, and I know you’re hurting, too. We are all facing our own battles, and we’re in this together. Community helps us, and community makes us stronger. If we hate, we’re like them. If we love, we bring ourselves together and become a community.”

Rabbi Tom Gutherz, of Congregation Beth Israel, reflected on how the actions of 2017 and beyond affected him and the Jewish people.

“Most people in our community have experienced garden variety antisemitism, … but by and large the public hatred of Jews was thought to be a thing of the past. Then came Aug. 12 in Charlottesville,” Gutherz said. “Since that day two years ago, we’ve had conversations with our children and our friends that we never had before. The Unite the Right rally was the coming out of a movement that had been growing out of the dark web.  Before Aug. 12, maybe we didn’t pay a lot of attention to this.”

Gutherz also acknowledged the various ways in which people of Jewish faith or heritage have been designated as white and how he hadn’t thought too much about the Confederate monuments he passed in town on his way to synagogue.

“Part of the change for me on Aug. 12 was that I needed to change my way of thinking about racism in this country, to understand its tenacity, its violence, and its legacy,” Gutherz said. “How it has shaped every aspect of this nation, as well as it’s invisibility to me as a person designated as white.”

Buddhist Sharon Beckman-Brindley led the group in contemplation before various songs and prayers were under way by other faith leaders in the community. 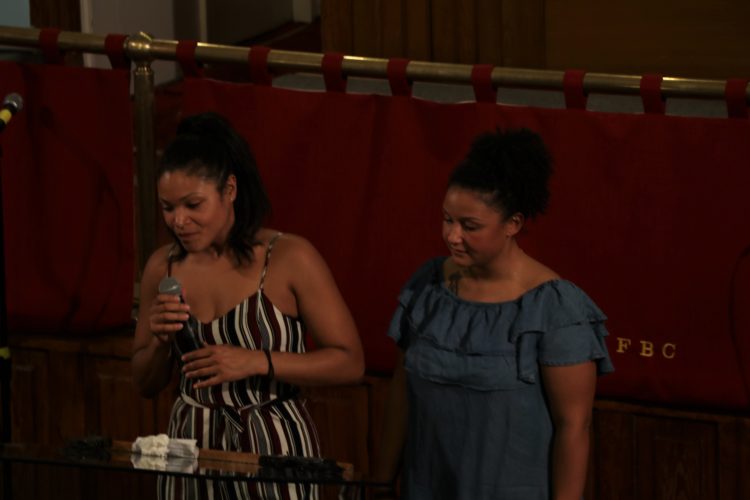 Marissa Blair and Courtney Commander, survivors of Aug. 12, 2017, who were with Heather Heyer that day, spoke on the loss of Heyer and moving forward. "What I want you guys to take today is love. To chose love. Even though people may be hateful towards you or our ideals. You literally have to love the hell out of people," Blair said.

Ahead of the event, 2020 Democratic presidential candidates were expected to be hosted in the church’s basement for a reception before attending the service themselves.

“We had some candidates that wanted to come down to be with us, so I put together a small reception for them to meet some of the community and some of the public, and to have the opportunity to make a presentation because I’m not giving them the opportunity to speak during the service. That’s not the time for a political platform,” Gathers said to Charlottesville Tomorrow earlier Monday.

However, over the weekend, Booker pulled out due to the discovery of high lead levels in Newark’s tap water. Moments before the event, Gathers informed the crowd of about 50 that de Blasio had communicated to Charlottesville City Councilor Wes Bellamy that he would not attend.

“This reception was birthed to give him a platform and opportunity to reach out to the community, if he chose to,” Gathers said. “It is my perception, which could be completely wrong, but apparently because he wasn’t given the platform that he wanted he has chosen not to attend.”

The Rev. Carol Carruthers Sims said she was first contacted over email by a member of de Blasio’s staff about his potential appearance.

“Why they thought it might be a good forum for him to attend is that he’s married to an African American woman and they have biracial children,” Sims said. “They felt that their heart was with us in Charlottesville, even though he wasn’t here in [2017]. Being in a biracial marriage with children, he thought it’s something the community might benefit from seeing and hearing from a couple.”

In the wake of learning that de Blasio would not show, she then told the crowd, which included many local activists, to keep up the good work they’ve been doing in working towards equity and healing in the community.

Gathers apologized for the event taking another turn, to which several audience members responded, “It’s not your fault.”

“Some of my favorite people in Charlottesville are in this room, ” replied another.

Gathers then opened the stage to anyone who wanted to speak, so several attendees plugged other upcoming Unity Days and other events before attendees mingled and socialized ahead of the interfaith service.