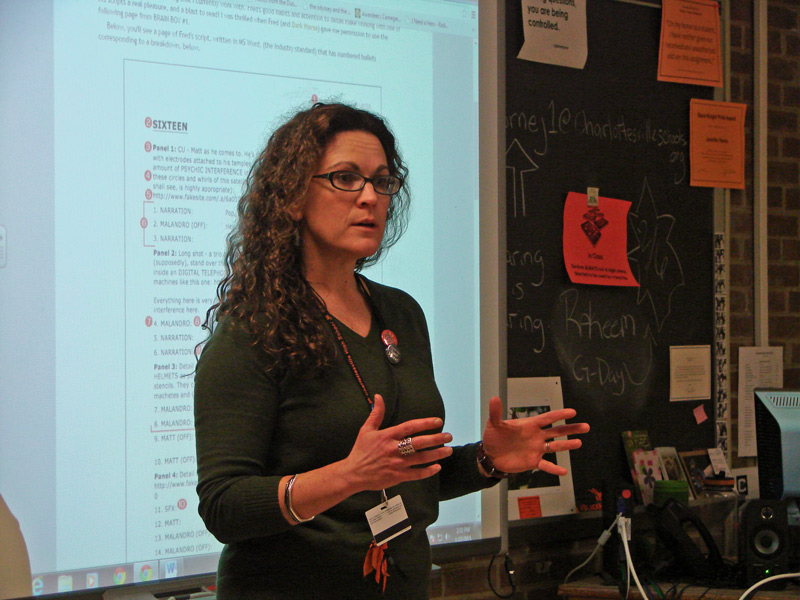 Some teachers at Charlottesville High School are bucking a long-standing educational practice.

For many years, under a system commonly referred to as “tracking,” students have been placed in either academic- or honors-level classes based on their records of academic success.
But Jennifer Horne, an English teacher at CHS, thinks there’s room for another approach.
Now in their third year, Horne and her colleagues have been teaching in what is called an “unleveled” model, in which classes contain a mix of students of all success levels. Within an unleveled class, students are given the option to pursue the course for either academic or honors credit — the latter requiring additional coursework beyond what academic credit calls for.
“The unleveled classes have been able to wake kids up to their own intelligence and possibility in a way that no amount of teacher-to-student cajoling has been able to in the past,” Horne said.
Teachers structure the unleveled English classes — which currently serve 302 students in grades 9, 10 and 11 — around “essential questions” that are designed to make students debate, challenge ideas and practice higher-order thinking skills.
For example, recent weeks of English teacher Nicole Carter’s classes have responded to questions such as: “What constitutes something or someone as good or bad?” and “How do relationships impact our daily lives?”
“When they answer those first questions, they’re not relating it to literature; they’re attacking it from their own personal experience,” Carter said. “And because you have a mixture of kids … the discussion is a lot richer because you have different viewpoints coming from different places.”
Ninth-grader Kayla Gavin said the strategy engages all students.

“It’s more like finding what you
like to do and actually trying to
have fun in English,” Drake said.

“It makes the entire class have to think about stuff that we wouldn’t normally think about,” Gavin said.
While students share common course content such as books and essential questions, each student is also required to perform outside reading, and students seeking honors credit also must complete a project of their choosing outside of class.
Freshman Inigo Drake praised the method, saying that he values the freedom that many of his other courses don’t provide.
“It’s more like finding what you like to do and actually trying to have fun in English,” Drake said.
Emerson Stern, also a freshman, agreed.
“The great part about the project is that it accounts for a large part of your grade and you get to write about whatever you want,” Stern said. “So you can get good grades for writing about things that you’re interested in.”
The discussion-heavy model, Carter said, helps students to develop the confidence to contribute.
“From the beginning of the year until now, they’re opening up,” Carter said. “They’re … more eager to participate and chime in on discussions when they might usually be more prone to just sit back.”
Because students steer their work toward their interests, Horne said she’s seeing students more attentive to their work.
“Students who have previously enjoyed finishing early on writing assignments or reading books with unfocused ease are given layered assignments that will allow them to grow,” Horne said.
But the effort hasn’t come without challenges.
Students cited a weekly 100-page reading requirement outside of class and increased personal responsibility as challenges to the new instructional model.
“It’s not an easy class … you can’t just blow it off because it’s unleveled,” said Kaleb Thorne. “You still have to put in the work.”
“You have to participate a lot more in this class,” Drake said. “You have to be ready to say why you have your opinion.”
“You can’t leave it to the last minute with something like [your project] because that’s your thing,” Gavin said, noting that she’s writing a book of poems for her project. “I think that’s what makes the credit honors credit … because it’s very independent.”
Both Horne and Carter said coming up with the resources for the varying levels of students in one classroom can be a challenge, especially when classes are paced by theme and essential questions, rather than by time or specific subject.
What’s more, Horne said it’s been tough to convince parents of honor-level students that the unleveled classes will meet their students’ needs.
Despite the difficulties, some academic students are opting to complete honors-level work once they get a taste for the culture.
Ninth-grader Justice Walker said he appreciated having the opportunity to switch from the academic to the honors option after the class had started and he saw that he could do the work.
“I started to realize that I needed to do the honors work and get it done because it will look better when I try to apply to college,” Walker said. “And it’s encouraging me to take more higher-level classes because usually I just settle for an academic class, blow it off and get a good grade … but in this class you actually have to work,” Walker said.
The English department’s program is still in a pilot phase, and the high school also offers some unleveled foreign language and government classes.
As the program develops, Carter said it’s important to watch how the students grow both personally and in the classroom.
“Most of the time when you take them and you put them in the unleveled class, it not only boosts their self-esteem, but it also brings out the abilities that they already have in them,” Carter said. “When that’s the norm — to do your work and to participate — then that becomes your norm and that becomes who you are.”