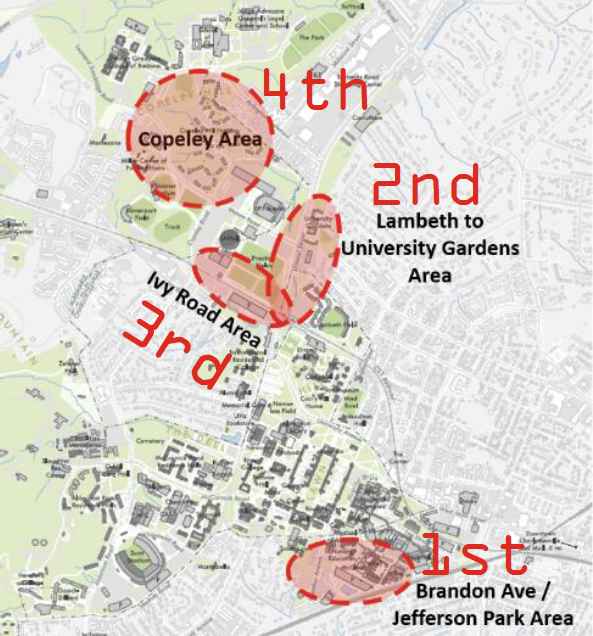 A national real-estate firm has recommended that the University of Virginia consider building a 300-bedroom apartment complex to house upper-class students at a site just south of Central Grounds.

“With the university going across [JPA] and creating the South Lawn, I think Brandon Avenue is probably a natural location,” said Pat Hogan, the university’s executive vice president and chief operating officer.

The university hired the firm Brailsford & Dunlavey in 2012 to study housing options for undergraduate and graduate students. Initial results were shared with the Board of Visitors in April 2013.

The firm conducted a follow-up survey in 2015 to determine its future housing needs. The Academic and Student Life Committee of the Board of Visitors was briefed Friday.

UVa has 6,540 beds in its housing system and has a 97 percent occupancy rate. Of those, 59 percent are traditional rooms with shared bathrooms. Twenty-six percent are apartment units, and 16 percent are suites.

First-year students are required to live on Grounds. Forty-three percent of second-years do so. Fourteen percent of third-years live in student housing, but that number drops to 8 percent for fourth-years.

University officials would like to see those last two numbers increase.

“What’s really important about our residential experience and how satisfied the students are is that it translates into their academics,” said Vice Provost Archie Holmes. “If they are happy in their housing life and satisfied there, what we see in the classroom is that students are well-prepared to come to class.”

A survey asked about 8,000 students what factors they used in deciding where to live. Eighty percent of students want a home with convenient access to classes and the community.

“Location was clearly No. 1,” said Brad Noyes, senior vice president at Brailsford & Dunlavey. “People walk or they take the bus or they bicycle. Having been a student here, I just didn’t move my car. It was just a pain.”

“In the rising third-years and rising fourth-years, there is additional demand if you want to accommodate it,” Noyes said, adding that upper-class demand is almost completely for single bedrooms.

“We do see an opportunity if we were to build in the right place with the right design of unit — we could potentially capture more third- and fourth-year students,” said Allen W. Groves, UVa’s dean of students and associate vice president.

Living in university housing also can be cheaper. The average price for a room on Grounds is $6,349 year, or about $705 a month.

But where to locate new housing?

Of 21 city properties with a Brandon Avenue address, all but six are owned either by the university or its real estate foundation, according to Charlottesville’s online property records.

Of 33 city properties with an Ivy Road address, seven are under direct or indirect UVa ownership.

“At the JPA and Brandon Avenue site, [we] feel that the fabric of the university is much more easily extended to that location than it is to, say, the Ivy Road corridor,” Noyes said.

The recommendation is to create an initial 300-unit, single-bedroom apartment building with further consideration of building 600 more on-Grounds units.

There are no concrete plans, but a proposal will be made at the Board of Visitors’ next full meeting in June.

With space at a premium, there may be competition for the space, which also could be used for research buildings.

“The analogy that I keep using for Brandon is that it’s like the great Western landgrab,” Groves said.

Another factor is the question of whether the university will continue to grow.

“There is one question that we do need to talk about … and that’s enrollment,” Hogan said.

“We will have within the next coming year met the commitment we made to the state about increasing enrollment,” Hogan said. “Are we going to grow enrollment any more? That would certainly impact the need for housing.”

Hogan said he will return to the committee with the pros and cons of potential enrollment growth.