UVa bike sharing on a roll despite hard winter 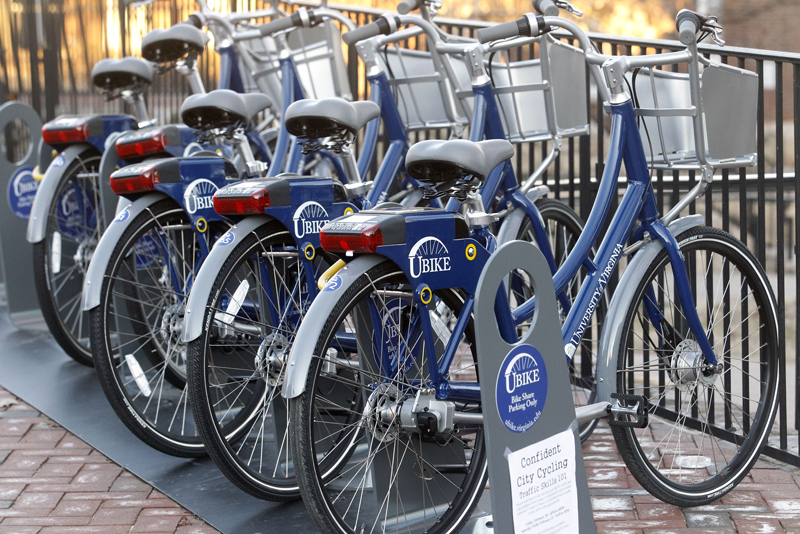 A new transportation option is available for quickly getting around the University of Virginia.

Launched earlier this year, the UBike bike-sharing system is designed to get more students using bicycles without the commitment of bike ownership.

“The UBikes rolling around Grounds are evidence of the growing culture of sustainability at the university,” said UVa student Jennifer Natyzak.

Nicole Duimstra, a student and UBike ambassador, said she uses UBikes for two reasons: “It’s convenient and I want to promote greener transportation.”

UBikes may be ridden anywhere as long as they are returned to UBike hubs, which are located throughout Central Grounds and the UVa Health System.

Students in the McIntire School of Commerce developed the idea for a bike-sharing program at the university back in 2008. UVa’s implementation of the SoBi system was designed with the help of staff in UVa’s parking and transportation department and the UVa Office of the Architect.

Bike-share memberships are limited to 90 minutes per day and there are 120 bicycles dispersed between18 stations around Grounds. You don’t have to be affiliated with the university to access the bikes, making them an option for both community members and visitors.

Membership rates are $20 monthly or $80 for 12 months. UVa students, faculty and staff can use the bikes at discounted rates of $30 a semester or $60 for 12 months.

For those who just need a bike for the day, they can be rented for $5 for two hours, plus $1 for each additional hour.

The UBike features an integrated lock/GPS unit, which allows for users to go online and see which stations have bicycles available for use.

“We provide this service to one other university in the country, with more in the queue,” said Justin Fung, a project manager for SoBi. “We are contracted to provide assistance and a local bike shop has a contract for operations.” Blue Ridge Cyclery, of Charlottesville, maintains the bicycles.

UVa employee Jessica Wegner, who said she was skeptical at first about whether she would use UBikes often, said she has been using one every day.

“I am actually surprised how much I use it and how much I love it,” Wegner said. “I often have to take short trips across Grounds, which normally take me 20 minutes or so to walk. With UBike, I can get there in five minutes.”

If you want to walk with someone after class, using the UBike allows the freedom to leave the bike at the designated rack and pick up another bike at a location convenient to where you are.

“I probably use UBike more because I don’t like biking in the dark or when there is a lot of traffic off-Grounds,” said Duimstra. “It’s nice to have access to a bike when I’m in a hurry but didn’t bike to class.”

Wegner said she wishes there were more locations around town, such as on the Downtown Mall.

“I think once people try it and find out how convenient it is, it will really take off,” she said.

Though cycling to school is popular with students and staff when the weather is warm, UBike users said students shouldn’t be deterred by the cold weather.

“I was using my own bike this fall semester, but considering the snow and my lack of storage, UBike was a more convenient and fun alternative,” said Natyzak.

Wegner said her trips on UBikes are short, usually about half a mile.

“You warm up pretty quickly riding a bike,” she said. “So it’s actually faster and warmer in cold weather.”

Duimstra said she thinks the program will be attractive for first-year students arriving in the fall without a bike.

“The UBike program understands that not many people may want to sign up now since it is so cold,” said Duimstra. “We are going to do a big promotional push as the weather gets warmer and there is more of an incentive to ride a bike.”

Riders can sign up for a UBike account at http://ubike.virginia.edu or by using the Social Bicycles mobile application.