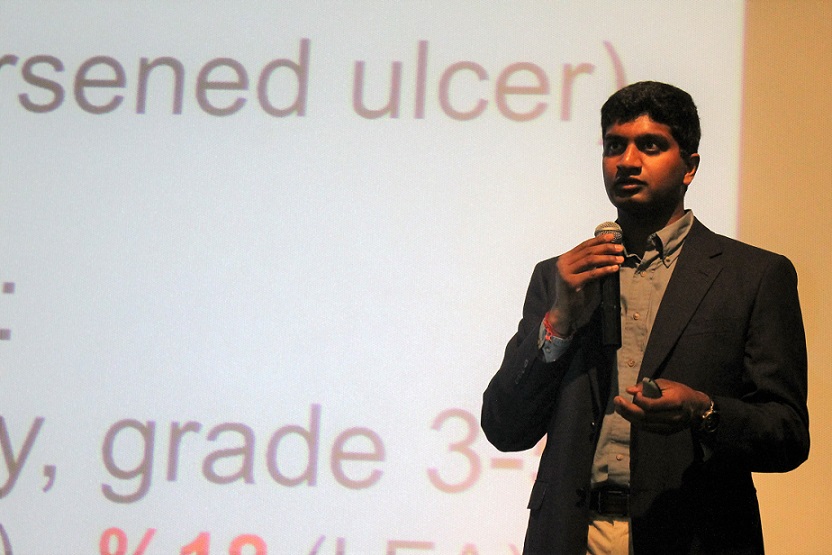 UVa fourth-year Ashwinraj Karthikeyan spoke about his healthcare startup InMedBio at SPARK: Faces of Innovation. Over 200 people attended the event at Newcomb Hall on Saturday.

University of Virginia alumni entrepreneurs returned to Grounds on Saturday to share hard-earned wisdom with students interested in starting their own businesses.

SPARK: Faces of Technology Innovation was organized by Works in Progress, a program sponsored by UVa’s Department of Engineering and Society that aims to help student entrepreneurs form teams and bring their ideas to market.

The alumni who spoke at Saturday’s event described technology entrepreneurship as an exhilarating but difficult career path, filled with financial uncertainty, cut-throat competition and self-doubt.

“This is a celebration of the entrepreneurial journey, not just the end goal or the highlights,” said Alex Zorychta, program director for Works in Progress. “If you only like the highlights, then entrepreneurship is probably not for you.”

Evan Edwards, a 2002 UVa graduate, co-founded Kaleo Pharmaceuticals, a Richmond company marketing a device to administer epinephrine injections in an allergic emergency. Kaleo’s auto-injector, called Auvi-Q, is one of just a few products that have been able to compete against the market-leading EpiPen.

Edwards and his twin brother, Eric, were both born with severe allergies to many foods and other substances. Edwards said their dissatisfaction with the EpiPen inspired them to create a more portable auto-injector that could play audio instructions for using the product.

In 2013, pharmaceutical giant Pfizer filed a lawsuit claiming that Auvi-Q had infringed on patents for the EpiPen.

“We were scared to death,” Edwards said. “The lawsuit delayed [our product launch] by a whole year … But we are much stronger as a company after going through that,” he said.

In 2015, Kaleo faced an even greater setback — a full recall of the Auvi-Q following reports of inaccurate dosage delivery.

“I had worked on this product for a third of my life,” Edwards said. “Now I had to go to my child’s school and replace his Auvi-Q with an EpiPen.”

However, Edwards said the recall motivated Kaleo to quickly develop a new product for administering naloxone injections to treat opioid overdoses, which has since saved thousands of lives.

“We are always going to learn the most from our failures,” Edwards said. “It’s OK to fall down. Just make sure you get back up.”

Edwards was visibly choked up while speaking about Mark Licata, Kaleo’s former vice president of industrialization, who died of a heart attack in 2014 at age 53.

“Mark was my mentor, and losing him was really hard,” Edwards said. “It made me realize that success isn’t really about money. It’s more about what you are going to leave behind, and how you are going to impact people.”

Edwards currently chairs the Entrepreneurial Advisory Board for UVa’s School of Engineering and Applied Science. On Saturday, he presented the board’s first Student Entrepreneur of the Year Award to Ameer Shakeel, a 2017 UVa graduate who co-founded AgroSpheres.

AgroSpheres, based in Charlottesville, is commercializing nanotechnology that can quickly remove harmful pesticide residues from crops. Shakeel and 2016 UVa graduate Payam Pourtaheri developed AgroSpheres’ technology with professor Mark Kester and patented it through the university’s Licensing and Ventures Group.

AgroSpheres won $174,000 in grants and prizes during Shakeel’s time at UVa. However, he said attracting seed funding from investors this year was more difficult than he had expected.

“The image we had built for ourselves by winning competitions as college students wasn’t working in our favor anymore,” Shakeel said. “Investors were saying: ‘These guys are at competitions all the time — when are they actually going to do the work?’”

Shakeel said the AgroSpheres team found the lead investor of its recent $750,000 funding round by traveling to Istanbul, Turkey, and leveraging the personal connections of the company’s chief nanotech engineer, Sepehr Zomorodi.

SPARK also featured presentations by the inaugural class of Pike Engineering Entrepreneurship Fellows. The teams of student entrepreneurs who were chosen for the fellowship will receive an initial $5,000 stipend and will have access to networking opportunities, mentoring and entrepreneurship workshops throughout the year.

Zorychta said the Pike Fellows program will be structured around internal and external competition, culminating in an April showcase that will have the teams compete against each other for a $50,000 prize.

The Pike Fellowship will support Shabad Sobti and Saad Khan’s venture, TexMe, which aims to bring the resources of the web to billions of people worldwide without internet access via basic cellphone communications.

To demonstrate how TexMe could work, Sobti texted the title of a Justin Bieber song to a special phone number, and received a call back that played the song.

“We believe that knowledge should not be considered a luxury,” Khan said. “You could educate entire villages just by connecting them to a phone network.”

InMedBio’s triumph at BMEidea is one of several recent victories by UVa student entrepreneurs at national pitch competitions. In 2016, AgroSpheres won first prize at the Collegiate Inventors Competition, a program administered by the National Inventors Hall of Fame in partnership with the U.S. Patent and Trademark Office.

“Over the past year, we basically have outdone any other school in these competitions,” Zorychta said. “UVa may not be winning at football, but we are winning at entrepreneurship.”