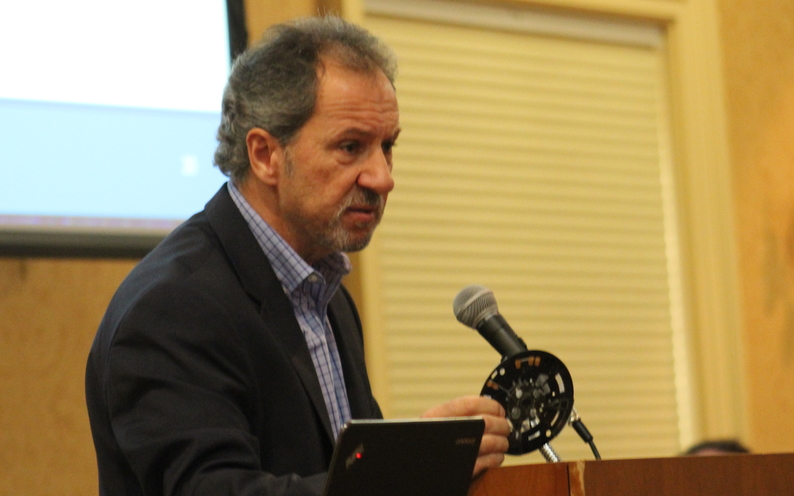 Some of the most promising technological innovations at the University of Virginia got a round of applause at Alumni Hall before the Virginia Cavaliers football team took the field Saturday.

Innovation at UVa was the subject of the latest “More Than the Score” lecture, organized by the university’s Lifetime Learning program. About 200 people attended, many wearing orange and blue in support of the Cavaliers.

Sixty-five percent of the proceeds from these inventions are directed to further research at UVa. Individual inventors keep the remaining 35 percent.

Straightiff noted that UVa’s founder, Thomas Jefferson, was a strong advocate for research-driven invention. In an 1810 letter to engineer Thomas Fulton, Jefferson wrote:

“Where a new invention is supported by well-known principles and promises to be useful, it ought to be tried.”

Backed by a multimillion-dollar investment from the U.S. Department of Defense, Landers and UVa graduate students created a small machine that can extract DNA from samples in just 10 minutes. Samples are fed into the machine on plastic discs, which Landers described as “CD-sized chemistry labs.”

“This will do everything that an entire laboratory bench of instruments will do,” said Landers, holding up one of the discs.

Landers praised UVa President Teresa A. Sullivan for supporting undergraduate research. He said 21 undergraduates have worked in his lab.

“Education shouldn’t simply be about sitting in a classroom,” Landers said.

“Darden students are hyped up on coffee with a double shot of confidence,” Breuhaus joked. “They are convinced they can take over the world.”

Breuhaus credited Straightiff with helping him to understand the real difficulty and risks of technological entrepreneurship. He said the Licensing and Ventures Group enabled PsiKick’s scientists at UVa to slowly develop their low-energy sensor technology over the course of a decade, something that would not be possible in a fast-paced corporate laboratory.

TypeZero’s artificial pancreas currently is being tested on Type 1 diabetes patients, who are born with the condition. But Rogers said it could ultimately be used to control Type 2 diabetes, which is associated with America’s obesity epidemic.

In TypeZero’s system, an electrode on a patient’s arm regularly monitors glucose levels in their blood and sends that information to a smartphone app. That app is programmed to control the patient’s insulin pump. The artificial pancreas is the product of seven years of research by scientists at UVa’s Diabetes Research Center.

“Sometimes people don’t realize how powerful these technologies [at the university] can be,” Rogers said. “Bringing them forward … is what’s so much fun for me.”