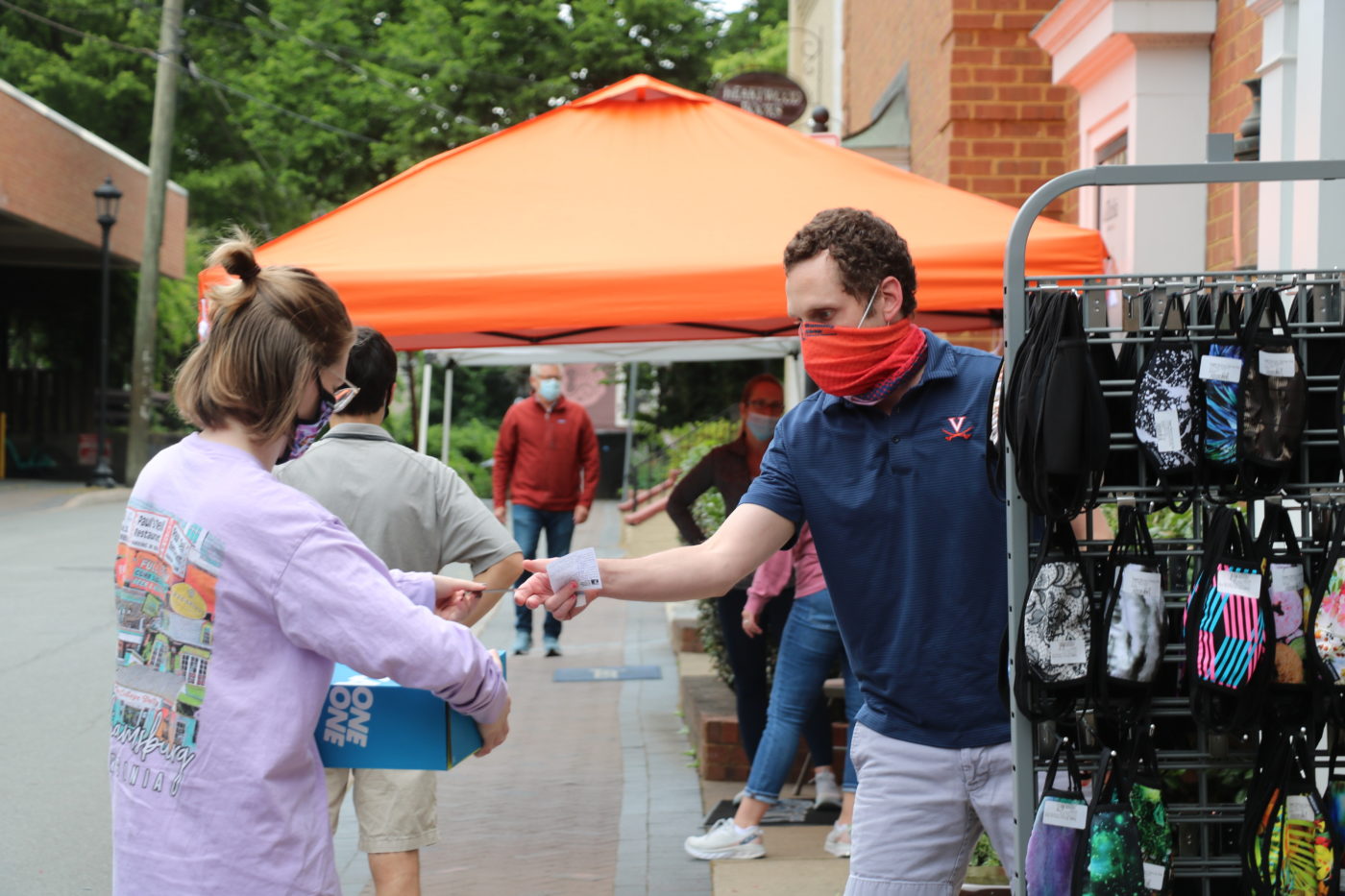 The Ragged Mountain Running Shop on The Corner has set up tents outside for customers to either pick up or try out merchandise outside. As a health safety measure, only employees are allowed inside the store.

University of Virginia rising-third year biology major Ishita Mahajan is involved with many clubs. So, as UVA announced plans to open grounds in the fall, she thought going back on campus would be ideal.

“I’m worried about my health obviously going back to Charlottesville,” Mahajan said. “There’s [also] the community of Charlottesville that lives there. UVA students have a big impact on the Charlottesville community. I don’t want to put myself at risk and all the other people who live there.”

The school’s Wednesday announcement that detailed its plan to reopen this fall mentioned large classes would be offered online, she said. But at this time, Mahajan, an international student who has been living with family in New Jersey since the pandemic outbreak, said the school has not made it clear what classes would be considered “large.”

The majority of Mahajan’s schedule includes large classes, like science courses that are around 150 to 200 students, that could be online. She said she hopes that the school will clarify that for her.

“We don’t know what’s going to happen to classes — what the cut off for how large the class can be to still meet in person,” Shah said. “I’m a science major. I’m not sure how the labs would work.”

Mahajan said she’s willing to comply with UVA’s rules, including wearing masks, social distancing and travel restrictions from and to grounds to limit the spread of the virus.

But others might not want to adhere to the rules, she said, and it’s a “little naive” that school officials are expecting college students to not throw parties and not hang out with their friends.

“If you don’t have very good measures, I feel like it’s a little unrealistic to expect that it will happen,” said Mahajan.

UVA’s fall semester protocols include teaching large classes online, giving students the option to remain home or participate in classes remotely, as well as deferring or taking a gap year.

UVA also said there it will require limited seating in dining areas, and to-go options and face coverings. Personal protective equipment will be provided as well as hand sanitizing stations across grounds.

At first, rising third-year Shah said she was all for reopening grounds, but now she wishes there was more information available to students. She said that fraternities would want to congregate in large groups, and she’s not sure how the school could prevent that.

Business owners on The Corner — like Johnny Garver, owner and chef at Pronto, and Audrey Lorenzoni, the co-owner of Ragged Mountain Running Shop — have voiced concerns about UVA’s plans to reopen. They said they witnessed students not wearing masks.

Whenever there’s a large group of people coming to an area, there’s a risk that COVID-19 could run rampant in the community, said Dr. Taison Bell, an assistant professor of medicine in the divisions of infectious diseases and international health and pulmonary and critical care medicine at UVA.

He acknowledged COVID-19 is active, saying that states like Florida and Texas have seen an increase in cases.

“But it does not mean that we have to go back to shutting down the whole country,” he said. “Being able to [reopen] in a smart way is what’s important.”

UVA’s plan is reasonable, he said, because of its flexibility that allows classes to be moved online in case there’s a second wave. That would prevent the disruption of learning.

“Because we have that set up now, we’ll have either online or in-person classes,” he said. “Students can take classes online if they want to and there’s flexibility in the plan. That’s what’s going to be the best thing moving forward.”

As Virginia entered its reopening phases, many have voiced concerns about a spike in COVID-19 cases, specifically because the virus has disproportionately affected underserved communities.

Bell said as part of the reopening plan issued by Gov. Ralph Northam, hospitals in Virginia are required to maintain a 25 percent capacity to deal with the surge, including the hospital having enough personal protection equipment and staff to take care of patients.

“We’re pretty confident that we’ll be able to handle a surge because of how we structure —  how the hospital runs,” he said, explaining that as long as people stick to precautionary measures, “we can do things like reopening businesses and having gatherings.”