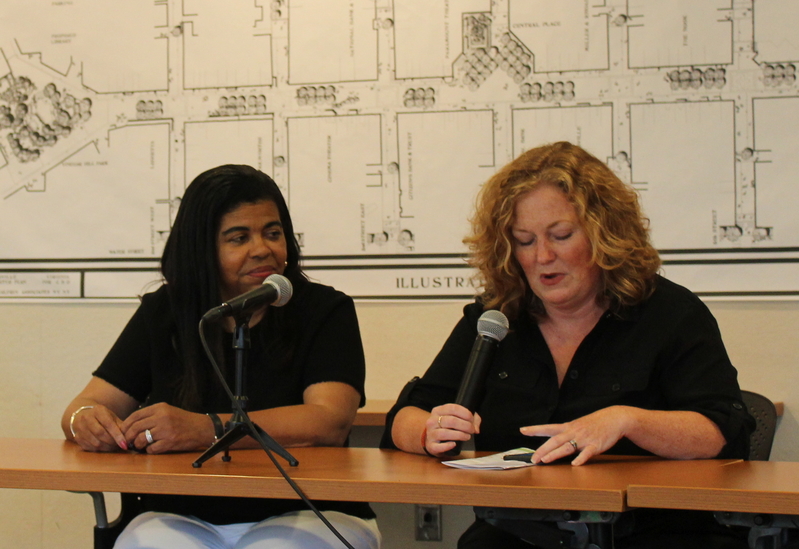 Vinegar Hill was once the site of a predominantly African-American residential neighborhood and business district. Charlottesville residents voted to raze most of the neighborhood in the early 1960s in the name of urban renewal. At the time, poll taxes prevented many residents of Vinegar Hill from voting.

At a meeting Thursday, four representatives of the Historic Resources Committee presented a two-phase plan to establish a park between the Main Street Arena and the Omni Charlottesville Hotel that would commemorate Vinegar Hill’s past.

“Everyone has been in agreement that the small granite marker [currently on the site] is completely insufficient,” said HRC co-chair Melanie Miller.

The city’s Blue Ribbon Commission on Race, Memorials and Public Spaces observed the HRC’s presentation before holding its own meeting.

HRC co-chair Edwina St. Rose said that her idea for the park was inspired by a 19th-century newspaper article about a park in the old Vinegar Hill neighborhood.

The first phase of the plan consists of adding new signs to designate the area as Vinegar Hill Park, along with four historical markers that will tell the story of the former neighborhood.

Mary Joy Scala, preservation and design planner for Charlottesville, said that the wayfinding signage would match the green Downtown Mall sign that is currently in that space.

The HRC plan calls for that sign to be attached to a light pole and for six planters to be relocated to make room for the historic markers.

Miller said that the signage would require an appropriation of $5,000 to $10,000 from the city. She said that the HRC could devote its entire annual budget to building the historical markers.

Miller said that the first phase of the HRC’s plan would be an “easy and palatable” first step for the park. “We want to make it inexpensive enough to make it doable,” she said.

St. Rose said that she would like the park to include a mural. The HRC’s site plan identifies a potential location for a mural next to the Main Street Arena.

The HRC will continue to seek public input for the second phase of the plan. With a larger investment from the city, “[the park] could be … something much grander,” Miller said.

The HRC members were seated in front of a large print of Lawrence Halprin’s original plan for the Downtown Mall, which reserved green space for Vinegar Hill Park at the current site of the Omni.

Margaret O’Bryant, a member of the HRC and the Blue Ribbon Commission, said that expanding Vinegar Hill Park would make the Downtown Mall more faithful to Halprin’s original concept.

Miller said that the markers and signage from the first phase of the plan would be preserved in the second phase. “We don’t want to throw the city’s money away,” she said.

In the public comment period, Charlottesville resident Henry McHenry questioned the value of the added signage.

“How will that affect, impact and change the way we live around here,” McHenry asked.

St. Rose responded that the signs would at least “help to tell the story” of Vinegar Hill.

McHenry suggested using old boards and rubble from the demolished buildings of Vinegar Hill to create a monument, if any were still in existence.

The HRC’s plans did not specify where the proposed Vinegar Hill monument, designed by sculptor Melvin Edwards, would be located. The city is still working to raise money for the monument.

At their meeting Thursday, several members of the Blue Ribbon Commission expressed support for the HRC’s plan. Sue Lewis said she was “very impressed” by the presentation. John Edwin Mason also said he favored adding the new signage to Vinegar Hill.

“The Blue Ribbon Commission is pleased and grateful that the Historic Resources Committee is this far along [in its work],” said O’Bryant.

Miller said that the HRC’s next step is to present the plans for Vinegar Hill Park to the Charlottesville City Council. 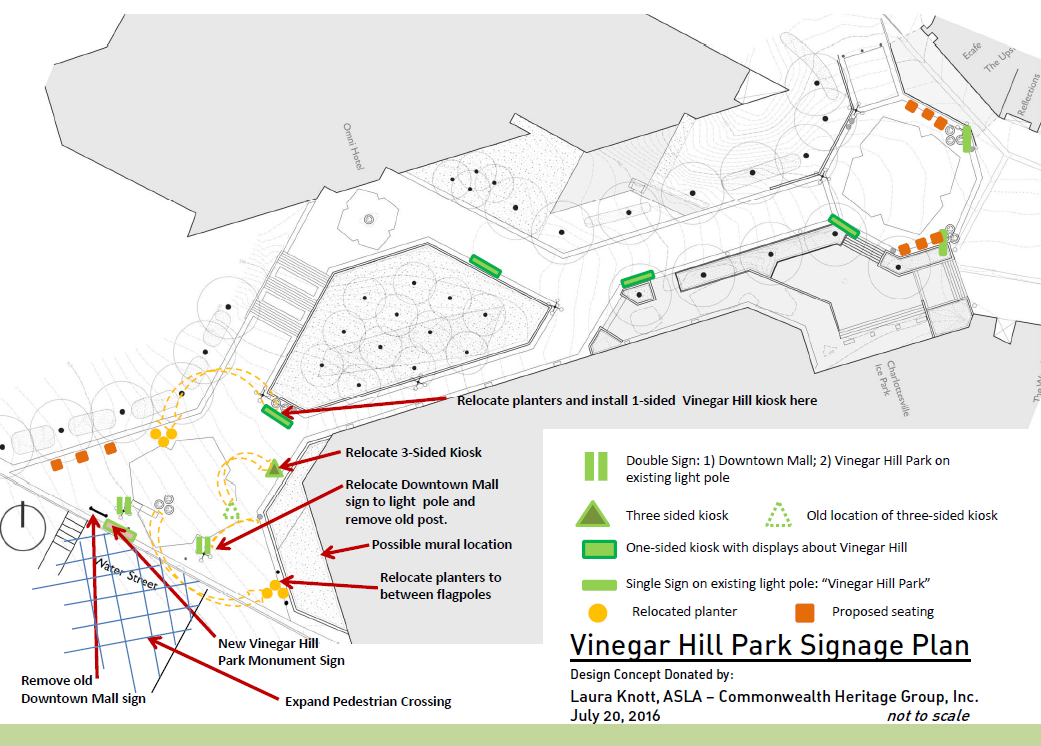