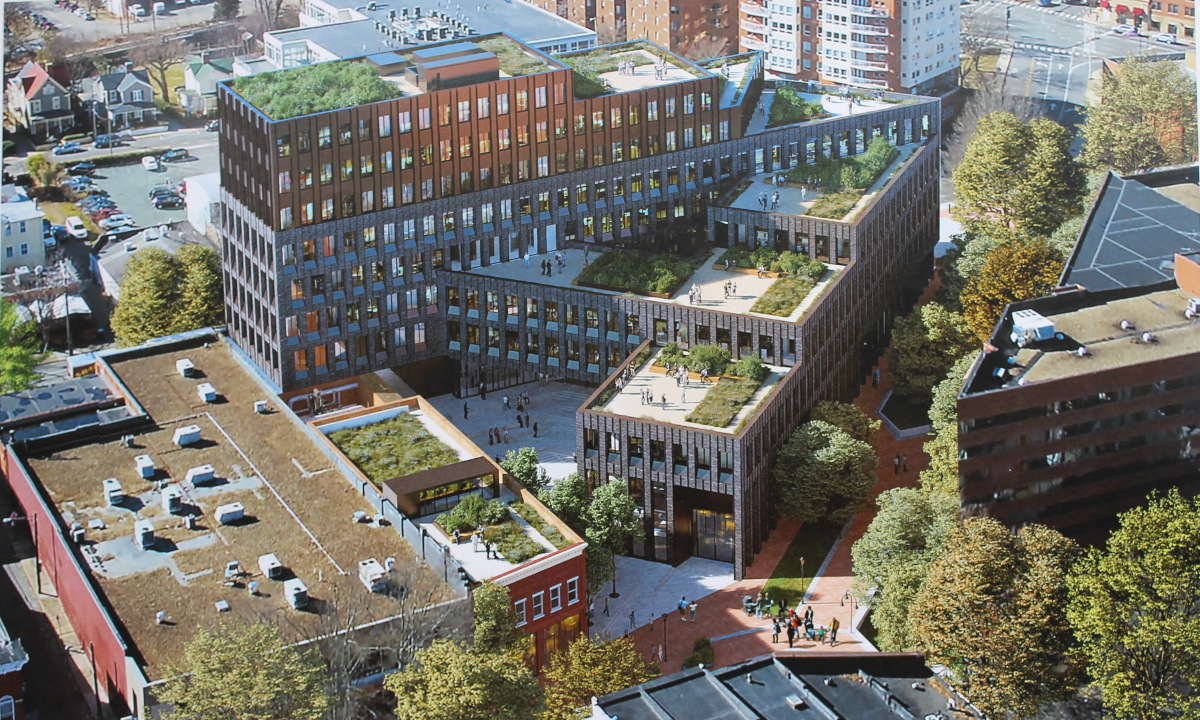 Construction of the Center of Developing Entrepreneurs presents an opportunity to rethink Vinegar Hill Park.

Construction will begin this summer to replace the Main Street Arena in downtown Charlottesville with the technology-focused Center of Developing Entrepreneurs. Some stakeholders hope to use the spotlight on CODE to put plans for the adjacent Vinegar Hill Park in motion.

In late 2016, the City Council set aside $15,000 to create Vinegar Hill Park at the western end of the Downtown Mall between the arena and the Omni Charlottesville Hotel. The original proposal was to erect a sign with a paragraph on the history, but the plans are starting to look much larger than a plaque.

“It’s just a thoroughfare now and [CODE’s construction] gives us this great opportunity to make it more,” said Melanie Miller, chairwoman of the city’s Board of Architectural Review.

Vinegar Hill was the center of African-American commercial life in Charlottesville until 1965, when it was bulldozed as part of the city’s urban renewal program. The neighborhood stretched from the future CODE building to the Jefferson School, one of the only original buildings still standing in the area.

Given the history of Vinegar Hill, community engagement will be a priority, city officials said.

“This has to include the African-American community — hugely. They’re going to be at the table from the beginning to the end, from the crafting of the engagement process itself to the meetings that we’ll have to jointly design the park,” said Councilor Kathy Galvin.

The council has many local examples of community engagement that could serve as models.

“The era of the monoliths that don’t dialogue with the community is coming to an end,” said artist Eto Otitigbe at a recent Tom Tom Founders Festival panel, “Honoring Black America in the Public Realm.”

Otitigbe is working with architecture firm Höweler+Yoon on the Memorial to Enslaved Laborers at the University of Virginia. Since being awarded the project in 2016, the Boston-based firm has focused on gathering public input through open forums, online polls and group meetings, such as discussions Otitigbe has held with descendants of the slaves who built UVa.

“My job is really just listening — listening to stories, listening to experiences, listening to reflections, and trying to develop a vernacular that’s specific to Charlottesville that can be used to inform the design that will go on the exterior of the memorial,” Otitigbe said.

One idea is to carve the exterior of the memorial with scar-like marks, to represent the strength of the enslaved.

Since the city’s $15,000 contribution will only cover signage, finding financial support for Vinegar Hill Park will be a crucial step in its development.

Last week, Galvin helped to organize a conversation between key stakeholders, including representatives from the Historic Resources Committee, the BAR, CODE and the Omni.

“I didn’t know how this was going to go, and it went really well,” Galvin said.

At the meeting, CODE’s architects and landscape architects offered to work on the design pro bono.

“They will mainly be listening, and then they’ll be drawing. And we’re getting it as a gift,” Galvin said.

The developers of CODE said they value public space because they hope to create a collaborative environment for Charlottesville’s growing tech economy. Much thought has gone into the design of lobbies, rooftop terraces and other shared spaces that will foster collaboration between the tenants.

“You have this very generous lobby area of about 3,000 square feet where people can sit. We’ll have a coffee bar,” said Andrew Boninti, who is working on the project for CSH Development. “It might serve beer, as well — we’re working on that. If you want to get to your office space, here’s how you have to go.”

The lobby will be open to the public, as will an outdoor plaza on CODE property that will connect the Downtown Mall to Water Street.

“I think there will be outdoor public events here,” Boninti said. “You’ll see people sitting around for lunch. I think it’s going to be a fun meeting place for people in the building, as well as visitors, as well as people on the mall.”

The BAR approved the project on March 20 and reviewed additional demolition plans on Tuesday. Public discussion of Vinegar Hill Park is tentatively planned for a City Council meeting in June.