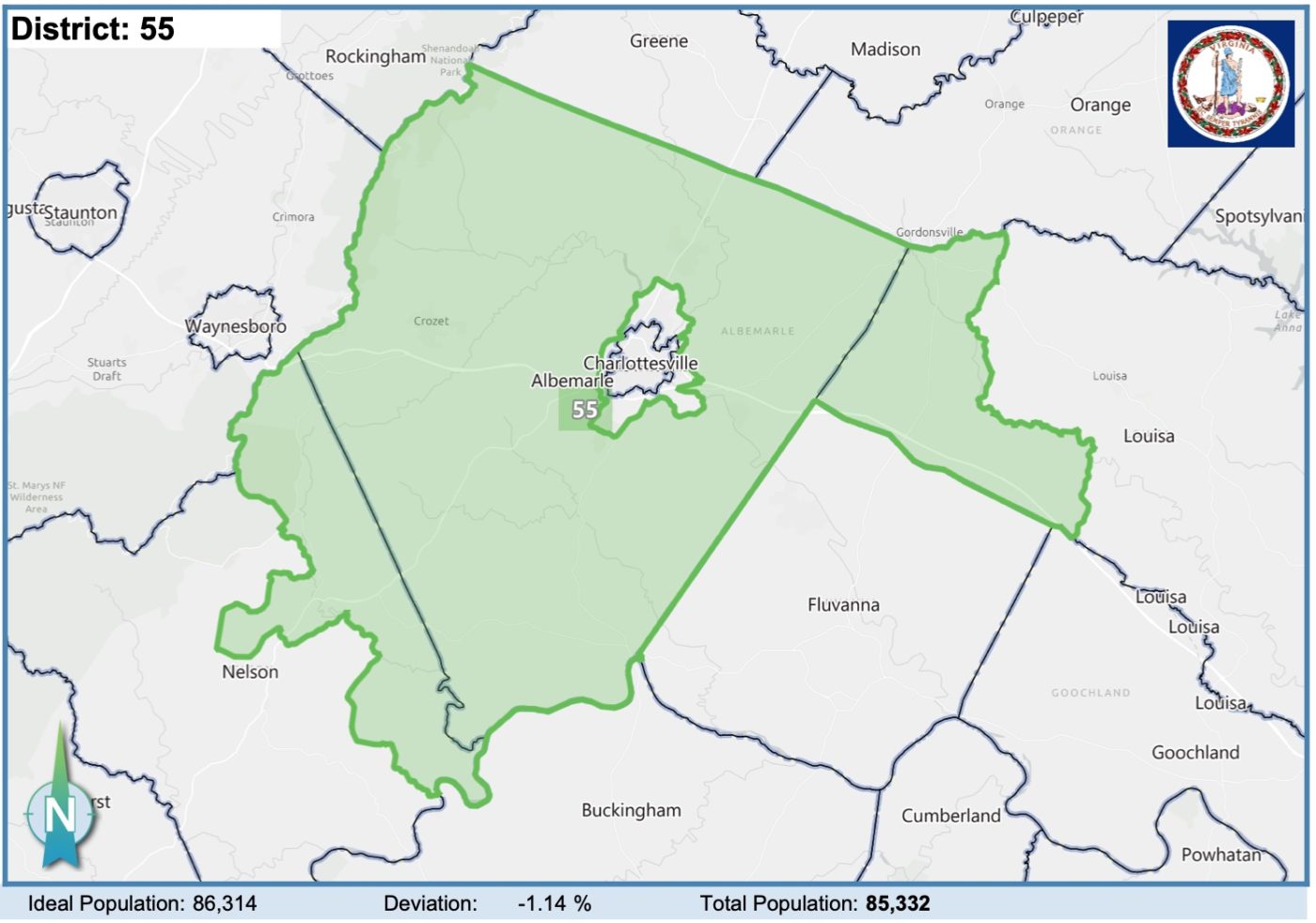 Charlottesville and Albemarle County are now encompassed in the 54th and 55th House of Delegates Districts in the new maps approved by the Virginia Supreme Court.

Despite a complicated process to redraw state and Congressional District maps tiring both political parties and everyone in between, new House of Delegates maps may please some area Democrats.

Now, not only will Charlottesville and Albemarle County have fewer House of Delegate districts to keep track of, the two they now vote in exclusively comprise the Democrat-leaning area. Previously, four different districts that sprawled further into rural and Republican areas slightly touched Albemarle or Charlottesville. Some say that minimized Democratic votes from this region.

“The blue island” of Charlottesville and Albemarle was “split in such a way that it elects just one Democrat to the state House,” said Kyle Kondik, managing editor of Sabato’s Crystal Ball, a University of Virginia publication that analyzes politics.

He surmises that due to the new maps, the area could now elect two Democrats into the state’s legislative body.

“The way it was before was so gerrymandered,” said Donna Price, who serves as Chair of Albemarle’s Board of Supervisors. “Albemarle was divided into four House of Delegates districts. That was a deliberate act to dilute the power of an intact community.”

The local chair of Albemarle’s Democratic Party, Amy Laufer, too, said that the old maps felt very intentional in “diluting the votes of Albemarle County.”

Legislators used to draw the maps themselves — which some say created politically or racially gerrymandered maps. For the last two decades, legislators and activists alike have tried to take that power away from legislators.

In 2020, Virginians voted to create a bipartisan redistricting commission tasked for the job. It failed to agree on new maps, so the Virginia Supreme Court had to step in and draw them.

Regardless of who is drawing them, district maps are redone every decade as U.S. Census data is collected.

These new maps will shape the next decade of Virginian representation at the state and federal levels. 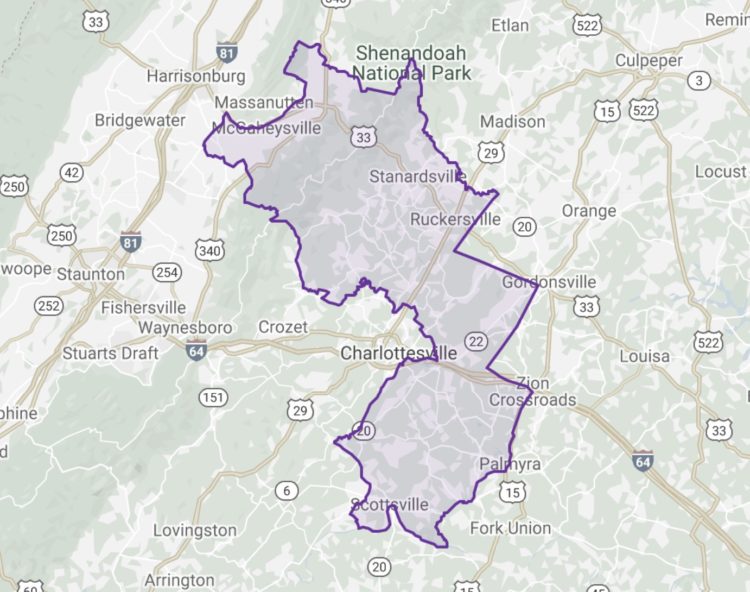 Prior to the new maps, the district that Del. Rob Bell represented was the 58th House District. It included portions of Albemarle, Fluvanna, Greene and Rockingham Counties.

The old maps had several House of Delegates districts touching Charlottesville and Albemarle, but only one truly represented this area. Instead, many of them sprawled more widely and further into Republican-leaning localities. Now, fewer districts touch this area, but more broadly encompass it.

Rather than being portioned off into the 57th, 58th, 59th and 25th districts, Charlottesville and Albemarle now fall into the 54th and 55th. Incumbent Del. Sally Hudson’s former 57th is now the 54th. Meanwhile what once was spread among several others is the 55th District — and its future contenders are yet to be revealed.

“Last time, we had one district in the city,” said Hamilton Lombard, a University of Virginia demographer. “The one in the northside of town kind of did and then you had two below us going from Charlottesville down to Lynchburg, and one from western Grounds to the West Virginia border. Now what you have is very logical.”

County Registrar Jake Washburne said that the new maps may be favorable to the Democrat-leaning area.

“It’s got some political repercussions, too, because if you look at how Albemarle has voted in recent elections, it’s leaned pretty heavily democratic,” Washburne said. “From my back porch, it’s unlikely Republicans will be able to win that district.”

For instance, Del. Rob Bell is a Republican who has represented the former 58th District since 2002. The district used to wrap around eastern portions of Albemarle before stretching towards Harrisonburg.

Charlottesville Tomorrow reached out to Bell to inquire where he plans to run next but has not heard a response at the time of this publication.

Bell’s most recent Democratic challenger, Sara Ratcliff, has already announced her intention to run in what is now the nearby 62nd District — which neighbors Albemarle’s eastern border, but spreads towards Culpeper. 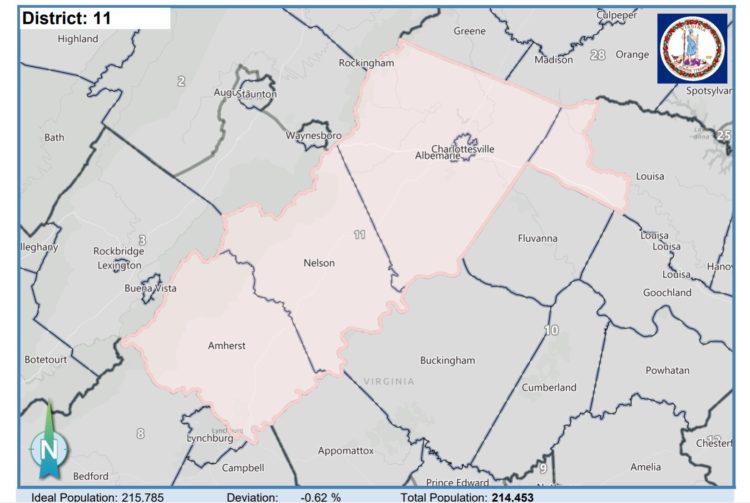 Sen. Creigh Deeds plans to seek election in the new 11th Senate District. It includes all of Charlottesville, Albemarle, Nelson and Amherst along with a portion of Louisa County.

The Senate districts were adjusted as well.

Sen. Creigh Deeds has represented the 25th Senate District since 2001, but has lived some 90 miles away, near the West Virginia border. That former district looked somewhat like a standard puzzle piece. It touched Charlottesville on its wide easternmost side, then shrunk into a narrow bridge (conveniently darting around Staunton) until connecting to another wider piece on the western side of the state. 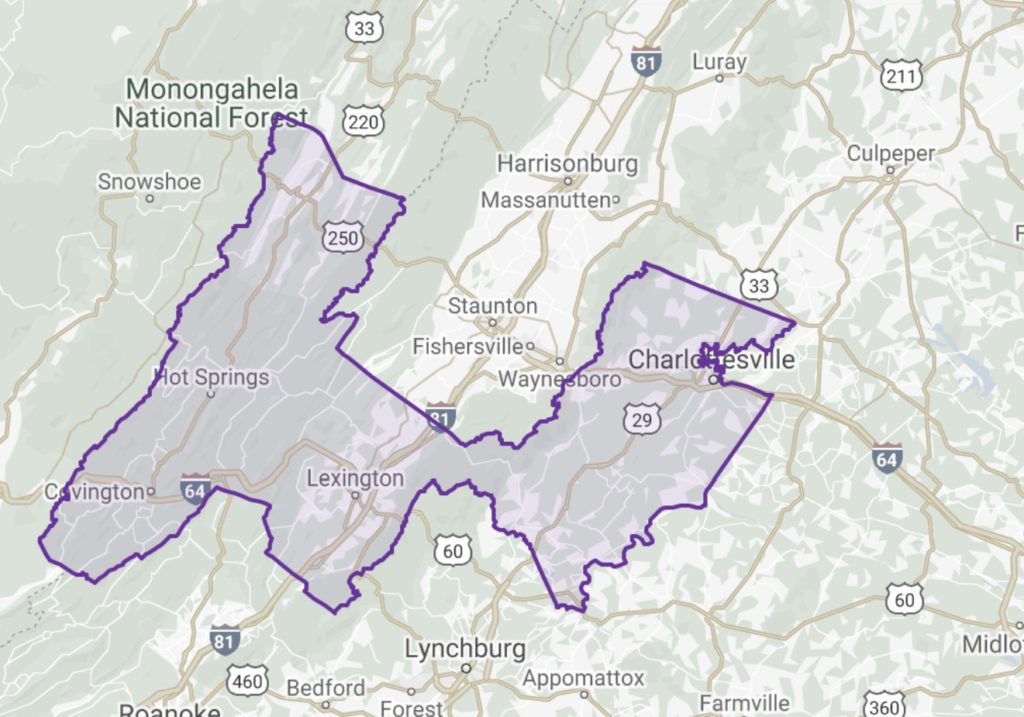 Prior to the new maps, the district Sen. Creigh Deeds represented included Charlottesville, but stretched to the West Virginia border,

“I’ve been in Creigh Deeds district all my life,” Lombard said. “I grew up in Bath County and then when I moved 90 miles [to Charlottesville], I was still in his district.”

Since Deeds’ no longer lives in the same district as Charlottesville, he announced that he is planning to move here before running again in the new senate district that represents this area — the 11th.

He is “looking at some places right now” and intends to move sometime in the coming months, Deeds said. He will retain his senate office in Charlottesville, but his law offices will remain in Bath County.

As the region familiarizes itself with new legislative boundaries, candidates and voters may have to prepare themselves for an additional election this year.

Paul Goldman, a former chair of Virginia’s Democratic Party, is trying to force the state to redo last year’s House of Delegate elections. Though the terms for Virginia’s 100 delegates started this January, they were each elected last fall on maps from the previous decade — not the new maps that take effect this year.

Goldman sued the State Board of Election in federal court in July. If another election is required this year, the months ahead will bring announcements from contenders for the 55th District. But there are none yet.

“I think people are waiting to see the result of the lawsuit to determine when the election will be held,” local Democratic Party Chair Laufer said. “I also believe that everyone is focused on the current session to be able to advocate or oppose legislation.”

The current legislative session is happening as Republicans have gained control of the House and the state’s executive branch.

Meanwhile, announcements have been trickling out from challengers to the member of Congress that still represents Charlottesville and Albemarle — U.S. Representative Bob Good.

While both localities still fall within the 5th Congressional District — from which Good was elected — its shape has become more compact.

Previously the map stretched from the North Carolina border toward the Maryland border. Now, it still stretches from North Carolina, but Charlottesville and Albemarle are at its top.

Lombard said that, like before, the two localities  may continue to stand out from the rest of the district as they have leaned more democratic, despite the overall district leaning Republican.

“Charlottesville is still the one area of that district that will stick out,” Lombard said. “It has tended to not vote like much of the rest of the region.”

One troubling component for Albemarle County, however, is the fact that a small sliver of it now resides in the 7th Congressional District. 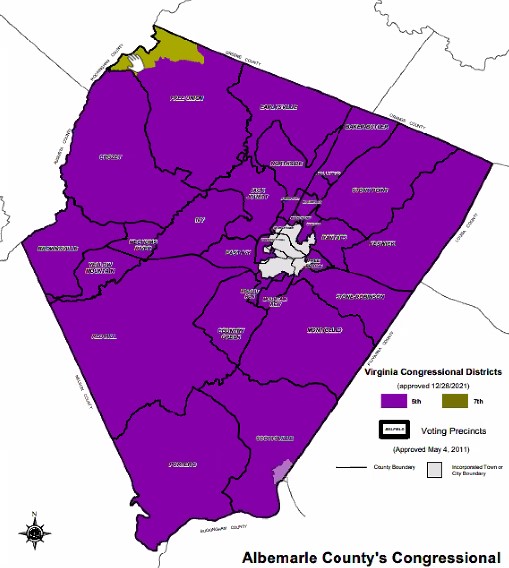 A hand cursor hovers over the "small sliver" of Albemarle that now falls in the 7th Congressional District during a Jan. 24 presentation by the county's Registrar and an attorney.

“The most puzzling thing of all is a little tiny sliver in northern Albemarle that’s in the 7th District,” Washburne said. “It’s mostly Shenandoah National Park. It’s Smokey Bear.”

According to the new Census data, the “sliver” — which has a joke Twitter account — has a population of about 110 people, and Washburne says only about 60 of them are registered voters.

It irks Price as well.

“How in the heck could this tiny little sliver affect the overall redistricting in the Commonwealth?” she mused.

Given that a portion of the county is in a different Congressional district, the county may need to adjust polling precincts.

To contend with the hiccup, Washburne said that the county must request a waiver from the Virginia Board of Elections grant so the county can administer a split precinct for the Congressional elections.

While he doesn’t think it will be too much trouble, he explained that it will be added work for election workers.

“I don’t anticipate that that will present problems,” Washburne said. “But it is always a challenge to administer a split precinct to be sure to get the correct ballot to the correct voter.”