VMDO has the contract to design a reconfigured Buford and Walker. But why are the schools like that in the first place? 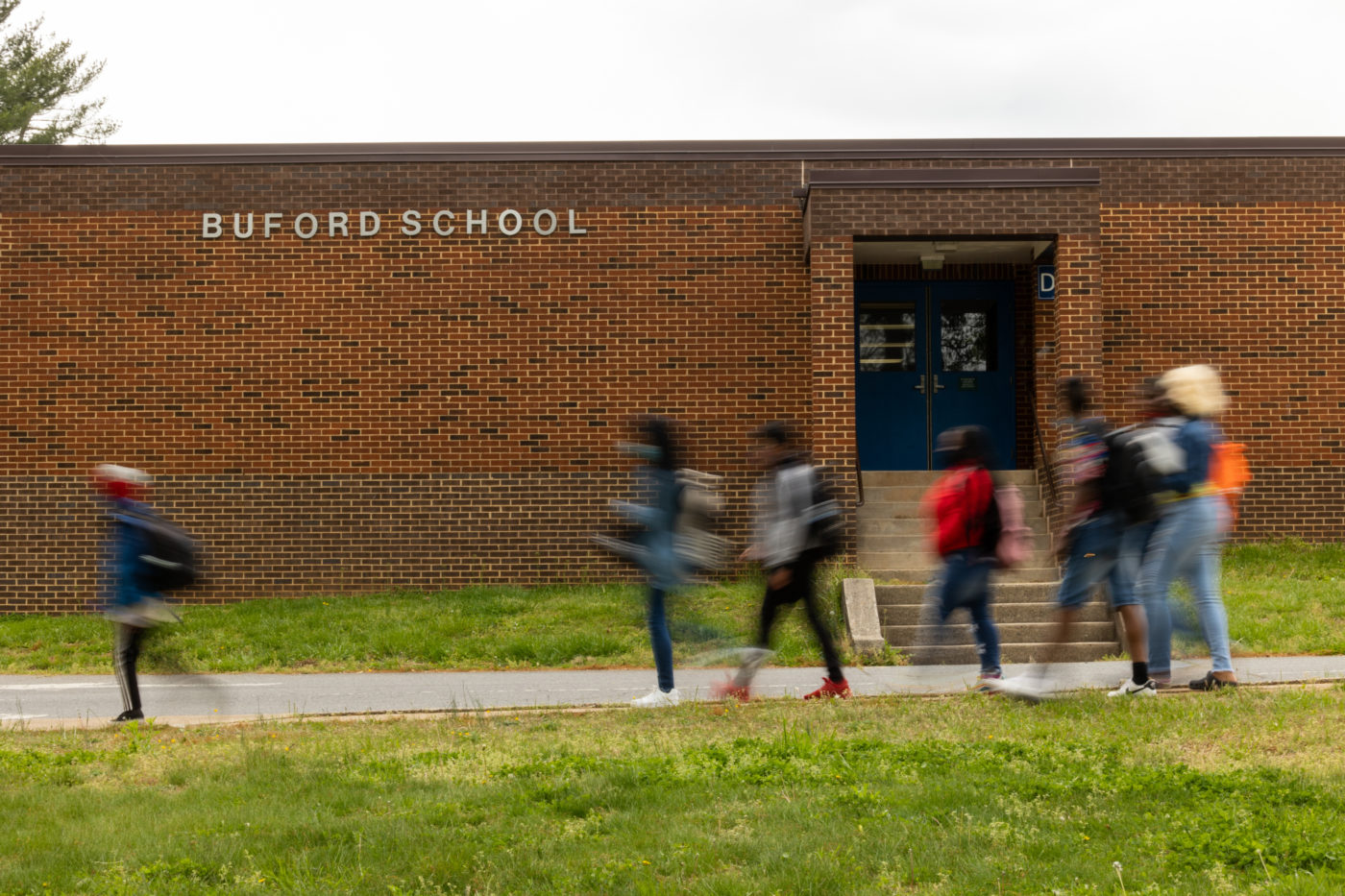 The Charlottesville City Council awarded VMDO Architects the $1.47 million contract for the design phase of Buford Middle School and Walker Upper Elementary’s reconfiguration in March. It’s a move that begins the process of undoing the first reconfiguration of Buford and Walker in 1988.

The coming months involve planning, public outreach and design resulting in three conceptual designs for Walker and Buford’s campuses. Wyck Knox, a VMDO architect, said the firm intends to provide the city with an initial presentation of the project in June, and schematic design packages are set to be delivered in January.

Under the proposed reconfiguration, Buford will house sixth through eighth grade, and Walker will serve as a centralized preschool.

If the City Council approves plans and provides funds for construction, VMDO will begin the design development phase with the goal of completing construction bid documents by September 2022, according to VMDO’s proposal.

“This is not a traditional architecture project — in the sense that there’s been a well-defined scope and budget and schedule, and an architect’s been hired and said, ‘Go do it go make it happen.’” Knox said. “Instead, this is really more of a programming and problem-seeking exercise where we’re trying to look at what all the different options might be and what they might cost.”

But how did the schools come into their unique configuration in the first place?

Buford and Walker weren’t built with the intention of an upper elementary/middle school split. In 1966 — as overt massive resistance to school desegregation had all but faded across Virginia — they opened as individual junior high schools serving seventh- through ninth-grade students.

Faced with increasing enrollment in elementary and high schools, the City Council authorized the construction of Buford and Walker — the city’s first junior high schools — in 1963. The School Board’s request for authorization asserted that the junior high model would represent “the most educationally sound form of school organization for this city.”

But just over a decade after the schools’ grand opening, community perception evolved to view Buford as inferior to Walker.

A 1979 article from The Daily Progress asks how the two schools — both built at the same time, receiving proportional funding and with comparable staffing and supplies — had come to be seen as “vastly unequal in educational quality and prestige.” 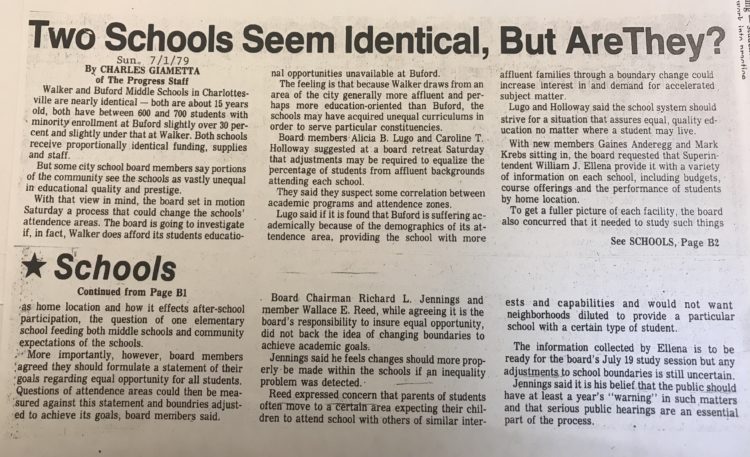 A 1979 article from the Daily Progress.

“The feeling is that because Walker draws from an area of the city more affluent and perhaps more education-oriented than Buford, the schools may have acquired unequal curriculums in order to serve particular constituencies,” the article reads.

Main Street was the “dividing line” between the two schools, said James Bryant, who attended Walker Middle School as a student before teaching there as a choral music teacher.

Bryant recalls only one public housing area located to the north of Main Street — and thereby zoned to Walker Middle School. South of Main Street; students living in Garrett Square (now known as Friendship Court), along Prospect Avenue and in other subsidized housing attended Buford.

“Most of the students who attended Walker — even when I was teaching there in the 80s — were your [University of Virginia] professors’ children.”

The dual middle school model created a de facto system of racial segregation between Buford and Walker — whereby Walker was predominantly white and Buford predominantly Black — said Vincent Cibbarelli, who served as CCS superintendent at the time of their reconfiguration.

“They all had a gift, and they all had something to offer, but there was an imbalance,” Cibbarelli said.

Charlottesville School Board member Leah Puryear noted that the schools were divided down class lines, too.

A 1987 speech from Priscilla Whiting, then president of the Charlottesville NAACP, advocated for the pairing of Buford and Walker as they are today. She likened the perceived difference between the two schools to the 1954 Brown v. Board of Education decision whereby Chief Justice Earl Warren stated that “separate educational facilities are inherently unequal.” 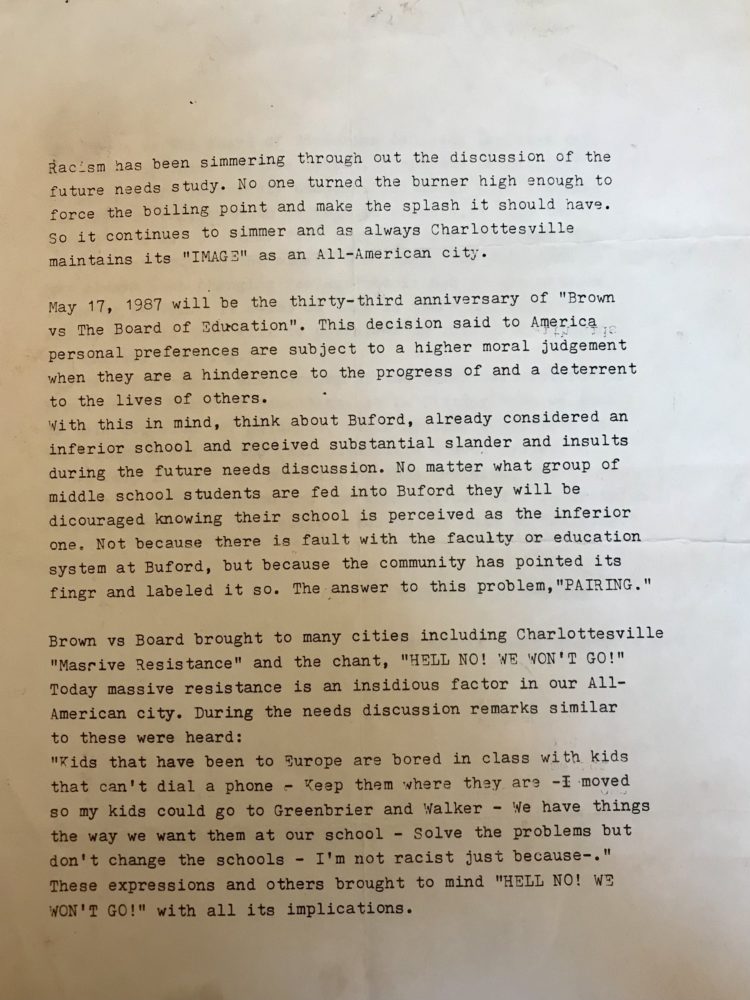 An excerpt of a 1987 speech from then-president of the Charlottesville NAACP, Priscilla Whiting.

“No matter what group of middle school students are fed into Buford, they will be discouraged knowing their school is perceived as the inferior one,” the speech reads. “Not because there is fault with the faculty or education system at Buford, but because the community has pointed its finger and labeled it so.”

The arguments from community members opposed to pairing Buford and Walker echoed the “Hell no! We won’t go!” refrain of the Massive Resistance, Whiting wrote.

Debate around Buford and Walker eventually prompted the school division to form its Future Studies Needs committee, charging members with determining the solution to inequity between the two schools. Leah Puryear’s late husband, Dr. Paul L. Puryear, was among the community members who served on the committee.

After community engagement, and ample controversy, the committee recommended — with the endorsement of Cibbarelli — that the school division reconfigure Walker and Buford into their present upper elementary/middle school model.

“Dr. Cibbarelli really felt that the only way to develop parity — without redistricting the elementary schools — was to come up with pairing, which meant that all children for fifth and sixth grades went to Walker and all middle school children, seventh and eighth grade, would go to Buford,” Puryear said.

The recommendation passed with a $1.26 million appropriation from City Council, and in 1988, the two schools opened as Walker Upper Elementary and Buford Middle School. All Charlottesville students — regardless of their neighborhood — attended the schools with one another. 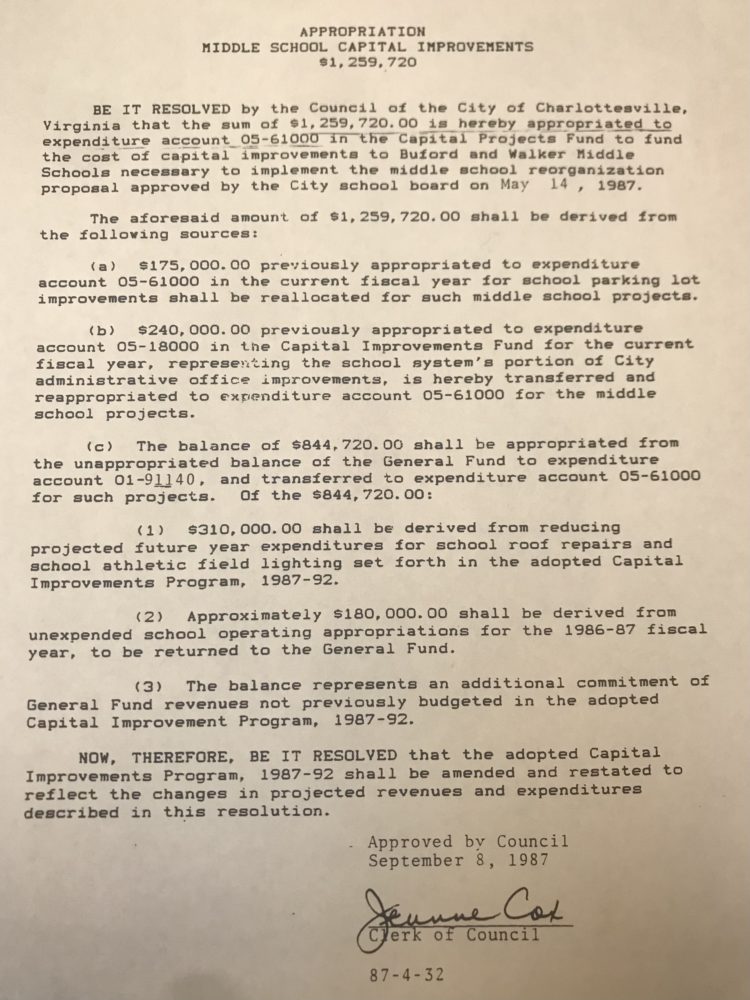 The appropriation resolution to fund the cost of capital improvements to Buford and Walker schools.

Still, pairing the two schools brought challenges from the outset.

With the increased enrollment at Walker, Bryant’s choral music class was relocated to a small windowless room. Black students were still tracked into lower courses than their white counterparts.

And white parents pulled their children out of the CCS middle schools in favor of the city’s private schools, Puryear said.

“The white parents did not want their children going to Buford because they felt if their children went to Buford, they would be receiving a lesser education,” Puryear said.

Yet the configuration persisted for nearly 20 years until, when rising dropout rates at Charlottesville High School led school officials in 2007 to explore other middle school options. The upper elementary and middle school model meant that CCS students went through several transitions by the time they reached high school — which, Puryear said, is not “academically sound.”

Awaiting that promised reconfiguration for a decade, Walker and Buford are in need of repairs and renovations.

Although the grand opening of a reconfigured Buford and Walker may still be years out, Puryear is “cautiously optimistic” that the City Council will provide additional funding for a contractor to bring VMDO’s designs to life.

“And Charlottesville City Schools will once again be elementary, middle and high school, and all of our preschool children will be able to be in the preschool environment at Walker,” Puryear said.