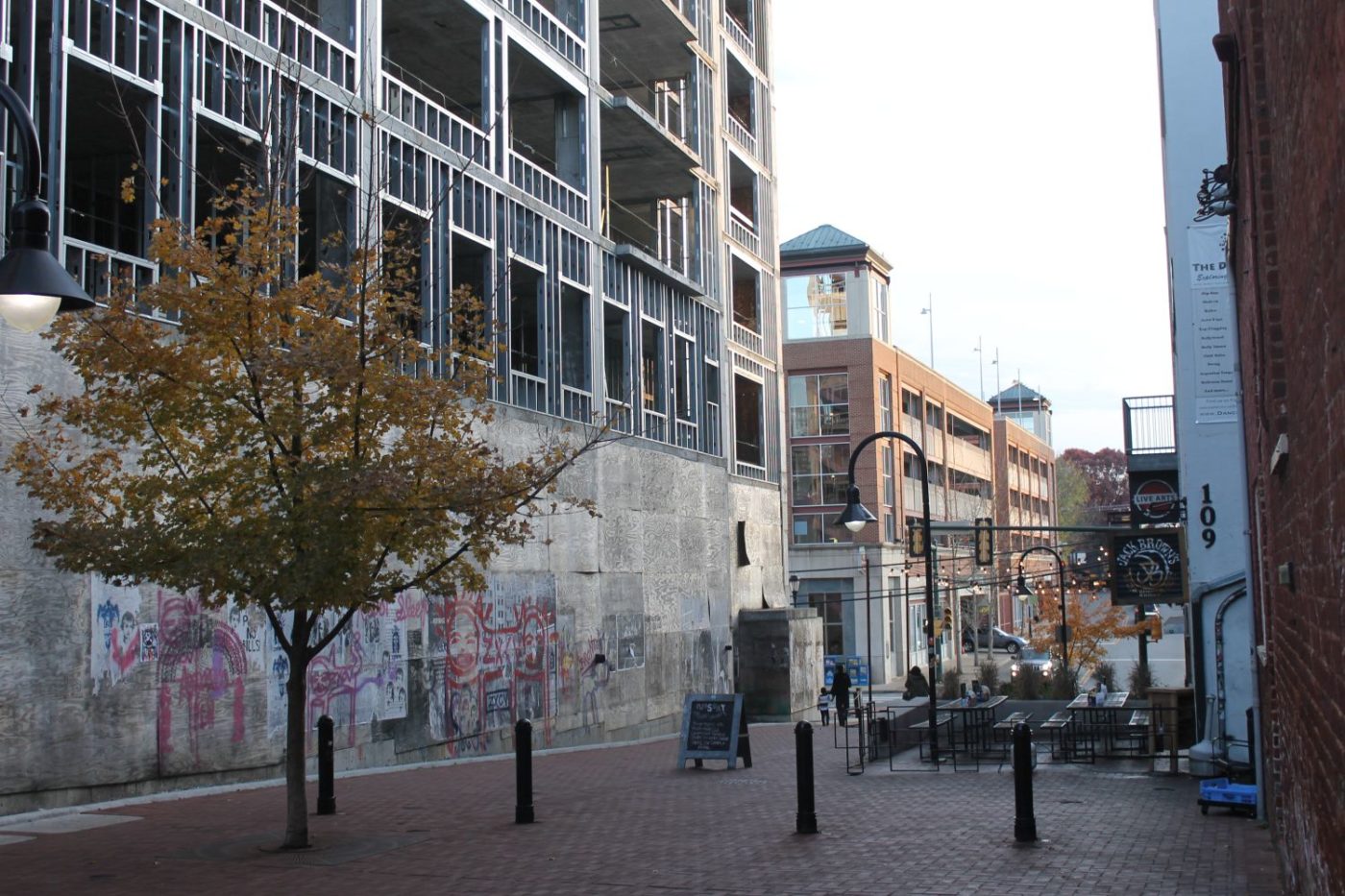 Charlottesville will enter into a 40-year lease to rent 75 spaces at the Water Street Parking Garage. The spaces would be reserved at a discounted rate for a future hotel planned for the shell of the unfinished Landmark Hotel on the Downtown Mall.

City Council voted to make the move on a 3-2 vote Monday.

“The parking spaces are needed in order to make the financing work for this project,” said City Manager Maurice Jones.

Work on the Landmark Hotel stopped in January 2009 and Atlanta-based Dewberry Capital purchased the property at auction in June 2012 for $6.25 million. In March of this year, Council voted 4-1 on a tax incentive plan that would grant developer John Dewberry $1 million in tax breaks over a 10-year period if the hotel is opened by July 1, 2020.

In June, the Board of Architectural Review had a preliminary look at a new plan for the hotel, which would add a 10th floor as well as additional stories over the façade facing the Downtown Mall. The BAR will need to approve the new design before the project can move forward.

Council has also been asked to provide parking in the Water Street garage. The Landmark Hotel itself has no spaces in its structure because it is part of a zone that exempts developers from having to build parking.

City Attorney Craig Brown said the previous developer, Halsey Minor, had entered into a lease for 70 spaces at the Water Street Parking Garage. That deal expired after the hotel’s construction stalled in 2009.

To comply with Virginia law, city officials issued a request for proposals for an entity to lease the spaces for a period of 40 years. This same process was also used when the city leased space at Buford Middle School for the Boys and Girls club and again for the Brooks Family YMCA at McIntire Park.

“There is a rent structure that goes for 40 years, the maximum we can lease property under state law,” Brown said. “The term of the lease will begin sometime between April 1, 2019 and September 1, 2020.”

Deerfield Square Associates II, a limited liability corporation affiliated with Dewberry, was the sole respondent. Council approved a first reading and public hearing on the lease on Nov. 6 at which two members of the public spoke. Neither expressed opposition to the proposal itself.

City Councilor Kathy Galvin asked how much of a discount that would represent over the existing rate of $120 a month. Neither Brown nor Jones were able to provide that number at the time of the discussion.

Under the lease, the monthly rate for each space for the first year works out to $44.44, or a nearly 63 percent decrease from the current rate of $120 a month. Further, the spaces would be for the exclusive use of the hotel and lessen the inventory of parking available to transient customers at market rates.

The issue also is clouded by potential legal issues.

The city and the Charlottesville Parking Center are currently in mediation for a lawsuit filed against the city by CPC in March 2016. The suit alleges the city has kept monthly prices in the garage below market value. The city countersued alleging that CPC unlawfully purchased spaces in the garage that had belonged to Wells Fargo.

Officials with CPC declined to comment for this story.

Jones said if the lease of the spaces is delayed, there would be a “domino effect” on the rest of the negotiations.

“One of the attractive aspects of the negotiations from the City Council’s standpoint is that we wanted it done by a certain time or the incentives would go away,” Jones said.

Mayor Mike Signer asked why the idea of discounted parking was even on the table.

“How did we come to the point where we determined, both staff and council, that something like negotiating discounted parking rates should be part of getting a hotel developed?” Signer asked.

Brown said Dewberry is planning on using the spaces as valet parking.

“I would assume that they would need to find a comparable number of spaces in relatively close proximity to this site,” Brown said.

Signer said if council turned down the parking lease agreement, the result could be a non-luxury hotel.

“It was a luxury hotel [with] a very narrow margin for hotel financing,” Signer said. “The other alternative is that it just ends up being a low-rent hotel. I know that was the other alternative, that it’s a Ramada or a Marriott. No offense to those, but this was always a policy choice with this being built as a hotel, does it end up to be something that doesn’t add to the spending power on the Downtown Mall?”

Fenwick said he felt that if council did not act, the city would be reneging on a deal.

“I don’t like the city to be put in a position where they’ve led people down the road believing one thing and then at the last minute to say we changed our mind,” Fenwick said.

Council voted 3-2 on the lease with Vice Mayor Wes Bellamy and Councilor Kristin Szakos voting no.

“I think that the development will make a fair amount of profit for its owners who are already quite wealthy,” Szakos said. “It takes a lot of money out of our tax base over the course of years that it’s built.”

Signer said he hoped Dewberry follows the debate closely to see the misgivings of the community. Galvin pushed back on that idea.

“Mr. Dewberry is not going to care about our debate tonight,” Galvin said. “The bottom line is we need to move forward with the deal and that’s all there is to it.”