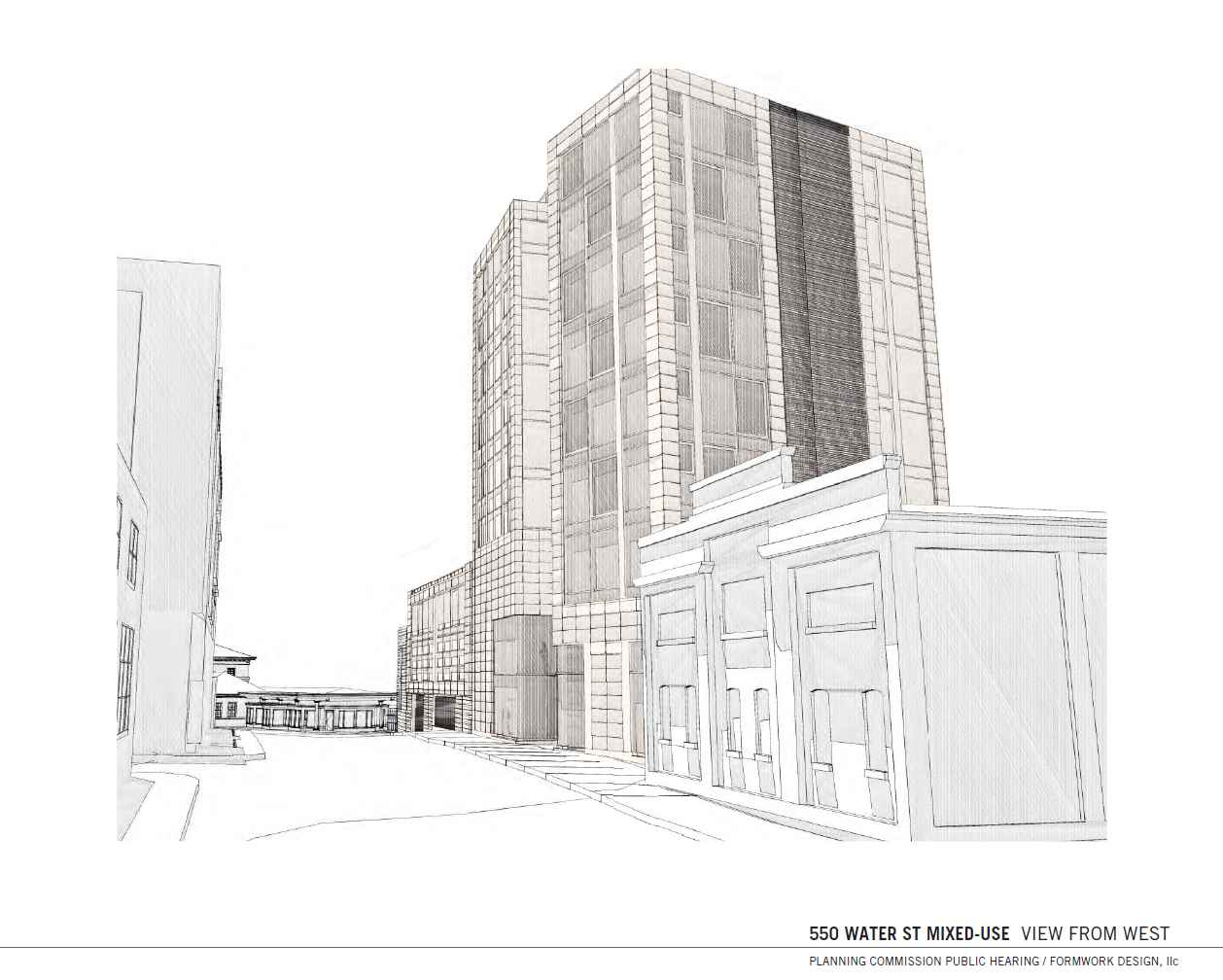 The Charlottesville Planning Commission has cast doubt on a developer’s plan to build a nine-story luxury apartment tower on Water Street.

The commission voted 4-2 on Tuesday to recommend denial of a special use permit allowing developer Andrew Baldwin to exceed the 70-foot maximum limit allowed by-right at 550 E. Water St.

“I like the concept and direction, but it’s maybe just a little too intense,” Commissioner Kurt Keesecker said.

“The intention is to displace building mass and the interior volume of the building to make a different composition to make a better experience on the street,” architect Robert Nichols said.

If built, the project would feature three stories of office space on the quarter-acre lot with a single residential unit on each of the remaining six floors.

The City Council has granted a permit allowing the Market Plaza building to rise to 101 feet a few blocks to the west. That building is expected to be under construction later this year.

“Our Comprehensive Plan does envision increased intensity in our downtown area and offers a variety of ways of doing that either through a mix of uses, increased height, increased density and a number of those things,” said city planner Brian Haluska.

In June, the Board of Architectural Review indicated the taller height at 550 East Water would have an adverse effect on the historic district.

Staff followed suit and recommended denial of the permit.

Nichols argued the site is part of the downtown core and should reflect the city’s growing urban character.

“We are clearly participating in the Fifth and Water Street intersection, and that’s where we’ve put the bulk of occupancy,” Nichols said.

Baldwin said the project is in the spirit of the Comprehensive Plan.

“Revitalization of dead areas within the city of Charlottesville are what we need to focus on and provide in a project of this scale,” Baldwin said. He added that he would create pocket parks on either side of the development and install wider sidewalks than currently exist.

However, several people spoke against the permit at the public hearing.

Sam Hellman, a resident of the Holsinger, located across the street from the proposed site, said the proposal “drastically overburdens” the triangle-shaped property.

“The worst thing you can do in a street is put a tall building on the south side,” Hellman said. “It shields the sun and will completely be in the sight line of almost every place on the Downtown Mall.”

Hellman questioned whether granting the permit was worth it to the city, given that only six residential units would be created.

One of the owners of the King Building, Tim Michel, also said he was opposed to the permit and hopes the developer will come back with a smaller building.

“This is really too much,” Michel said. “It’s too dense and impacts us too high, and we’ll be in shadow for a good bit of the day.”

However, the owner of the former train station said he supported the permit.

“What I think makes the downtown exciting is the juxtaposition between new architecture [and old architecture] from good architects that can do something different that makes vibrancy that is so important,” Neal Sansovich said.

Another downtown property owner spoke in favor of the permit.

“The irregularity in the downtown area is something that makes it interesting and makes Charlottesville progressive and forward-thinking,” John Lawrence said. “I know in Virginia we like how things used to be in the old days, but I love how Charlottesville over the last few decades has really thoughtfully developed itself.”

Lawrence cited the Live Arts building and the Downtown Transit Center as recent examples of buildings that are forming a new look for Water Street.

The new development is too much for one resident of the Holsinger who said the city needs to respect its historic district and only allow buildings that are harmonious with existing ones.

“If Charlottesville loses its distinctive character, people will stop coming here,” said Patty Myatt. “They don’t want to come to just another version of Northern Virginia or Virginia Beach.”

Commissioner Dan Rosensweig said he could have supported the additional height, but the impact on Water Street would be too great. He added he liked the concept of splitting the building into tall and short sections, but 101 feet was too high.

Several other commissioners agreed they could support a shorter building.

After the public hearing, Commissioner John Santoski quickly made a motion to recommend denial which was quickly seconded by Commissioner Genevieve Keller.

Baldwin said he was willing to defer his vote to return with a smaller building, but Santoski was not willing to withdraw the motion.

Keesecker and Rosensweig voted against the motion to recommend denial. The City Council will review the project at a future meeting.