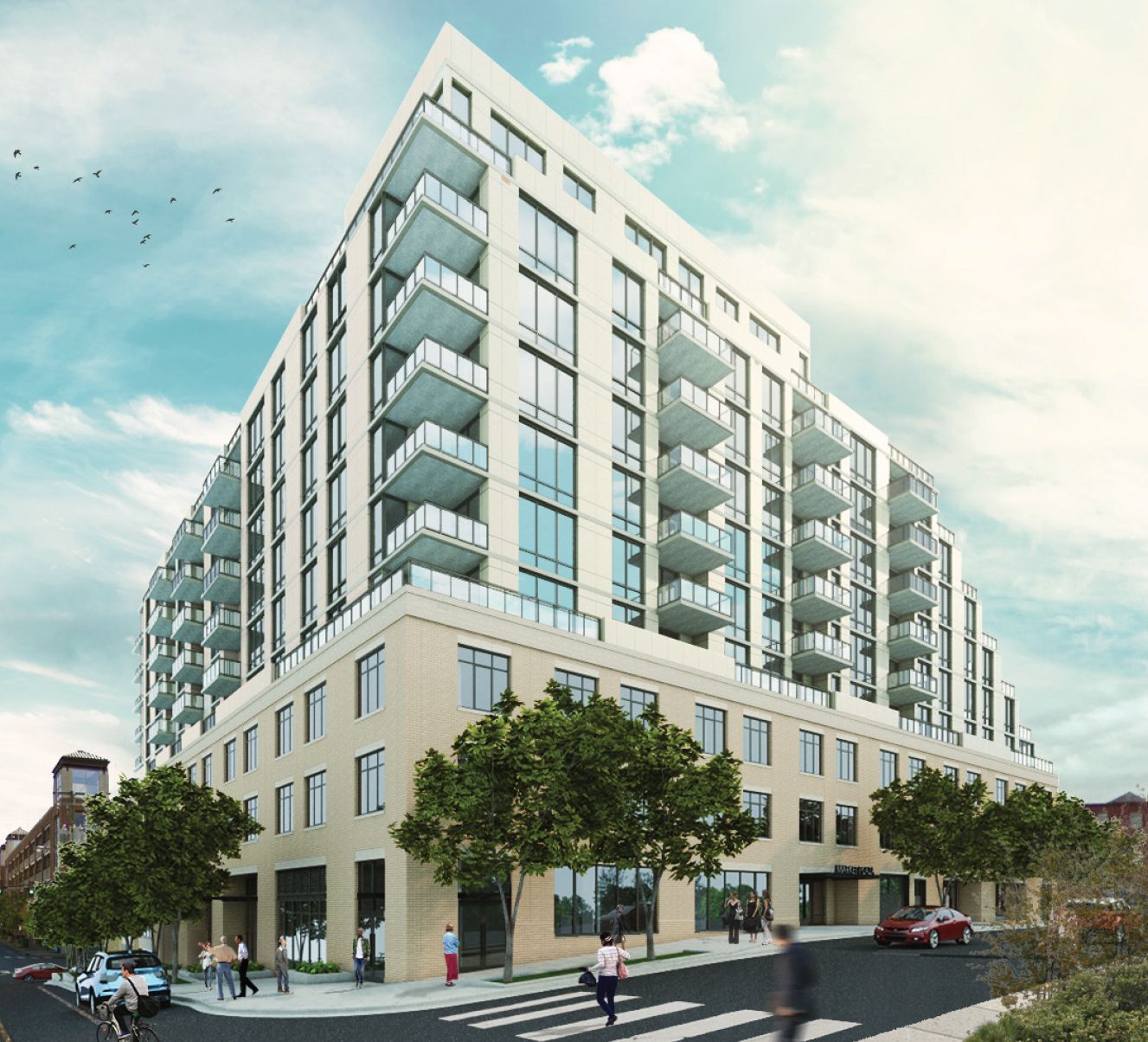 Rendering of new design for West2nd building on Water Street

The Charlottesville Planning Commission voted 5-1 Tuesday to recommend additional residential density for the West2nd mixed-use project on Water Street, but declined to support new designs that have been submitted for the L-shaped building.

Commissioners said there were too many unanswered questions about affordable housing and other issues to recommend approval of developer Keith Woodard’s full request.

“I feel like there are so many pieces of this puzzle which we don’t know,” said Commissioner Taneia Dowell.

The City Council approved a special use permit allowing for additional height and density in December 2014 following a public competition in which developers were asked to submit proposals to use a city-owned parking lot as part of a project that would provide a permanent home for the City Market.

Three years later, ground has not been broken on the project.

“Ideally we would be starting construction of this project,” said Sacha Rosen with R2L: Architects. “Everything was ready, but however, the project — due to increasing construction costs and complexity of design — it was no longer feasible.”

Rosen said the project was revised to find ways to bring down the cost of construction. For instance, 3½ levels of underground parking have become two. An indoor space that had been intended to serve as a public event space will now be retail.

Perhaps most significantly, Woodard is now requesting an amendment to the permit to increase the allowed residential density to 83 units per acre, which would allow for a total of 97 residential units. That’s up from 69 units.

“Staff does support the increase in residential density on the site,” said city planner Brian Haluska. “Where the debate on this falls is in the proposed amendments to those conditions that the applicant has requested.”

Under the new proposal, there would be 46,035 square feet of office space, 16,190 square feet of retail space and a 24,390 square foot open plaza in the southeast corner of the lot that would serve as the market.

There would be 252 parking spaces built into the structure. Of those, 156 must be made available to the public based on the terms of the City Council’s request for proposals.

Since the original permit was approved, affordable housing has become a much more pressing issue in the community. Commissioners had asked for more information on how the West2nd project would comply.

“With this project, [city housing coordinator] Stacy Pethia did review the proposal and did make a note that based on the drawings, their requirements are for 25 affordable units on- or off-site or an approximate cost of $450,000,” Haluska said. “They are actively pursuing off-site units.”

However, Pethia’s calculations were not made in writing for the hearing. Woodard said his plan is to build affordable units elsewhere in the city.

“Our plan is to build 14 to 16 units on Harris Street,” Woodard said, adding he had not seen Pethia’s calculations.

“We for one need to get that number clarified because there was some confusion,” said Commissioner Corey Clayborne.

As part of the project, Council has already voted to close the portion First Street that borders the project so it can become a pedestrian walkway.

During the public hearing, several residents of South Street appeared to state opposition to any closure of their street at any time.

Rosen said Woodward has been meeting with representatives of the Department of Parks and Recreation to obtain more details about how the market would work. He added there will be a future meeting with vendors to accommodate their feedback into the design.

“We wanted to get our ducks in a row first,” Rosen said. “The kinds of things we’ve been discussing are the width of the aisles between the stalls.”

Rosen said the final number of units could be reduced, potentially if some buyers opt to combine them.

“We are not opposed to increasing the density of the project but agree with staff that any additional density should be accommodated within the design that was already approved,” said Morgan Butler, an attorney with the Southern Environmental Law Center.

Butler said the application did not appear ready for review, a sentiment echoed by a resident of the nearby Gleason buildings.

“The winning bidder now says he needs to do a do-over, and that is not fair,” said Jeanne Maushammer.

At one point, commissioners seemed poised to seek a deferral given the non-density related changes associated with the request for an amended permit.

“I am of the opinion that these are major changes,” said Commissioner Genevieve Keller. “I think it probably deserves another look.

Commission Chairwoman Lisa Green said she was concerned about changes to the market space.

“This is city-owned property that the city is selling through a request for proposals to provide a city market for the public,” Green said.

Deputy City Attorney Lisa Robertson said the permit does not cover the South Street closure and that item was not before them.

“The zoning issue in front of you is whether there is adequate room on the site for the market,” Robertson said.

The Board of Architectural Review ruled on Nov. 21 that the additional density would not have an effect on the downtown historic district. However, they also requested to review the building’s height.