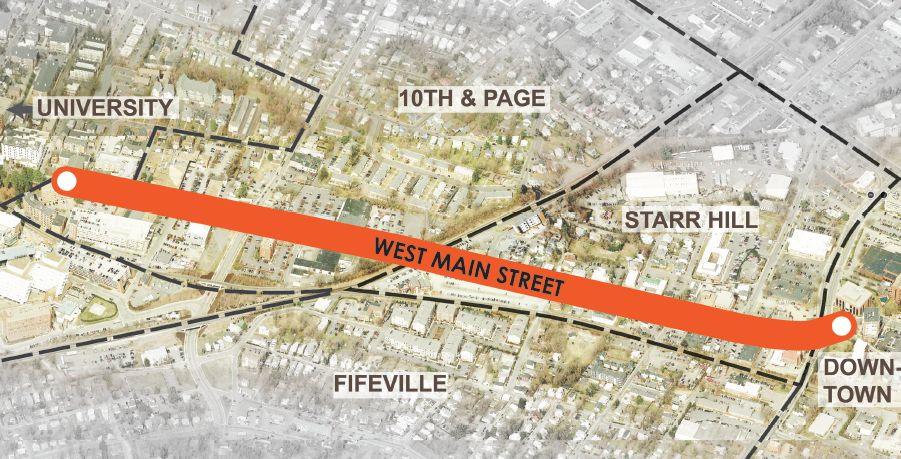 The future of a proposed new look to Charlottesville’s West Main Street is in question after a leading city councilor gave his critique Tuesday night.

“The whole West Main Street plan is not a coherent design,” said Mayor Satyendra Huja. “It is a cluttered plan with too many inconsistent concepts.”

“I plan to vote against this current plan,” he said.

City Council’s discussion comes on the heels of Jim Tolbert’s announcement that he has taken a new job in Georgia, ending his tenure as director of the Charlottesville Neighborhood Development Services Department.

Absent support from at least three of five councilors, the street-level plans may be set aside while new buildings approved by the Council, some as tall as nine stories, continue the corridor’s vertical transformation.

The city hired Rhodeside & Harwell of Alexandria for $340,000 in 2013 to study the corridor and create a new layout for bikes, pedestrians and vehicles.

The firm’s draft report gives two choices for West Main between Jefferson Park Avenue and Ninth Street. Both options provide 9-feet-wide sidewalks and wider bike lanes, but one would feature a median and would eliminate on-street parking.

Thirty-three of 85 on-street parking spaces on the eastern side of the street would be removed.

The Council was briefed on the final report in December as well as on an estimated $30 million price tag that would include placing utility lines underground. Monday’s meeting was councilors’ first opportunity to share their reactions to the plan.

“The desire to please everyone has resulted in an incoherent design,” Huja said, adding that he oversaw other streetscape projects, such as the Downtown Mall, the Corner district and Court Square, when he was the city’s planning director.

Kathy Galvin said she would have liked to have seen Huja’s statement beforehand so she could respond and staff should have prepared materials in advance.

“I feel a structured conversation would have been more productive,” Galvin said.

Kristin Szakos said the consultant has done a good job of bringing people in and adjusting the plan as a result.

“What you see as a hodge-podge to me is a responsive design,” Szakos said.

However, at least three councilors have expressed concerns about the plan, which has not yet been adopted.

Bob Fenwick said has been concerned about the project from the beginning. He said he does not want to remove any parking spaces, and he is worried that changes that would slow down traffic on West Main Street would encourage drivers to cut through the Fifeville and Tenth and Page neighborhoods.

“We could have done as good a job as they [the consultants] did and we could have saved a half-million dollars,” Fenwick said.

“My big concern is that time would go on and on, and it would come to Council for a vote and we would say, ‘No,’” Smith said. “It’s important for everyone to have an inkling of what the Council is hearing.”

Smith also said the Council needs to focus on other places in the city that need attention.

“There are so many nice elements to West Main that we have already, and we need some of those elements in other parts of our city,” Smith said.

However, Galvin said the city has studied West Main Street for decades, while infrastructure is deteriorating. She said the city needs to update the road because of its strategic importance.

“We are dealing with a major corridor that is one of the most heavily trafficked corridors for cyclists and walking in the city,” Galvin said. “We have one of the most well-functioning pedestrian malls in the country and we have a World Heritage site at the other end that has thousands of students.”

Council will hold another work session on the West Main plan later this winter.