A better Charlottesville may mean going slow on West Main 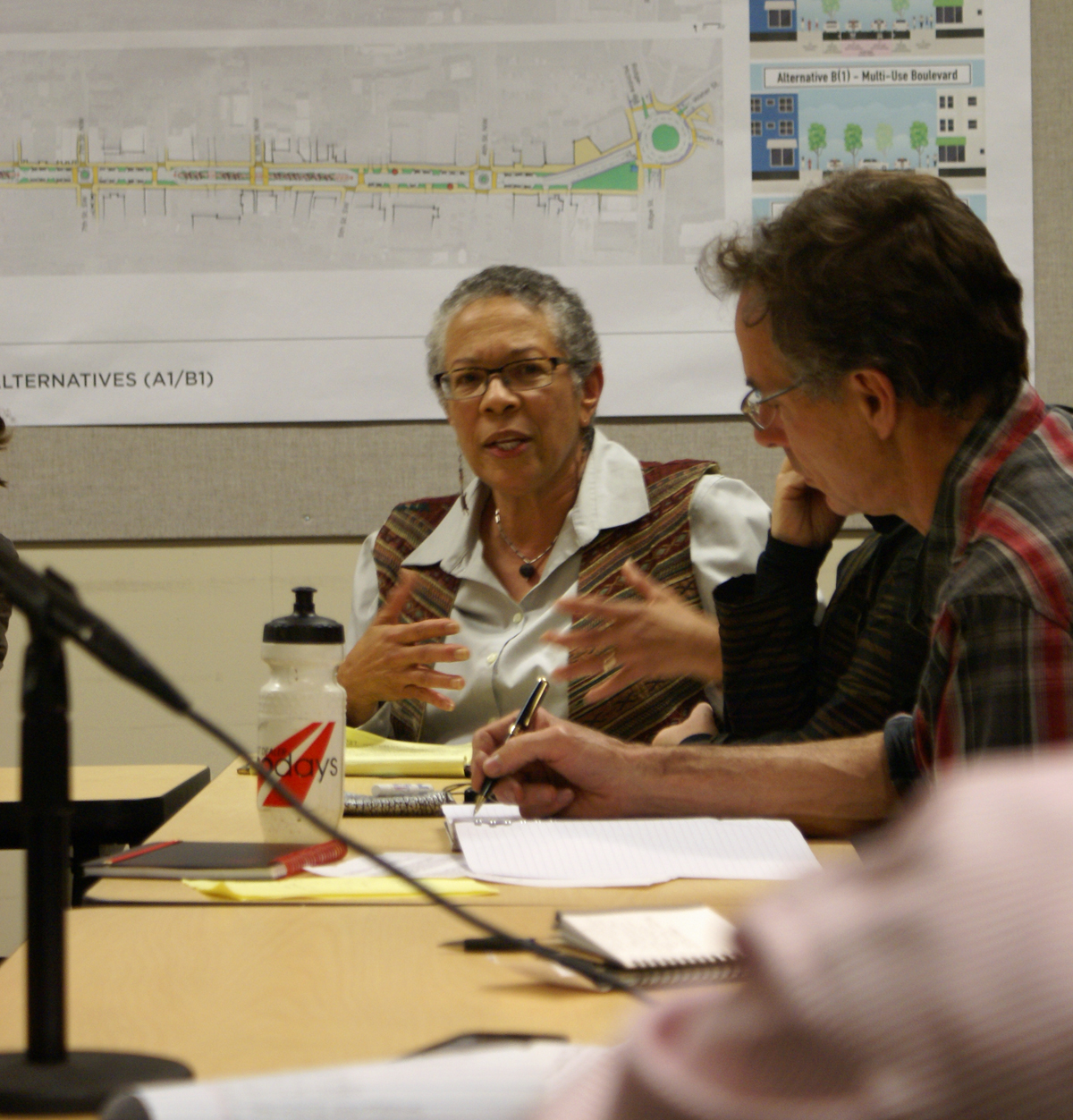 Plans for a new streetscape on Charlottesville’s West Main Street are taking shape.

The planning area runs between the intersections at Ridge-McIntire and Jefferson Park Avenue, connecting the Downtown Mall and the University of Virginia.

City Councilor Kathy Galvin summed up the consensus of the group at the end of the meeting:

“It’s been winnowed down … and it’s important to understand that there’s not anyone here that feels that the existing conditions should be preserved,” Galvin said. “We are all here understanding that something needs to happen.”

While the status quo may not be acceptable, getting to a plan the community will support and that the city will actually implement looms as a major challenge.

“Do any of these designs that I am voting on have price tags? Are these things realistic?” asked Peter Castiglione, co-owner of the Maya restaurant, who said three previous studies were sitting on the shelf. “Am I going to make a decision that might be realized as we do budgets over the next couple of years?”

Galvin said she hopes the consultants will distill the community’s input down to two options: a “go to” street, creating more of a destination, and a “go through” street, one emphasizing an efficient multi-modal transportation boulevard.

“A ‘go to’ street is about slowing things down,” Galvin said. “It doesn’t preclude cars, but if the cars are in a hurry, they will go somewhere else.”

The limited expanse between the buildings on each side of West Main is forcing the consultants to get creative as they try to balance the goals of public transit, bicyclists, wider sidewalks and business needs.

The steering committee peppered the consultants with questions on parking availability and traffic growth, particularly with the new university-oriented housing complexes under construction.

Consultant Dena Rhodeside said they were designing for travel speeds of 15 mph and expected a reduction in the total number of vehicles using the street.

In some proposals, new angled parking spaces are suggested in the middle of the street. In others, some traffic signals are replaced with mini roundabouts. Buses would collect and drop off passengers from the travel lanes as opposed to pulling over at bus stops.

Pat Edwards, a steering committee member who lives two blocks off West Main near the Jefferson School, expressed her frustration with a growing amount of cut-through traffic.

“The neighborhoods have to be protected,” Edwards said. “Funneling traffic off of West Main Street is going to happen if this [project] happens.”

The question of where thousands of vehicle trips might be shifted hit home with Galvin.

“This shows me that we need further and deeper conversations with the historic neighborhoods that flank West Main,” Galvin said the day after the meeting. “[Edwards] raises good points about traffic management. We don’t want traffic cutting through historic neighborhoods, and it needs to be directed to streets well-suited for that traffic.”

Castiglione, who expressed concerns about losing parking to dedicated bicycle lanes, suggested a win-win for businesses and bike safety could be more parking spaces, especially with more people living on West Main.

“Since the traffic is going to come no matter what, if we just slowed it, and created more parking, isn’t that a win-win for everybody?” Castiglione asked. “Creating more parking keeps them out of your neighborhoods and keeps them walking [on West Main].”

Rhodeside also reassured business owners that there is a significant amount of parking near West Main.

“We’ve looked at the availability of other parking spaces within 600 feet of West Main Street,” Rhodeside said, “and there are 4,000 parking spaces … not including the hospital.”

“Clearly not all of those spaces are accessible to the public now,” Rhodeside noted. “One of the things this effort needs to recommend is that the city revisit its parking management policies in this area to start allowing for negotiations with [private property owners] to look off the street for parking.”

Edwards, a local resident for the past 50 years, said the changes needed to carefully consider the needs of the nearby African-American churches and other long-time residents.

“I feel like I woke up one morning and I am in a different city,” Edwards said. “I don’t want to be racist, I don’t want to see color, but I think there is a cultural disconnect. I feel like people have taken over the city and suddenly it’s all about bikers.”

“There are a whole lot of people who are not here at this table,” Edwards said. “These kinds of things seem to happen in Charlottesville, and the people they happen to are not the people who are going to sit here in this room on this committee.”

Architect Elliot Rhodeside said the next step would be for his team to summarize the input from the committee and City Council members, and then further develop the preferred alternatives for the committee’s consideration. The next public input session is expected to be held in May.

The end product this summer will be detailed construction documents to guide future city investments on West Main.