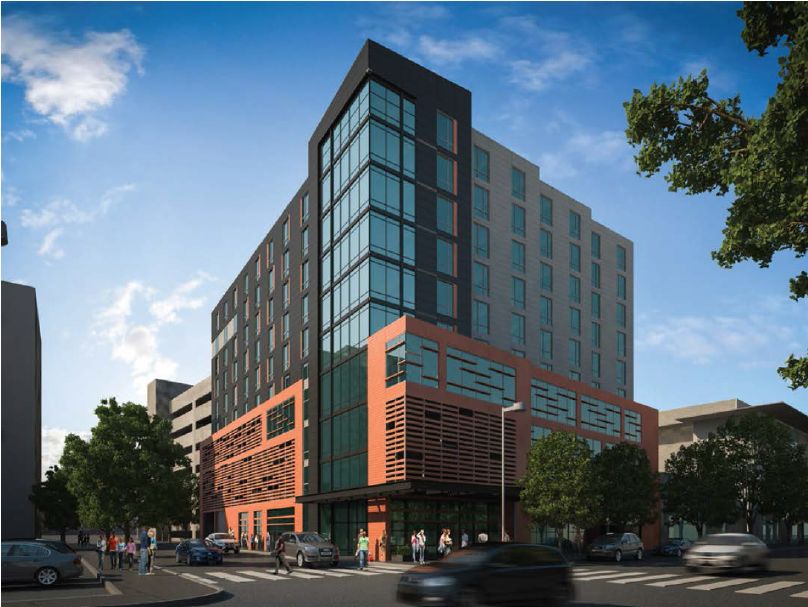 For the third time in the past two years, the Charlottesville Planning Commission has recommended approval of a special-use permit that will allow a new building on West Main Street to be 101 feet tall, the maximum allowed by current zoning.

Washington-based Carr Hospitality wants to build a nine-story hotel at 1106 W. Main St. along the same stretch of road where the Flats at West Village apartment building and the University of Virginia’s Battle Building recently have been constructed.

The recent recommendation came despite concerns from some community members that the corridor has become overbuilt and a consultant’s recommendation in the draft West Main Streetscape study that the city lower the maximum height of new buildings.

“This proposal is the latest application for a new building on West Main Street in which the applicant has asked for the maximum height that can be permitted,” said Morgan Butler, of the Southern Environmental Law Center, who asked the commission to ensure that the new building would not detract from the street’s pedestrian-friendly character.

However, Commissioner Lisa Green said the City Council already has set a precedent.

“We wanted urban density, and this is what we’re getting,” Green said. “This should not be a surprise to anyone.”

The city’s zoning code allows buildings on the southern side of West Main to be up to 70 feet tall but developers can seek a permit to extend the height to 101 feet.

Other developers have secured permission for an eight-story building at 1000 W. Main, a project that is set to go before the Board of Architectural Review on Tuesday. A six-story building has been approved on the site of Republic Plaza on the northern side of the road. However, construction has not begun on either of these projects.

Ashley Cooper, a local planner representing Carr Hospitality, said the additional height for the hotel is justified by the city’s previous approvals.

“This really is a sub-area of West Main that has really seen substantial development already setting the tone for larger buildings with greater height,” Cooper said.

The site is surrounded on three sides by properties owned by UVa, and Cooper said they have been working to reduce the impacts on the adjacent medical laboratory.

However, a university representative said he was concerned about the impact the project would have on 11th Street, a major gateway to the Medical Center.

“Our institutional interest in this project arises from concerns over access to the hospital, parking garages and nearby offices,” said Charlie Hurt, director of real estate and leasing services at UVa.

Hurt insisted that two-way traffic be maintained on 11th Street during and after construction. He said the additional traffic may cause the university to cancel plans to add a left-hand turn lane onto West Main.

Cooper said the existing conditions on 11th Street are less than ideal for pedestrians.

“What we see at this corner is really a void in the space,” Cooper said. “We believe this is a gateway site for the Medical Center.”

The company’s plans show an 8-foot-wide sidewalk on 11th Street. The commission also required trees or other plantings to be placed on the street.

“If we want to create a walkable city, we need to be walking in places we want to walk and not in a canyon up tight against a building,” said Commissioner Jody Lahendro.

Carr Hospitality had wanted to create an area on West Main Street where vehicles could park for easy access to the lobby.

“People will be coming to this building from far reaches and may not know this area,” Cooper said. “We’re very concerned that if there’s not a hotel drop-off, that people will just stop in the middle of the road.”

Cooper said this pull-off would be similar to the loading zones at several places farther west, where the street becomes University Avenue.

However, commissioners denied the pull-off, saying it might conflict with the city’s plans for a new streetscape on West Main.

“One of the concerns with those types of drop-offs is that we do envision a bike lane all the way down West Main and this would allow cars to go across that bike lane onto private property, which would be a disruption to bike traffic,” said City Planner Brian Haluska.

The City Council is set to hold a work session on the West Main streetscape Thursday. The corridor study, being produced by Rhodeside & Harwell, will suggest lower height limits for future buildings.