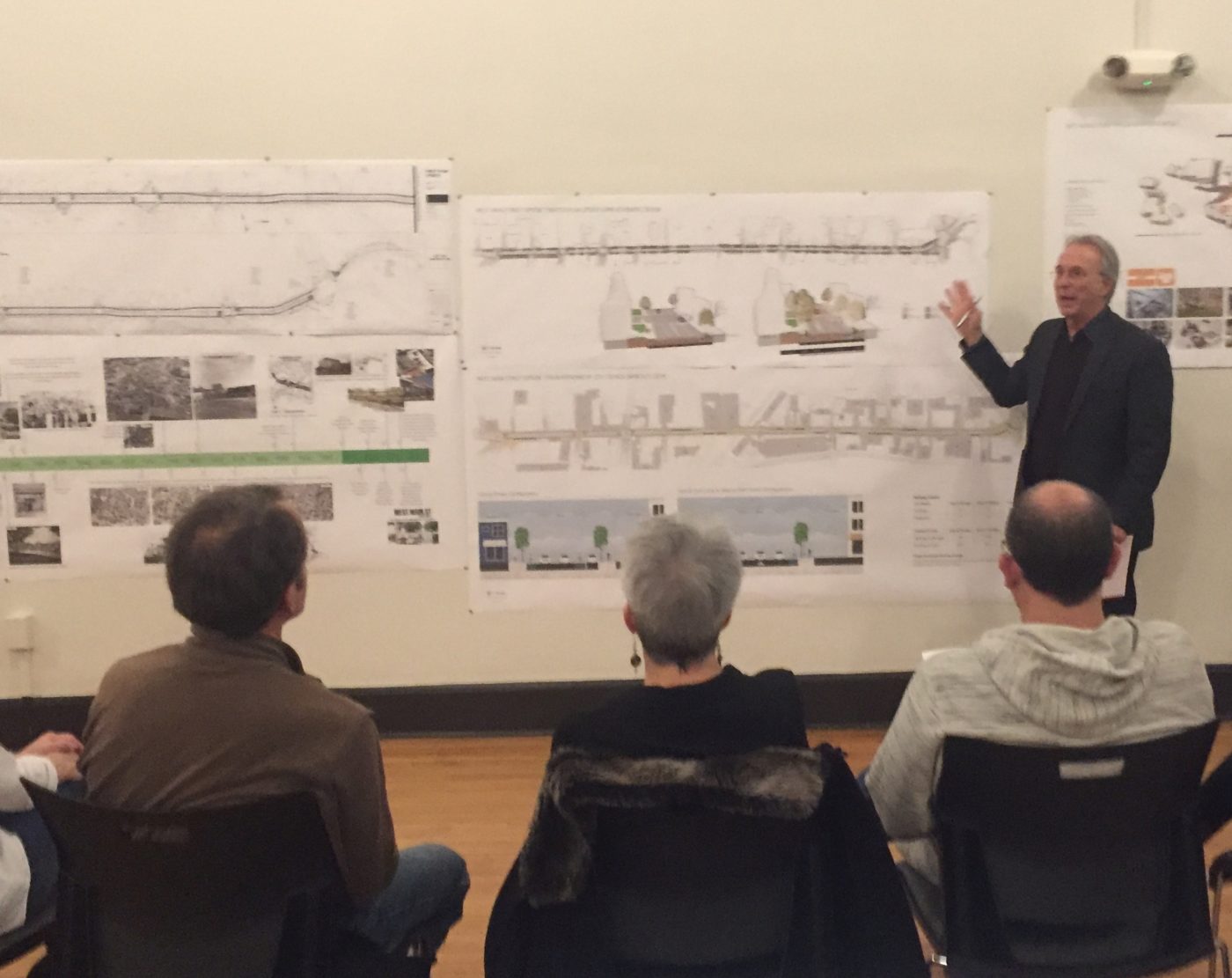 Developer of The Standard to pay $665,000 to city housing fundW. Main projects could increase corridor’s tax base tenfoldCharlottesville architecture panel gets peek at West Main schematics

Residents and business owners in the area of Charlottesville’s West Main Street had the opportunity this week to share their visions of how a $30 million makeover of the road should fit in with the cultural history of adjacent neighborhoods.

Residents and business owners in the area of Charlottesville’s West Main Street had the opportunity this week to share their visions of how a $30 million makeover of the road should fit in with the cultural history of adjacent neighborhoods.

In March, the City Council chose a direction for how West Main should be reconfigured with wider sidewalks, additional bike lanes and new street trees. Additionally, overhead utility lines are to be placed underground.

The Alexandria-based firm of Rhodeside & Harwell was hired in 2013 to conduct a new study of the street to replace a conceptual design that had been developed by the firm LPDA in 2010.

“One of the things we learned clearly from the master planning process is that West Main Street serves a lot of functions,” said Dena Rhodeside. “People travel from one place to another. But it also serves for many people as a place in and of itself.”

Rhodeside & Harwell had unveiled a concept for the streetscape in January 2015 but it did not have the support of then-City Councilor Satyendra Huja, who called it “a cluttered plan with too many inconsistent concepts.”

The firm spent the rest of that year making adjustments, and a new City Council, without Huja, who did not seek re-election, adopted the plan this past March. Rhodeside & Harwell was then hired again to turn the concept into construction documents to be completed in the spring of 2018.

To date, Rhodeside & Harwell has been paid $1.37 million for its work, according to Carrie Rainey, the city’s urban designer.

Rhodeside & Harwell is now in the second phase of the process by developing a schematic design. This will be presented to the City Council in late January with a new cost estimate.

Rhodeside said the latter will affect decisions such as what kind of concrete pavers will be used in the new sidewalks. He said the work is intended to ensure that the final blueprints do not contain elements that are too expensive.

A small group of Starr Hill residents and business owners gathered at the Jefferson School African American Heritage Center on Thursday to view a preliminary version of the schematic design. They had the chance to ask detailed questions such as locations of traffic lights and specifics about the cost estimate.

One man said he wants to ensure whatever trees are planted provide for “gorgeous” foliage in the autumn.

“In addition to being ecologically correct, they need to be beautiful, as well,” he said.

Planners with Rhodeside told the group that they are thinking a lot about the trees.

“We have a lot of ideas about how to make the trees great for the city,” said Elliot Rhodeside. “We’re thinking about trends about developing and planting so there is not a monoculture.”

For instance, larger trees such as willow oaks will be located at major intersections, whereas smaller trees will be along the street itself.

Rhodeside also said that tree-planting technology has come a long way since Lawrence Halprin designed the Downtown Mall in the early ’70s.

“Nothing is finalized but we are committed to not using just one species,” he said.

Attendees were asked to give their thoughts on the street.

“One thing that is cool about West Main is that there is variety,” said Ellen Bassett, an associate professor of urban planning at UVa’s School of Architecture.

“I find it much more stimulating to walk down West Main than to walk down the mall,” she said. “This is such an important corridor for the city.”

Rhodeside said the streetscape is intended to help West Main establish its own identity and not replicate the Downtown Mall.

However, one Starr Hill resident said the previous identity has been erased.

“One of the things that has definitely been happening is that West Main Street has lost its character,” said Brad Worrell.

For instance, Worrell lamented that a building torn down to make way for The Flats at West Village was not redeveloped like so many other buildings on West Main have been. He pointed out that the late Gabe Silverman saved a lot of structures that might otherwise have been demolished.

“He repurposed buildings that existed,” Worrell said. “I would like us to try to save not just the precious gems, but some of the other buildings, too.”

Between now and the time construction could begin, several new buildings will have gone up, including The Standard, a second Marriott Hotel and an apartment complex behind the Blue Moon Diner.

A section of the northern sidewalk across from The Flats at West Village has now been closed to make way for the demolition of Republic Plaza, a structure that was built in 1989 and is expected to be fully removed by the middle of January.

The capital improvement budget for the current fiscal year has set aside $10 million in city funds for the project. The city has made an application for an additional $18.3 million through the Virginia Department of Transportation’s Smart Scale program and will find out in January whether it will be eligible for funding.