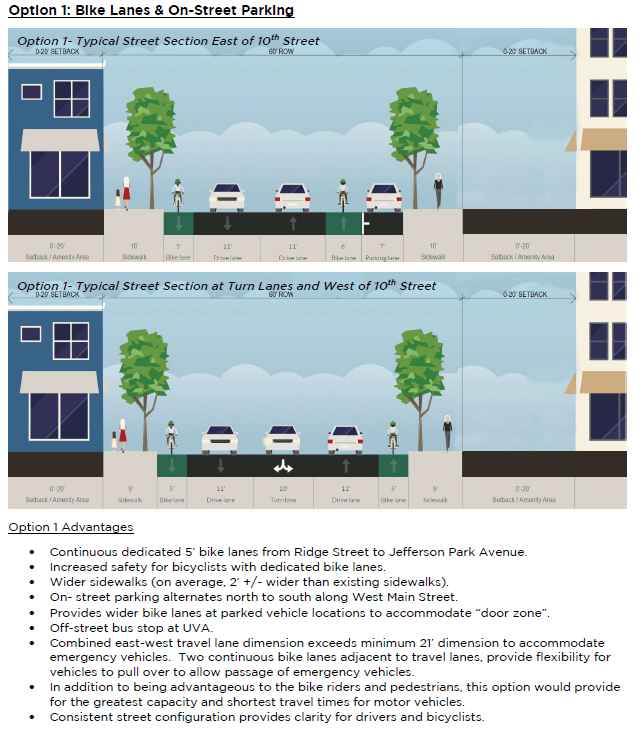 http://s3.amazonaws.com/cville/cm/mutlimedia/20160321-West-Main-Resolution.pdf Charlottesville City Council close to making West Main height changeBAR defers decision on one West Main project, partially approves anotherCharlottesville panel recommends West Main rezoning for third time
After three years of study and discussion, the Charlottesville City Council has decided a course of action for reconfiguring West Main Street.
“This is going to be a beautiful, beautiful street that will make us as proud as the Downtown Mall did over thirty years ago,” said City Councilor Kathy Galvin. “It’s time for the next new, big thing for this city to make us feel like we belong in a world class city.”
Council voted in February 2013 to hire a consultant to develop a new streetscape for a roadway in transition.
Since then, several new buildings have been constructed, including the Battle Building, the Flats at West Village and the new Marriott Residence Inn. Other projects are either planned or under construction.
The streetscape project was delayed in January 2015 when then-Mayor Satyendra Huja indicated he would not support a conceptual plan developed by the firm Rhodeside & Harwell.
Fourteen months later, the council voted unanimously to direct Rhodeside & Harwell to develop construction documents for a plan that would remove 25 parking spaces, widen sidewalks and increase the number of street trees.
“[This option] features continuous bike lanes throughout the entire corridor and has parking alternating on one side of the street or the other,” said Carrie Rainey, the city’s urban designer.
The adopted resolution calls on Charlottesville officials to meet with counterparts at the University of Virginia to identify “shared investment opportunities” within three months.
Within six months, Rhodeside & Harwell would proceed with the creation of construction documents to prepare a bid and an action plan for implementation.
Rainey said those documents will inform later decisions, such as whether to remove a slip lane that would allow eastbound vehicles to make a right turn onto southbound Ridge Street.

Click for larger image
To date, Rhodeside & Harwell has been paid $450,000 for their work. Rainey said there is no price tag for construction documents, but the council has about $1.1 million in funds previously allocated for West Main.
A new cost estimate and a phasing plan for the total project would be developed after construction documents are produced.
The city’s Bicycle and Pedestrian Committee unanimously recommended the option.
“West Main is the only level and direct connection between the University of Virginia and downtown and is the highest-used bicycle route in the city,” said Scott Paisley, owner of Blue Wheel Bicycles.
One business owner said he was concerned removing the spaces would force motorists into adjoining neighborhoods to look for parking.
“Parking, sidewalk and utilities are the paramount variables that need to be addressed on West Main Street,” said Peter Castiglione, a co-owner of Maya Restaurant.
Galvin also wants evaluation of funding strategies, including tax-increment financing, business improvement districts and the installation of parking meters.
Ron Sessoms, with Rhodeside & Harwell, said metering spaces might help them turn over more frequently. He also suggested that employees who work on West Main could park remotely and be shuttled in.
“There’s a lot of businesses on West Main, and oftentimes those employees utilize on-street parking which could instead be used by patrons,” Sessoms said.
Implementation of a parking plan would include developing new structured parking, meters and restriping of on-street spaces.
Mayor Mike Signer said retaining on-street parking is important for the First Baptist Church and businesses.
“I think we need to take it deadly seriously, and that is one of the reasons I pushed and advocated for very clear instructions to staff that we are including structured parking — that’s new in this plan going forward,” Signer said.
Councilor Bob Fenwick reluctantly voted for the plan but said he would be closely watching implementation.
“There are things we’re going to have to look at if it’s going to work and not just assume that parking is going to work,” Fenwick said.
The council also voted to restrict the maximum height of future buildings on West Main, but one aspect of that rezoning must return to the planning commission.
During their March 7 reading of the rezoning, councilors made a change that would have increased the by-right density from 43 units per acre to 200 units per acre. However, that change requires a new round of public hearings.
“Arguably, it rezones property to what some could argue is a more intensive use,” said city attorney Craig Brown.
The council also directed the planning commission to study the Water Street zoning district to include future redevelopment of the Midway Manor property. Under its current classification, the building could be as high as 101 feet if a future council grants a special-use permit.