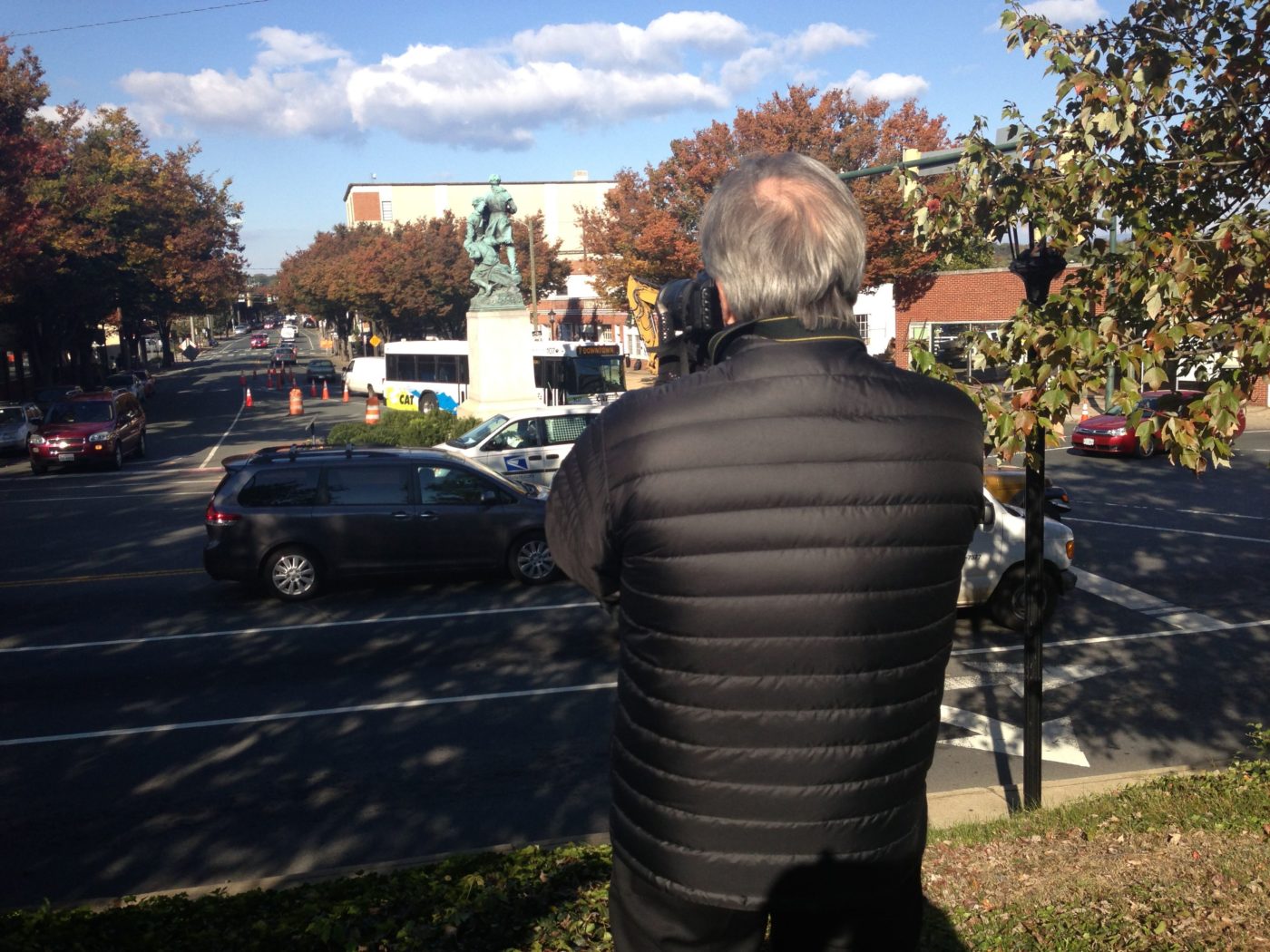 The Charlottesville City Council is planning for a detailed guidebook on West Main Street — with expectations for everything from street trees to sidewalk widths, bike lanes and building setbacks — by the time the next development project begins.

“We know this is an important project for the city,” said Elliot Rhodeside, a principal with Alexandria-based Rhodeside & Harwell.

City staff took designers, architects, and transportation experts on a tour of the street on Thursday to examine existing conditions. Rhodeside & Harwell will receive $340,000 to develop the streetscape plan.

The tour began with about three dozen city staff and consultants climbing an embankment to access private green space on the grounds of the Midway Manor apartment complex. The area is elevated above the five-way intersection where the vehicular portion West Main Street begins.

Standing in the green space, Rhodeside said he felt the intersection was confusing and hid downtown from view.

Jim Tolbert, the city’s director of neighborhood development services, said lane closures due to utility relocation for the Marriot Residence Inn will provide a test run for how the intersection could be reconfigured.

“We’re going to see what happens,” Tolbert said.  He also suggested that an option of closing access to South Street.

The walk also provided an opportunity for the group to learn about the past and the future of West Main.

The group paused to inspect an old trolley railway dug up in the utility relocation. They also walked past a spot on Fourth Street where a cyclist was killed in 2010 by a public works vehicle.

After crossing the Drewary Brown Bridge near the Amtrak station, they viewed construction of the Flats at West Village and learned about two other student housing complexes proposed nearby.

The tour ended at the University of Virginia’s Battle Building, which faces West Main with several stories of glass windows. Next door, crews are slowly removing the Blake Center to make way for a public plaza.

Rhodeside asked members of the task force to describe how they would envision a successful study.

“It is a multi-use generational space that adds amenities to this location,” Douglas said.

Beth Meyer, a landscape architecture professor at the University of Virginia, said she wanted the streetscape to enhance public space to create ‘social and ecological infrastructure.’

“West Main is a physically uncomfortable place to walk and bike,” said Rachel Lloyd. She said she wanted better sidewalks, shade trees, and other amenities. She said she worried that the street may take on a “canyon-like quality” when new multi-story buildings are erected.

Scott Paisley, owner of Blue Wheel Bicycles, suggested removing as much on-street parking as possible in order to make it safer for cyclists.

“Right now it is a running of the gauntlet,” Paisley said, pointing out that drivers occasionally open their doors into the bike lane, creating a dangerous obstacle.

City Planning Commissioner Genevieve Keller said the study should help create a true mixed-use zone, but said she was concerned the moment may have been due to the new construction.

“To some extent, this project is going to be putting on Band-Aids caused by the new development,” Keller said. “They’re bedrooms, not communities, and it’s antithetical to the true spirit of the university and the true spirit of what we want in terms of place-making.”

“It’s important to tie in the adjacent neighborhoods,” said Claudette Grant, a city resident and planner with Albemarle County. “What I see happening is that it’s becoming very upscale and the neighborhoods adjacent aren’t going to use the retail and services I see popping up on West Main.”

Grant also said she is concerned West Main will become too much like Broad Street in Richmond, which she said has become overridden with student housing for Virginia Commonwealth University.

City Councilor Kathy Galvin defended the projects because of the property tax revenue that will be generated. She also said developers are implementing visions that have been in city plans for several years.

“This has been a designated growth area since 2001,” Galvin said. “We’ve just not been clear with what we’ve wanted.”

Architect Richard Price said success would mean an end to studies and the beginning of implementation.

“We have studied this to death in some ways,” Price said. “Success is if we start pouring concrete, and if this does not become another study that sits on the shelf.”

With the initial meeting complete, Rhodeside & Harwell staff will begin a review existing conditions and will study the city’s development procedures.

There will be an all-day meeting Dec. 7 to get input from the public. Alternatives will be revealed to the public in late January and the City Council will make a selection in March.