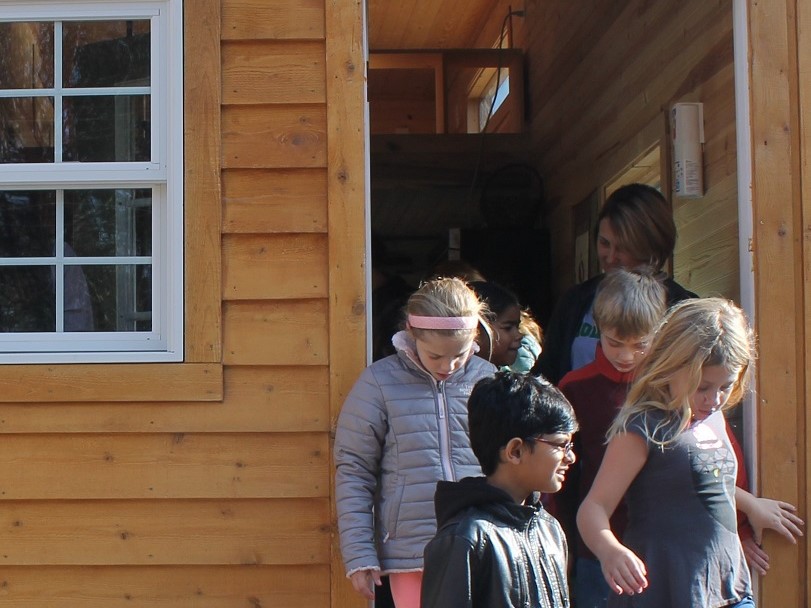 Tiny housing in Charlottesville — is it possible?

Students at Western Albemarle High School recently built a fully functioning tiny house — a 276-square-foot home designed for an individual or a couple.

Last week, third-grade classes from Hollymead Elementary School squeezed inside to get inspiration for an even tinier building project.

The Hollymead students are working in groups to build scale models of tiny houses. After drawing a blueprint on grid paper, the students will send their designs to “the factory” — the home workshop of Staci England, assistant principal — and receive wood walls in their specified lengths.

When they assemble their houses, the students will add miniature furniture that they create with a 3-D printer.

Hollymead’s third grade completed a similar project last year, but used card stock instead of wood to build the models.

“We decided to go the extra mile this year,” said teacher Sarah LaPrade.

Limiting the total perimeter of each house’s walls to 48 inches forces students to think carefully about the design and furnishings. The project also ties into the third grade’s recent economics unit, in which students learned how to differentiate between their “wants” and “needs” as consumers.

“The kids might want their house to have a 50-inch TV with video games, and a Christmas tree, but space is very limited,” said teacher Cindy Hersman. “This project is an opportunity for them to learn about teamwork and compromise.”

Third-grader Genevieve Liebengood said her group had intense discussions about the potential purposes of different portions of the house, and which objects could go inside. “Sometimes we disagreed, but we all worked together and figured it out,” she said.

Hersman said Hollymead, like all Albemarle County schools, is expanding project-based learning at all grade levels.

“With this project, students are making connections to their own lives and seeing where math is useful in the real world,” she said.

Last week, the Hollymead third-graders asked Western Albemarle students a variety of questions about the house, ranging from its construction materials to its ability to accommodate pets.

When they weren’t in the tiny house, the Hollymead classes participated in a short workshop on green building and lifestyle choices led by WAHS students, and built their own gingerbread houses.

Third-grader Lysia Williams said she was open to living in a tiny house one day. “I don’t need much space,” she said. “I think my room at home is too big.”

Kevin Matheny’s shop class at WAHS devoted a full year to building the tiny house. The Associated General Contractors of Virginia’s Piedmont District and the AGCVA’s Virginia Construction Industry Educational Foundation each supported the project with a $3,000 grant. Many local building supply companies donated materials for the house, as well.

After finishing her work on the house, WAHS senior Hana Lagana interned at a local construction firm over the summer. She is gearing up to build a second tiny house in Matheny’s class this year.

“When we started this project last fall, I had no idea that I would be building houses for the next two years — and maybe beyond that,” Lagana said.

Lagana said she hopes to study civil engineering or construction management in college, with a focus on environmentally friendly design.

The original WAHS tiny house still is available for purchase, with proceeds going toward the construction of the second house. Rod Phillips of RE/MAX in Crozet is volunteering as its real estate agent.

When the high school tried to auction off the house in September, the house received two offers that were under the starting bid of $35,000. Phillips said the school’s asking price has since been lowered to $30,000.

Because it sits on a wheeled trailer instead of a permanent foundation, the WAHS tiny house would not be approved as a standalone dwelling unit in Albemarle County or Charlottesville. However, Phillips said it could easily be transported to a location outside of the county.

After the auction, WAHS students taking an entrepreneurship class at Piedmont Virginia Community College began working on a marketing campaign for the tiny house. Students advertised the house at the Mid-Atlantic Tiny House Expo in Maryland, and invited the Charlottesville Tiny House Meetup group to visit last weekend.

Lu Cooley, the meetup’s organizer, said Western Albemarle’s tiny house is comparable to ones that have been showcased on TV shows and in magazines.

“We were kind of blown away by it,” she said. “To have students build a tiny house with only high-level supervision, and to have teachers who are willing to take that on, is everything that education should be.”