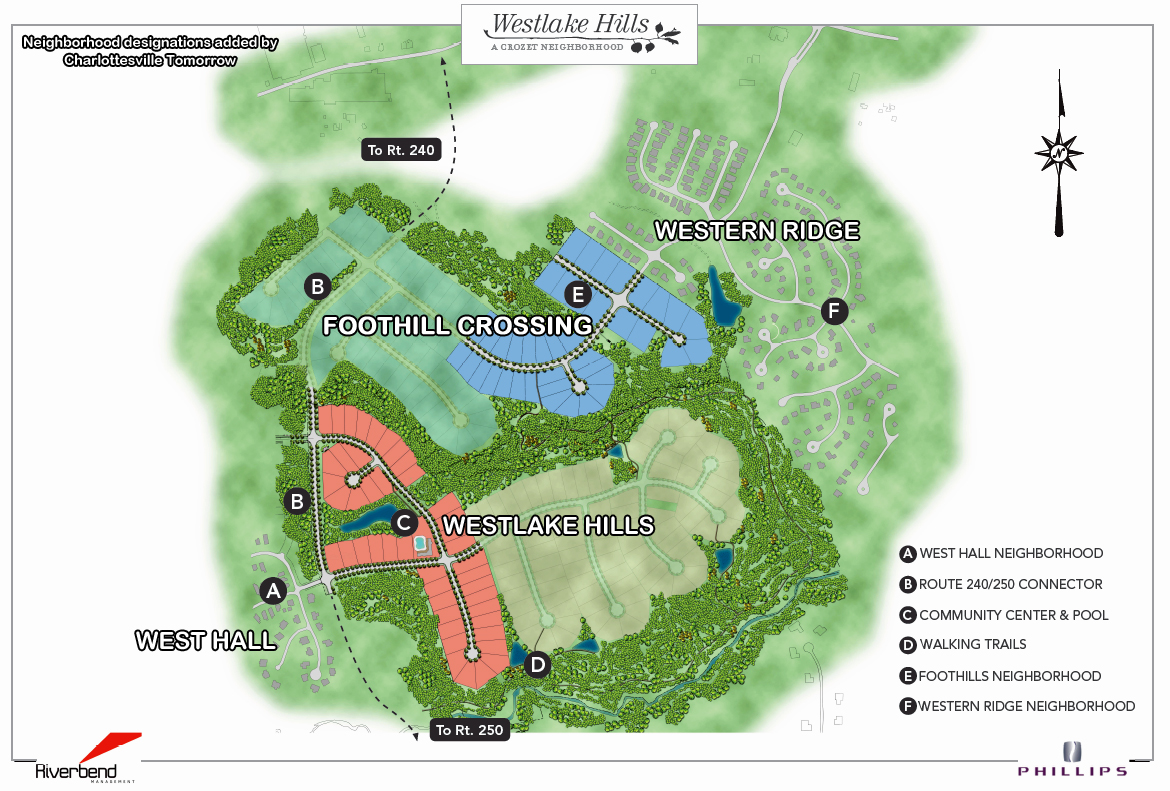 Feedback from the Crozet community has led one local developer to make significant adjustments to plans for a new housing development adjacent to the West Hall neighborhood.

At Wednesday’s meeting of the Crozet Community Advisory Council, residents said they were pleased by the changes shown for Westlake Hills, which will save more trees and better preserve the lay of the land.

“I thought they made very valid points,” said developer Alan Taylor with Riverbend Management. “We spent four to six months incorporating their comments.”

The first phase of Westlake Hills includes lots for 45 homes. In future phases the development will expand to a total of 131 homes on lots ranging from one-half acre to one acre.

Jim Loman, an architect who works at the University of Virginia, is an adjoining property owner in Western Ridge. He and his wife, Cathy, an architect in private practice, both applied their design skills to the first plan submitted in March.

“We were really concerned at the time,” Loman said. “We took the plan and overlaid it with the Crozet Master Plan, particularly its greenway goals, then we walked all around the property taking pictures.”

“We gave that package to the developer, and what he has come back with is substantially different,” Loman said.

Taylor said the entire development was being reduced from 145 to 131 lots and, as a result, only 1.5 acres of critical slopes would be disturbed and about 30 acres of trees would remain intact.

“This is a lot better plan,” Taylor said. “We moved the roadways around to be able to keep the trees that were there. After we did that we agreed that the initial plan was not as good as it could be.”

Ann H. Mallek, chairwoman of the Albemarle Board of Supervisors, said she was also pleased with the changes.

“One of the more startling things is the way you have pulled back off the steep slopes instead of having houses precariously perched,” Mallek told Taylor. “This was something all the neighbors who spoke before had mentioned, so I am very appreciative of that.”

Taylor’s case before the community was also bolstered by the promise of some significant community amenities, including a swimming pool, a stocked year-round fishing pond, trails, sidewalks and street trees.

“We are going to build a pool and amenity center,” Taylor said. “Originally, we were going to have it just for Westlake Hills residents, but we have decided to open it up for additional members if anybody would like to join.”

Taylor acknowledged that a significant concern among the neighbors has been vehicle traffic and connectivity to the rest of Crozet’s designated growth area.

The project will build a portion of the future Eastern Avenue that’s envisioned to connect Route 240, at the old Acme Visible facility, to the Cory Farms neighborhood on U.S. 250.

In the interim, access to Westlake Hills will be via the existing West Hall neighborhood.

“I am hopeful that will only last about a year,” Taylor said.

Vienna Romesburg is a West Hall resident who has closely followed the development.

With the completion of future phases of the development, and Taylor’s nearby Foothill Crossing, a second road connection will be opened via Western Ridge on Route 240. However, future segments of Eastern Avenue are not expected to be built soon as they involve other property owners and expensive bridges.

“I understand the concern about Eastern Avenue not being finished and the concern about the construction traffic,” said Western Ridge’s Loman. “But even when the connection is made to [Route] 240, it’s still not going to solve Crozet’s traffic problems. The developer does deserve credit for building their portion of the road.”

Taylor said he wants to break ground on Westlake Hills in the beginning of 2013. Albemarle County is currently reviewing the preliminary subdivision design and, as a by-right development, it does not require a rezoning.