What are the hottest Charlottesville neighborhoods? The city is creating a heat map that could inform climate policies for years 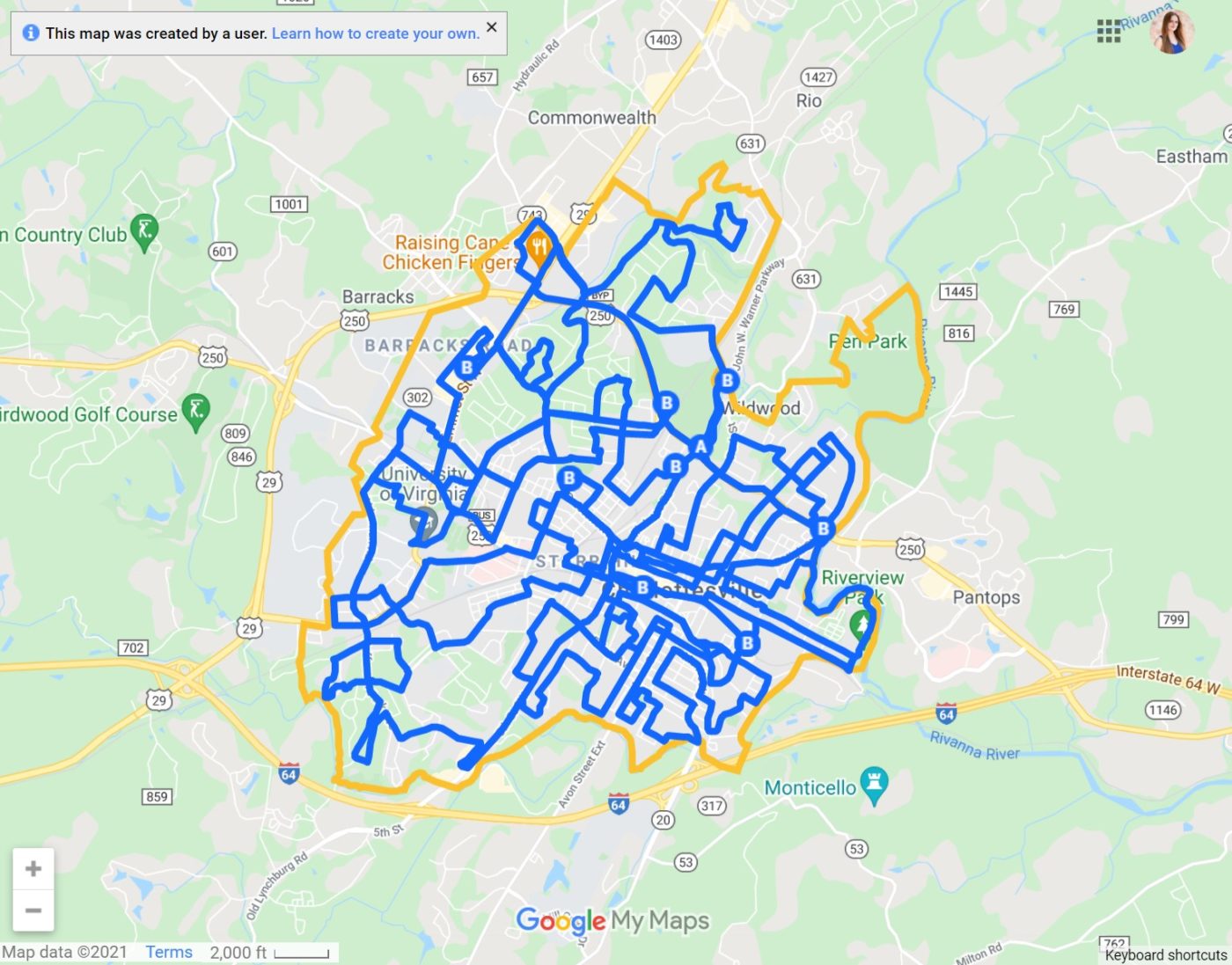 Local government is collecting temperature data from around the city that will show what many people already know — some areas of town are hotter than others.

On Aug. 24, local volunteers drove or biked around designated routes in Charlottesville with devices to capture heat and humidity data.

The collected data could help confirm what locals have noted anecdotally regarding which areas of Charlottesville feel the hottest, said Susan Elliott, the climate program manager for Charlottesville.

Previous related data collection has shown that those are  10th & Page, Jefferson Park Avenue, and Ridge Street — neighborhoods between downtown and the University of Virginia composed of a mix of renters and homeowners, many of whom have lower incomes.

“It’s not necessarily surprising that areas with fewer trees and a higher concentration of concrete are hotter,” Elliott said

She adds that as concrete or pavement “absorbs more heat in the daytime. It also means at night, those pavements are still radiating that heat back out.”

“As we are looking at air conditioning and climate change progressions with projections related to heat, our average temperature is going up,” Elliott explained.  “At night the ambient cool temperature is also going to be higher than what we are used to historically.”

The collected data will be helpful for Charlottesville’s goals to reduce its greenhouse gas emissions.

The city plans to make the collected heat map data publicly available and officials hope it will inform which areas of the city are already most impacted by climate change. This will be particularly useful as the city develops its new Climate Action Plan, a document that may guide future development.

Additionally, the data can be incorporated into a climate justice map that the University of Virginia’s Equity Center is creating.

The volunteer-based campaign is part of a larger campaign through the National Integrated Heat Health Information System, CAPA Strategies and the National Oceanic and Atmospheric Administration. Charlottesville is one of 13 localities participating in the 2021 cohort along other cities in the United States.

Its results can become part of a growing number of studies and reports in the area that indicate what areas of the city are hottest or more susceptible to climate change.

Analysis by Climate Central, a scientific nonprofit organization, shows that many U.S. cities are experiencing more summer days with temperatures above 90 degrees Fahrenheit within the past 40 years. Charlottesville is no exception.

Additionally, a local report last summer from Community Climate Collaborative indicated where Charlottesville’s “energy burdens” were. An energy burden is the percentage of a household’s income that goes towards energy costs. Factors can range from infrastructure of the home — like a less energy-efficient structure — to urban planning and tree placement.

Energy burdened areas can also lie within “heat islands,” or areas that are pockets of heat. According to the Environmental Protection Agency, causes can include reduced greenspace in urban areas, the impact of greenhouse gas emissions, a higher concentration of impervious surfaces along with dimensions and spacing of buildings within cities. 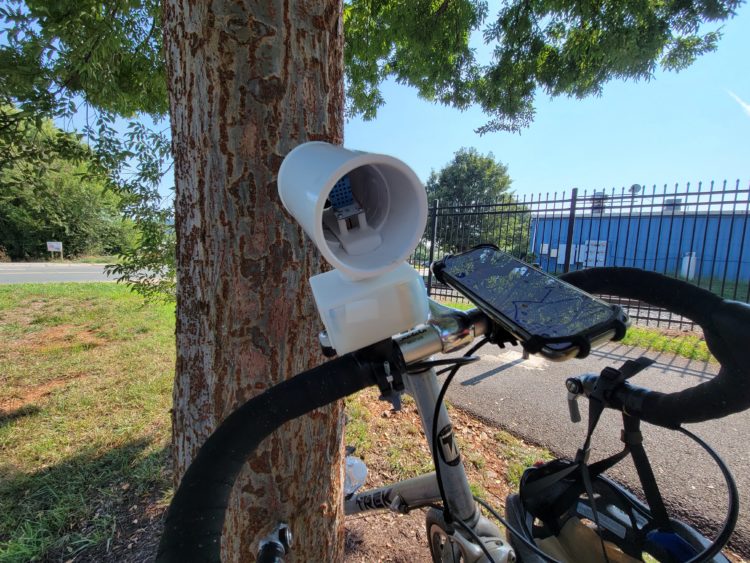 For volunteer Dave Opper, who rode his bike along a route with a mounted sensor to collect data, his participation in the cohort was inspired by his “concern about climate change.”

“I also like to ride my bike anyways,” he added after catching his breath and cooling down under a tree at the intersection of Meade Avenue and Carlton Road on Tuesday afternoon.

Of his experience riding his bike through town, he noted the difference in temperatures he experienced. His route wove through downtown, the Belmont, and Woolen Mills neighborhoods along with near the Rivanna Trail in the Pantops area where the city meets the county. Opper says the areas with fewer trees factored into his comfort levels.

While some parts of Charlottesville experience lower temperatures, more greenspace and less impervious surfaces, other areas experience more heat in summer months due to various infrastructure and urban planning factors.

Additionally, Elliott notes Charlottesville’s development history and racial history as connections to some of the neighborhoods she suspects may be the hottest.

She points to redlining — the historic practice of excluding home sales based on race — along with neighborhoods that have smaller plots of land or less investment in tree planting, as contributing factors to heat islands.

A 2020 study published and co-authored by Jeremy Hoffman, a scientist at the Science Museum of Virginia, examined the role that housing policies have played over time.

The study focused on the heat island effect, where urban areas with fewer permeable surfaces and greenspace retain hotter ground temperatures than suburban and rural areas. In examining cities across the U.S., it found that areas that were formerly redlined show higher temperatures. Redlining is the historical practice of denying mortgages or loans for racially biased reasons and has contributed to less homeownership and generational wealth building of racial minorities.

“When you get to more historically white areas, you see more street trees and bigger yards,” Elliott said. “Given the other things I’m aware of, it’s not surprising there’s that correlation.”

As the city is in the midst of updating its comprehensive plan, implementing an affordable housing strategy and conducting a zoning rewrite, Charlottesville is also undergoing the development of a Climate Action Plan, where equity is a goal along with environmental stewardship.

This data collection campaign is the latest step in the process of climate action strategies and planning.

According to Elliott, Charlottesville hopes to release a greenhouse gas emissions reduction plan sometime within the next year.

But, sooner than that, the city is collaborating with the nonprofit organization Local Governments for Sustainability to host virtual community meetings by the end of September to begin work on assessing what Charlottesville’s greatest climate change vulnerabilities are. Previously, Charlottesville has worked with the organization on a training program to learn about carbon capture.

This, Elliott says, will be a great starting point for determining what the highest priorities could be within the Climate Action Plan.