What could happen to Charlottesville’s Confederate monuments? Here’s where 29 others in Virginia ended up. 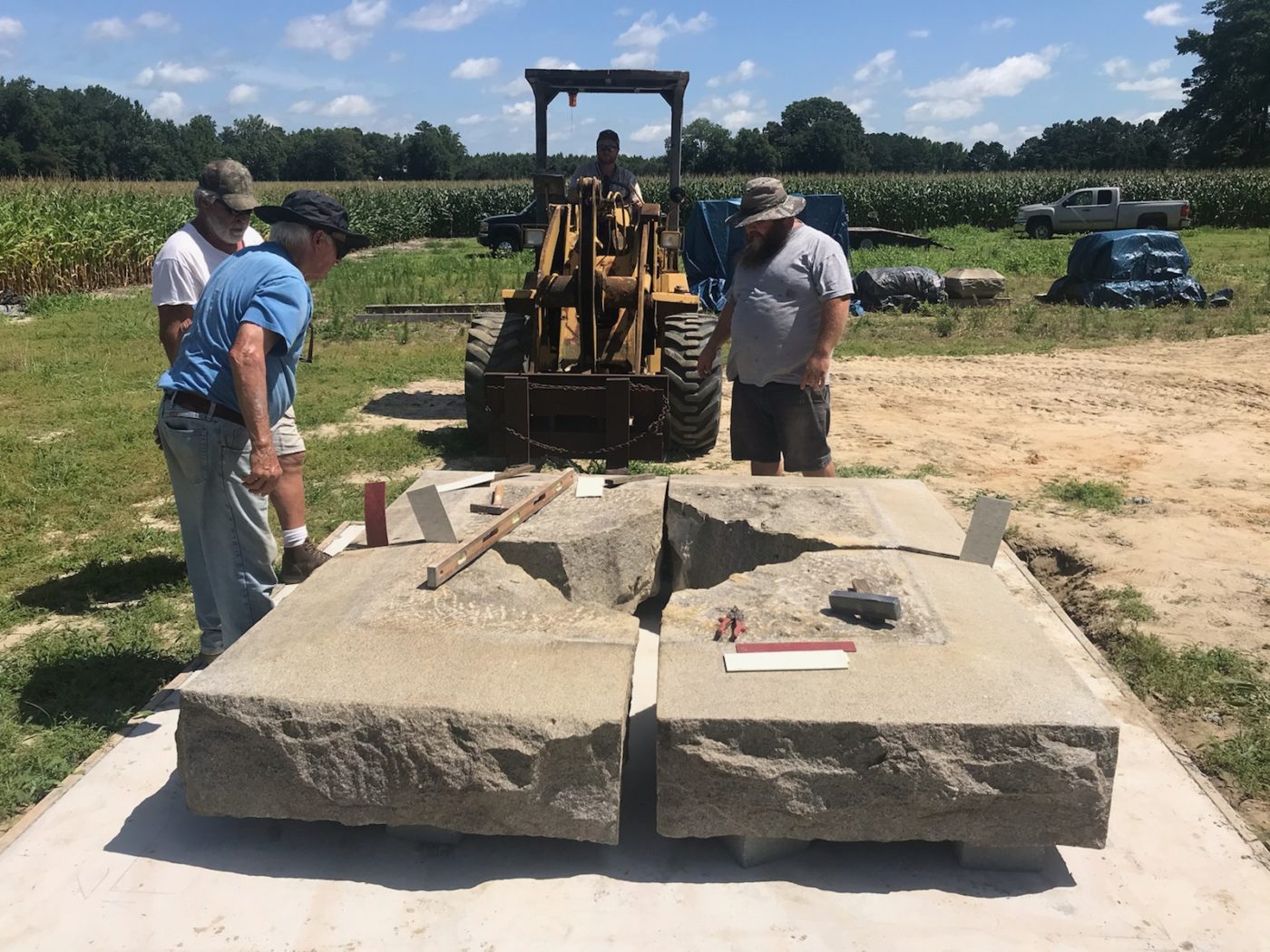 Volpe Boykin works to reassemble the Confederate monument he now possesses following Isle of Wight County's efforts to relocate it from a public courthouse.

Surrounded by cornfields on a small piece of private land in southeastern Virginia, a group of men are erecting a familiar-looking statue.

At its base is a stone that reads “Confederate Dead.” At the top, a Confederate soldier.

The monument was moved to this site in May from the Isle of Wight County Courthouse lawn, where it had stood for nearly 120 years.

It’s a similar story about 40 miles to the north. In rural Surry County, a Confederate statue that once stood before the courthouse is being re-erected on private property. It will be visible from a nearby highway.

For now, these are the only two statues in the state that Charlottesville Tomorrow was able to confirm were being rededicated on private land. But that could change.

Most of the Confederate monuments that were removed from publicly owned space in the last year have undecided futures. Local governments are simply storing them while officials grapple with what to do.

“I think here in Charlottesville, and I imagine across Virginia and the country, a lot of localities are just struggling to work through that process,” said Charlottesville City Councilor Michael Payne. 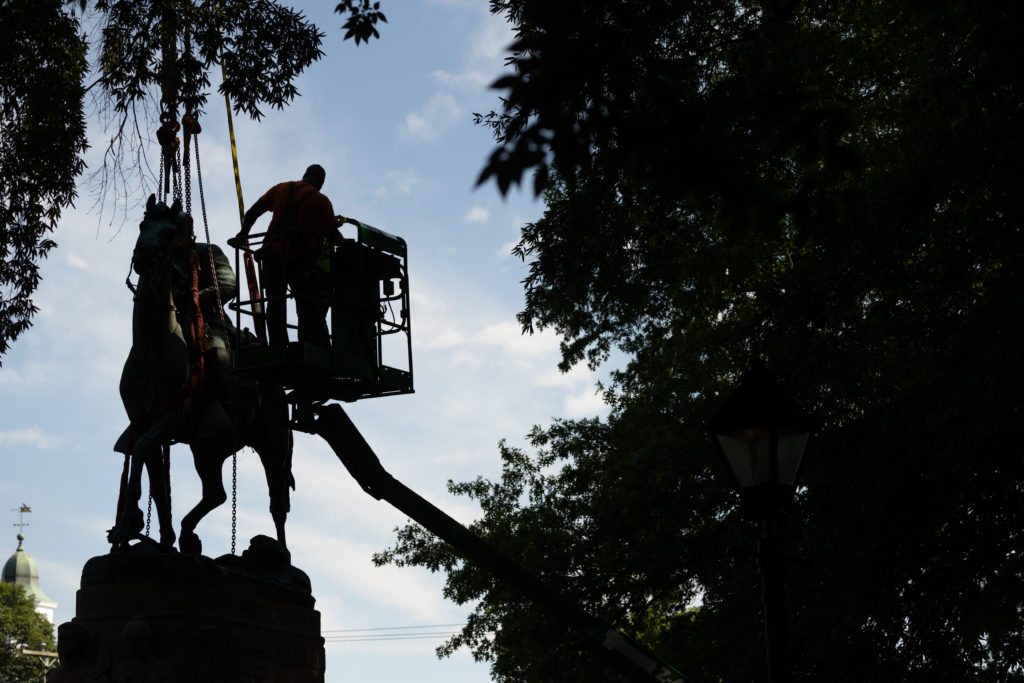 On Saturday, crews hauled Charlottesville’s two Confederate monuments out of the city’s downtown parks to an undisclosed location. There they will remain until the council decides their fate.

That could take a long time, Payne and other council members have said.

There’s precedent to that prediction. Richmond has stored nine Confederate statues removed from Monument Avenue for more than a year. City officials appear no closer to deciding where they should go. Virginia Beach, Portsmouth and Farmville also have stored monuments for about a year.

In some cases, the issue is officials can’t decide where the monuments should go.

The new state law that gives localities the right to remove Confederate memorials requires they collect proposals from people and organizations interested in taking ownership of them. But they aren’t required to give it to one.

Virginia Beach, for example, received two proposals from groups interested in taking its monument. Neither seemed a good fit. One, councilors felt, was too far away. The other demanded the city continue to pay for the statue’s upkeep. Forever.

In other localities, governments are storing their monuments because they can find no one willing to take them.

It was this general lack of interest that prompted both Isle of Wight and Surry counties to give the statues away to be displayed on private land, officials in both localities said.

Before giving it to Isle of Wight resident Volpe Boykin, the county assembled a task force—which included Boykin— to determine the best place to relocate its statue. The task force’s top choice was a publicly-owned cemetery in the town of Windsor — a tiny community of fewer than 3,000 people within Isle of Wight County.

The monument was too big for the cemetery, said Glyn Willis, mayor of the Windsor Town Council. What’s more, the council didn’t want to “take on the liability and responsibility” of it.

Boykin was the next option. 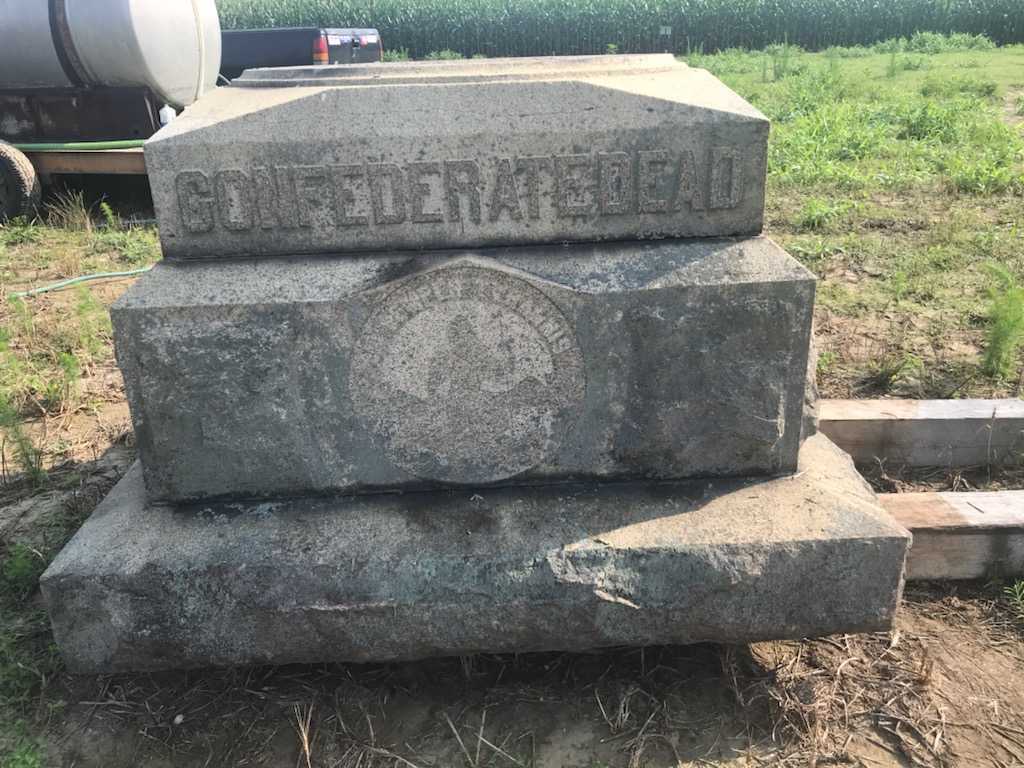 The base of the old Isle of Wight Confederate statue sits on Volpe Boykin's property.

It was the “best decision at the time,” said Isle of Wight Supervisor Don Rosie, who added that he would have preferred recontextualizing the statue where it sat on the courthouse lawn.

“The value of [Boykin’s property] was the fact that it was out of local government property, because a lot of folks felt that was a necessary component,” he said. “The second thing was that on a private piece of property, it could not be destroyed and perhaps [be] better managed.”

Surry’s Board of Supervisors encountered a similar situation.

“We reached out to groups, historical associations, cemeteries with Confederate deceased in it. Quite frankly, nobody wanted it,” said Michael Drewry, a member of the Surry Board of Supervisors. “They were just like, we don’t want this to cause any controversy or give anyone reason to come on our property and vandalize it. So, at that point in time, I was quite concerned whether we were going to find a home for it.”

The county did eventually receive a proposal. It was from the local chapter of the Sons of Confederate Veterans.

Confederate groups have turned out in droves to claim removed monuments.

The Sons of Confederate Veterans and United Daughters of the Confederacy are the most recognizable names. But some activists have even accused other historical organizations that have received statues of having Confederate leanings.

The United Daughters of the Confederacy have taken three monuments from Virginia localities — in some cases claiming that they own them. The group paid to install many in the early 1900s.

In Alexandria, for example, the local Daughters of the Confederacy chapter notified city officials of its intent to reclaim a statue that had stood in a prominent intersection in Old Town for more than a century. It was gone the next day.

Group leaders have not said what they intend to do with the statues, and they did not respond to Charlottesville Tomorrow’s request for comments.

The statue that went to the Sons of Confederate Veterans is easier to track. The Surry County group made a formal proposal for the statue, which included its plan for it. The group says it intends for the statue to be a memorial to dead soldiers.

The agreement it signed with the county promised that the statue would be dedicated to “all county citizens who served or sacrificed in the War Between the States during 1861 – 1865.”

That’s the same intention as Boykin has for Isle of Wight’s monument.

“Saving the monument to me is not honoring the Confederate government or their attempts to keep other people enslaved. It’s to dead soldiers who did their duty who weren’t necessarily asked their opinion,” said Boykin, who is a member of the Sons of Confederate Veterans. “There wasn’t no stay-at-home option.”

While it was in front of the Isle of Wight County Courthouse, Boykin said, the statue functioned as a collective tombstone to honor dead Confederate soldiers.

As a child, he recalls his grandmother pointing to the statue and explaining how families of fallen soldiers would visit it to place flowers “like you would in a cemetery,” because “a lot of these soldiers were just gone, they didn’t have graves.”

Some historians and activists who support removing Confederate monuments from public view argue that many were erected in the early 1900s in connection to the era of Jim Crow laws. Isle of Wight’s statue went up in 1905.

Boykin plans to place the land his monument sits on under an easement to allow for public viewing, establish a historical association connected to the monument and then control who visits — and why.

“As a monument to dead soldiers, it needs to be treated with respect for what it is,” Boykin said. “So basically, if it wouldn’t be allowed in a cemetery, it won’t be allowed at the monument.”

‘A reasonable place to go’

While Boykin is treating his statue like a cemetery, other monuments are actually being reerected in them. 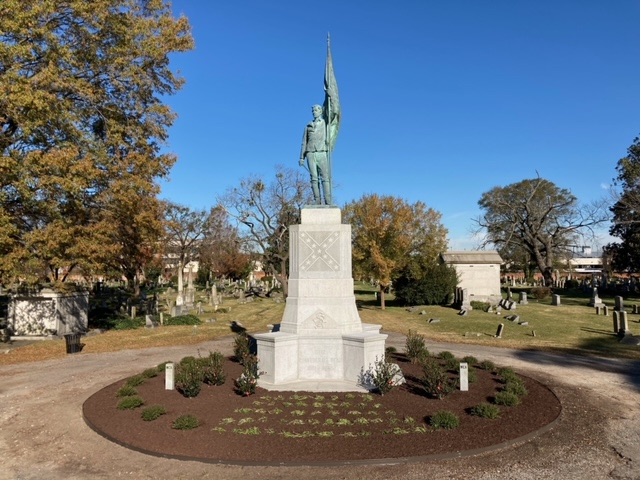 A Confederate monument that once stood in downtown Norfolk in its new location in Elmwood Cemetery.

Credit: Photo courtesy of the city of Norfolk

Behind government storage and possibly tied with Confederate groups, cemeteries are the next most common location for removed Confederate statues.

For the localities that chose cemeteries, the monuments tended to relocate with little fanfare.

Caroline and Greensville counties, along with the cities of Norfolk and Richmond, have all sent their statues to rest alongside the graves of Confederate soldiers. The Farmville Town Council intends to do the same, if crews can find a suitable piece of land in the cemetery that’s the right size and has no bodies buried beneath.

“It seemed like a reasonable place for it to go,” said Joe Cobb, a member of the Roanoke City Council. “We have some Confederate dead buried in the cemetery, so we placed it near the Confederate dead.”

Perhaps the least common relocation site for Virginia’s Confederate monuments thus far has been historical organizations. A handful of localities have elected to send their statues to such organizations.

Nearby Albemarle County, for example, in September gave its “Johnny Reb” statue to the Shenandoah Valley Battlefields Foundation. Since taking the monument, the foundation has yet to reerect it in its intended new home.

According to Jack Owens, an associate who works in the foundation’s Third Winchester Battlefield Park — where Albemarle’s former Confederate monument was slated to go — the statue is still in storage.

Charlottesville Tomorrow reached out to the organization’s executive director, Keven Walker, multiple times and visited Shenandoah Valley’s battlefields to learn more about the plans for the statue, also known as “At Ready,” and he has yet to respond at the time of this publication. 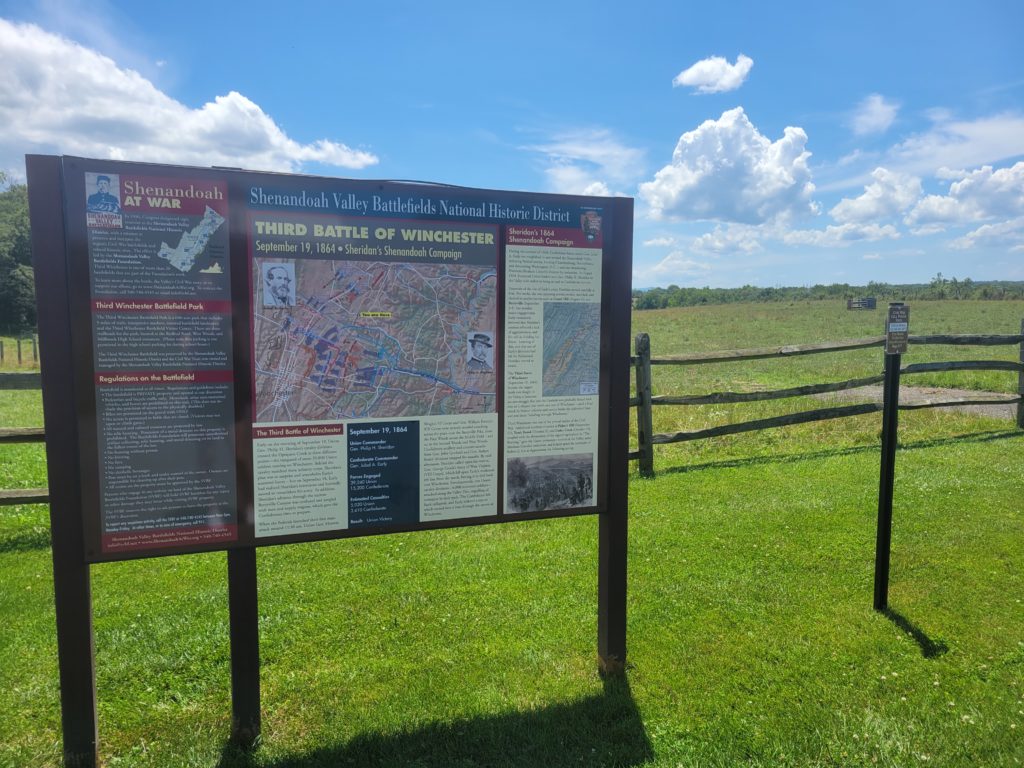 Third Winchester Battlefield Park, part of the Shenandoah Valley Battlefields Foundation, is home to several Civil War battles, and is expected to become home to Albemarle County's former Johnny Reb statue that it gave to SVBF in September 2020.

According to Brittney Hebermel, an executive assistant, Walker has been at a board retreat where the Johnny Reb statue is among the things being discussed.

The foundation maintains a collection of battlefields and other historic sites spanning eight localities in the Shenandoah Valley from Augusta County to areas toward New Market and Winchester. The sites are preserved through a federal grant administered by the National Park Service.

Home to several historic sites from the Civil War, references to battles or significant figures scatter the area. During the war, the contested valley was known as “the Breadbasket of the Confederacy.”

SVBF headquarters in New Market also houses a coffee shop called Jackson’s Corner Cafe, named for the Confederate general, and a street named for Lee is nearby.

While Albemarle county supervisors were pleased to select SVBF for its statue last summer, some Charlottesville area activists have expressed concern.

Historian and activist Jalane Schmidt noted a Bonnie Blue sticker on an SVBF truck that carted Albemarle’s statue away last summer — a symbol also present during the 2017 Unite the Right rally. During Charlottesville’s public hearings and votes to relocate its Confederate monuments, several community members cautioned against sending them to a place where they could still potentially lack context or continue to venerate the generals.

That is exactly what some Charlottesville City Council members say they hope to avoid.

“I think what’s really important for this community is to ensure these statues don’t end up in a location where they continue to tell and celebrate the narrative of the Lost Cause,” Councilor Payne said. “We don’t want them outside Charlottesville and still being celebrated.”

Click here for an interactive database of relocated Confederate monuments around Virginia.