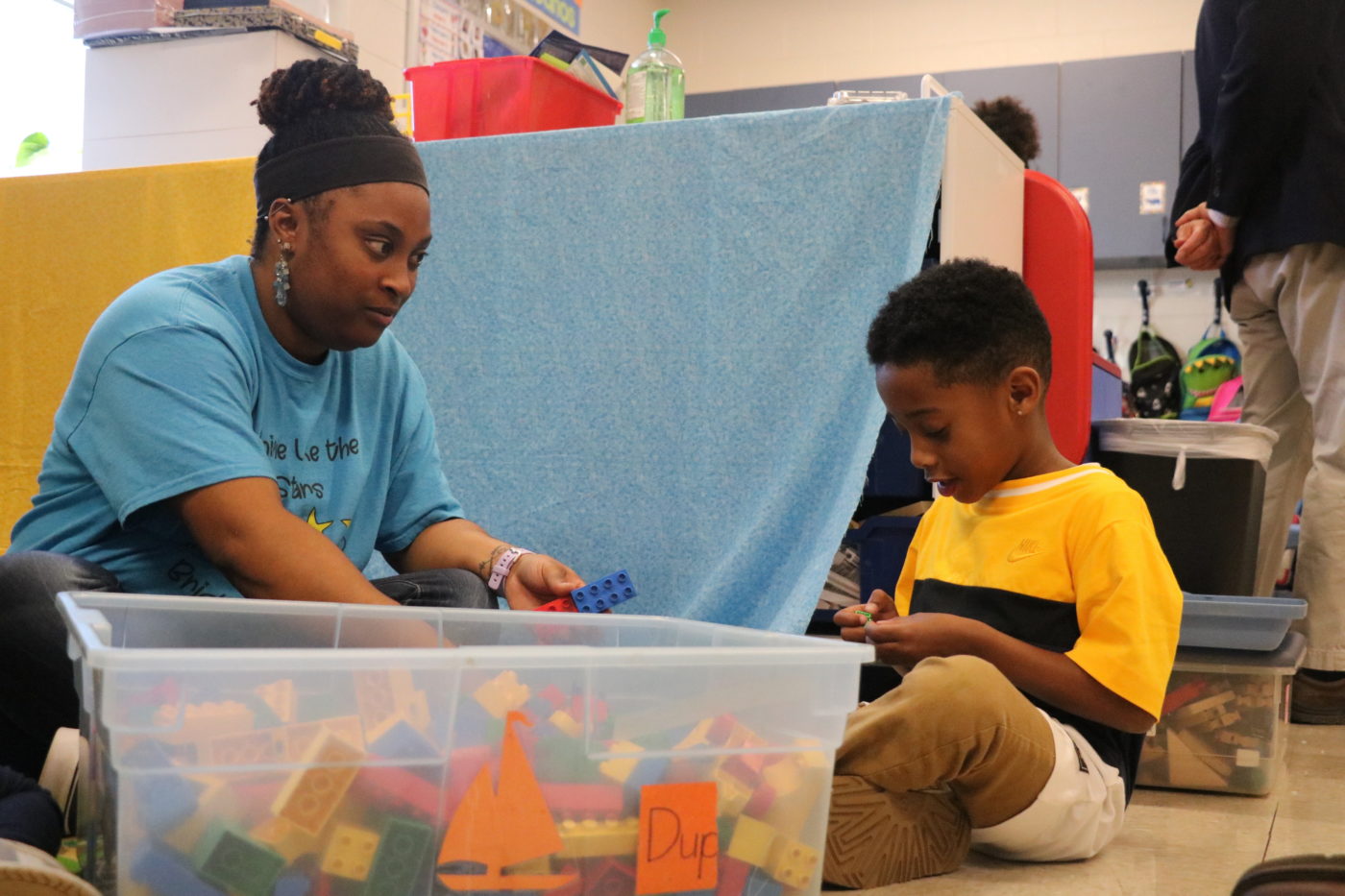 The second of an ongoing series on early childhood education.

What’s the state of early education in Charlottesville-Albemarle?

Iris Davis, a parent of a 5-year-old in Quaneilia “Shay” Carter-Shifflett’s preschool class, said she enjoys the diversity that the early education program at Woodbrook Elementary School offers.

“My child is learning Spanish and English,” Davis said, adding that the class also goes on field trips and works on family-oriented activities within the classroom.

Davis said her son, Jeremiah Moore, knows his colors and how to count in Spanish. She said he runs out of the door in the morning, and is “simply excited” to go to school.

Carter-Shifflett said another thing she’s teaching her students is organizational skills. Everything in her classroom at the Albemarle County school is labeled. She said she wants the students to be able to organize the toys and put them back where they belong.

Additionally, she said she augments their time to interact and play with each other by engaging with them.

“That way, we can support them and build friendships,” Carter-Shifflett said.

As preschool initiatives become more prevalent, there are statewide plans to create pilot programs to improve access to them for 3-year-olds.

While expanding access to early childhood education programs is important, early childhood experts also have argued that the quality of them also is important. Carter-Shifflett’s teaching method —  interacting with students while allowing them to play —  corroborates what experts said is essential for high-quality programs.

While parents are considering a program, they should visit the classroom to watch the teacher-child interaction, said Kris Meyers, director of quality improvement for the Virginia Early Childhood Foundation.

Meyers said she wants parents to look at whether the teachers are talking to the children while they’re playing. The teachers also should use playing to reinforce learning concepts, like counting blocks or pointing out letters in the alphabet.

“We really want people to pay attention to those teacher-child interactions,” Meyers said.

Jennifer Slack, founder and leader of Our Neighborhood Child Development Center in Charlottesville, said 90% of a child’s brain development occurs before 5. Slack also agrees the best quality to a preschool center is teacher-child interaction. 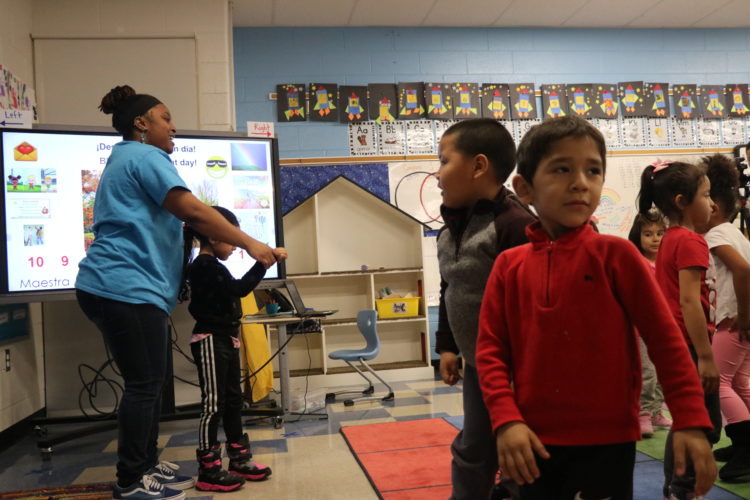 The teachers should build relationships with children because the learning process is seamless when children feel connected with the provider, Slack said.

“We want to make sure that the teacher is talking with the children, so that there’s a joint attention going back and forth,” as opposed to talking to the children and giving directions, she said.

Additionally, the classrooms should give students choices, Meyers said. And that’s because children at this age are learning many things and are trying out new skills.

“We want there to be a variety of types of play material for them so that they can explore ― everything from puzzles and counting materials,” she said.

We want to make sure that the teacher is talking with the children, so that there's a joint attention going back and forth.

Other examples include allowing children to have access to dramatic play; dress-up clothes; and a pretend kitchen, grocery store and doctor’s office.

“We want them to look for materials that reinforce science and nature,” Meyers said.

Meyers added that early childhood preschool teachers should reinforce early reading and math skills, as well as have the students talk about what they learn and why they create something.

“We want to look for art material, so that the children have an opportunity to draw, paint and be creative on their own,” Meyers said, adding that an environment that promotes music and movement is also imperative.

Having preschool available makes children ready for the next stage: kindergarten, said Davis, the Woodbrook parent. She added that it’s helping children academically and socially to learn how to speak, interact and deal with conflict they’re experiencing with their peers.

“It’s doing so much greatness since he’s been here — he’s grown so far,” Davis said.

She also lauded the teachers for going to her home to meet her before school started to see what her home atmosphere was like. The purpose of the meeting was for the school to see what she was looking for in her son’s education, she said.

“That makes me feel good,” Davis said. “I actually cried tears of joy because, growing up in New Jersey myself, I never had that type of experience, nor did my parents.”

She said the teachers showed her that they care about her son and want her son to learn.

“It’s not just a job, and it shows in their actions,” she said. “It’s family-oriented.”

Even the process to get her son enrolled was seamless, Davis said.

Space, funding and quality are among challenges that pummel early childhood education. The public sector lacks enough space to serve all children, experts have argued, thus these parents are referred to the private sector.

They have the resources to pay thousands of dollars a year, while lower-income families do not have the same opportunities.

But those who are able to afford high-quality preschools mostly are affluent. Nearly 55% of high-income families can afford preschools for 3- or 4-year-olds. Only 36% of low-income families can, said Emily Griffey, policy director of Voices for Virginia’s Children, during a January interview.

“They have the resources to pay thousands of dollars a year, while lower-income families do not have the same opportunities,” Griffey said.

Carter-Shifflett said that for many of her students, this is their first time leaving their home to be in a school setting. In response, she teaches them problem-solving, like building them up to be independent. They’ve been collecting acts of kindness, she said, whether it’s using words or giving hugs to lift each other up.

“The school is beautiful. I hope that I’m getting the impact that this is providing to our family because my son is coming home with not only excitement. He has friends,” Davis said.

Every moment is a learning opportunity, Carter-Shifflett said. Her students pretend to be meteorologists, for example, measuring how much rain that occurs in a couple of days and then organize the data.

Carter-Shifflett said she incorporates Spanish in the curriculum because there’s a great number of Latino students.

“It’s important for kids to have a piece of them here,” she said. “… [We’re] letting them know that we value their culture, as well.”

But while the teacher-child interactions are important, the interactions cannot happen if the teachers are making low-wages and the maximum ratios are being used, said Slack, of Charlottesville’s Our Neighborhood Child Development Center.

“There are huge equity issues,” she said.

The private sector serves the majority of preschool-age children, Slack said, and the rest is being taken care of in tuition-based programs.

“In a tuition-based program, the more money you have, the better the care you can afford,” Slack said. “The quality of care that people can afford to pay is pretty low.”

Charlottesville Tomorrow will explore the inequities in early childhood education in the next part of this series. 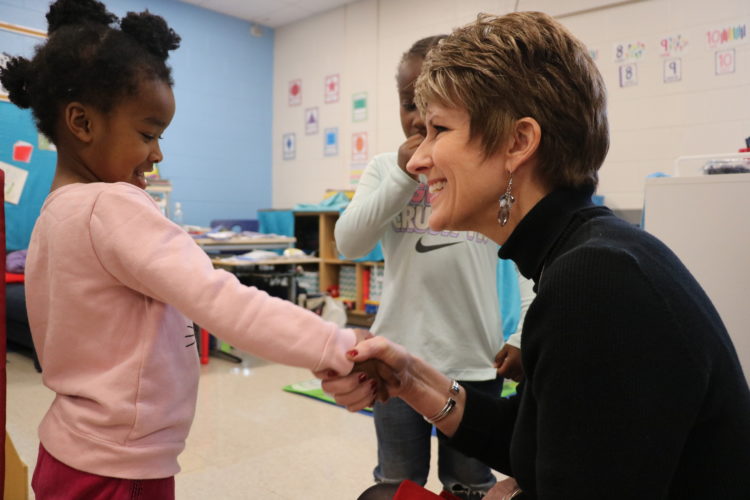 Space, funding and quality are among challenges that pummel early childhood education. The public sector lacks enough space to serve all children, experts have argued, thus these parents are referred to the private sector.