What does the Black birth experience in Charlottesville look like? A new photo series shows how powerful it can be. 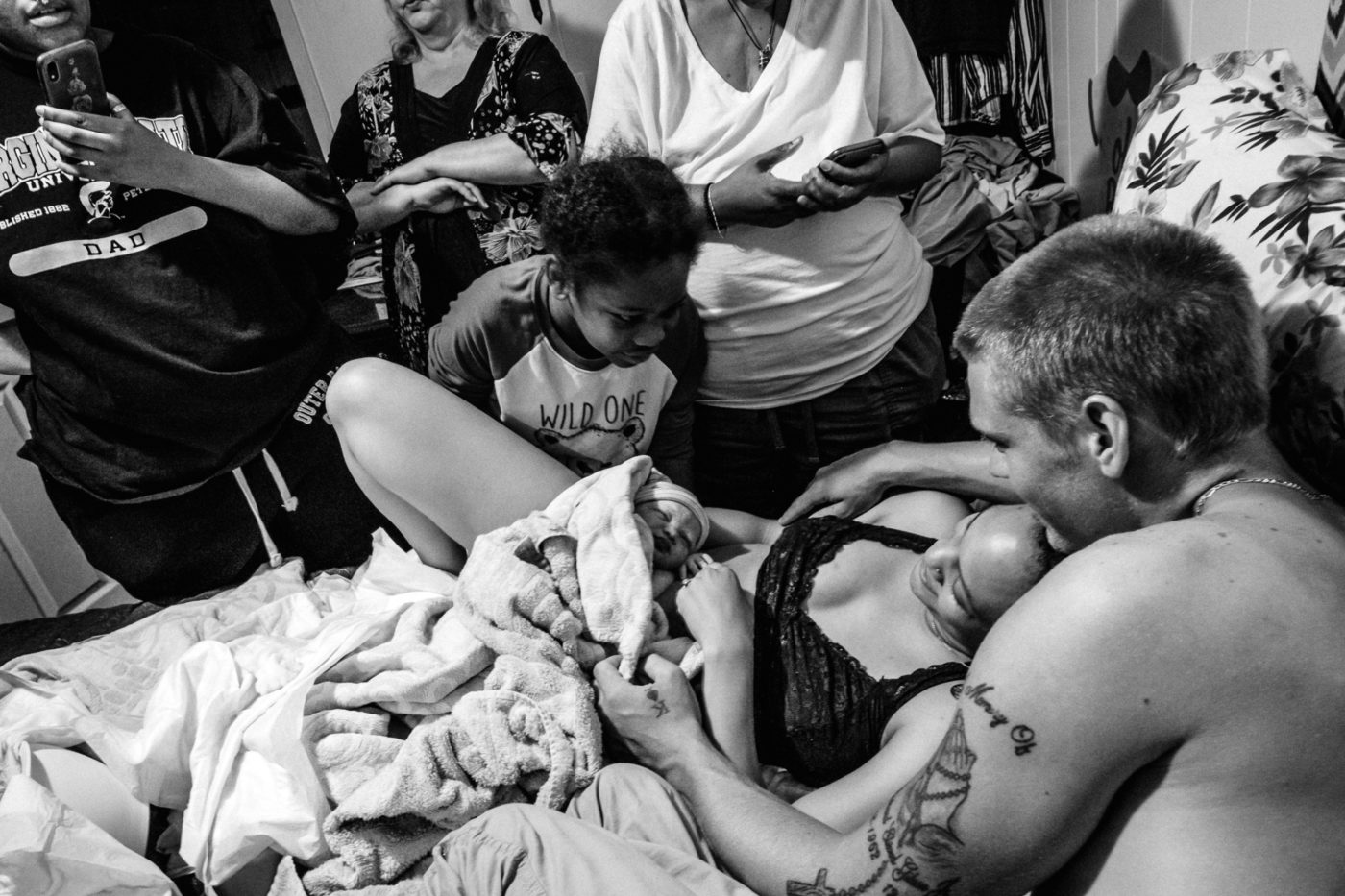 Michaela Banks and her family welcomed a new addition to their family on July 11, 2021 at her home. She was photographed as part of a documentary series by photographer and doula Benita Mayo about the Black birth experience. “At 3:30 a.m., with the loudest, sharpest, most intense shriek I’ve ever heard, Michaela birthed her daughter. There was nothing left to do but to be present,” said Mayo.

Michaela Banks never thought she would have to convince her medical team at a Charlottesville hospital that she was close to giving birth.

She told the medical staff that her baby was beginning to crown, but said they insisted she was only three centimeters. She pressed again, so the nurses checked. She was eight centimeters and it was too late for pain medication.

“They were talking to me like I was just really beneath them,” said Banks. “They didn’t believe a word I was saying.”

Banks experienced what many Black mothers know: they face greater adversity in their pregnancies than any other racial group in the country. Data from health agencies show that being pregnant and giving birth to a child doesn’t go as well for people of color, especially Black people, as they do for those who are white.

“That’s the piece that is really getting a lot of attention is how Black women are encountering the health care system, and as a larger living in the United States, is adding to their stress,” Sampson said.

Birth Sisters of Charlottesville wants to help change the outcomes in our community.

Like other doulas, they help people through pregnancies and labor. But they call themselves “birth sisters” for a reason. They work in the community to improve birthing outcomes for marginalized people by lessening the harms of external stressors, such as discrimination or life events.

“I hope they can get programs like this all over because it meant everything to me,” said Banks. “It could have meant life or death for me and my kids but it meant a lot for me and my mental and physical health.”

Lisa Brown, a co-founder of Birth Sisters of Charlottesville, said getting help from people outside the family or health care system is often stigmatized.

“We are not always given the space as Black people to see this as a spiritual journey, or something that’s going to be impactful,” said Brown. “But once you’re in that moment — I know because I’m a mother myself — you realize, ‘I’m actually giving life.’”

Banks noticed a significant change when she gave birth to her fourth child in 2021. She sought out the services of Birth Sisters of Charlottesville and finally felt heard. This time, the doulas helped the health care team at the hospital follow Bank’s birth plan as much as possible. Banks felt like the staff was more attentive and careful than in her last experience.

“I felt safer, like [the doulas] knew what was good for me,” said Banks. “They made sure I was comfortable with the least amount of stress.”

In 2017, global health nonprofit Cochrane analyzed data from 26 studies of women giving birth around the world. The study found that women who were assisted by doulas or other forms of continuous support were more likely to have natural, shorter deliveries and less likely to use epidurals or other pain medications. According to a 2013 study of women with Medicaid coverage in Minnesota, almost all mothers who got care from a doula were able to begin breastfeeding their babies, too.

The cost for a birth doula, who visits before labor and assists during labor, can range from $500 to $2,000. The price tag increases if a mother decides to hire additional doulas, such as antepartum doulas to assist with difficult or high-risk pregnancies or a postpartum doula who aids the mother after their birth.

But more people in the Charlottesville area can now afford the service. Last year, Virginia became the fourth state in the nation to commit to providing Medicaid benefits for doulas. Birth Sisters also offers rates on a sliding scale for mothers who have other insurance plans and income levels.

Maternal deaths rates have been on the rise in recent years, according to data from the Centers for Disease and Control Prevention released last month. Black women continue to have the highest maternal mortality rate of the racial and ethnic groups. 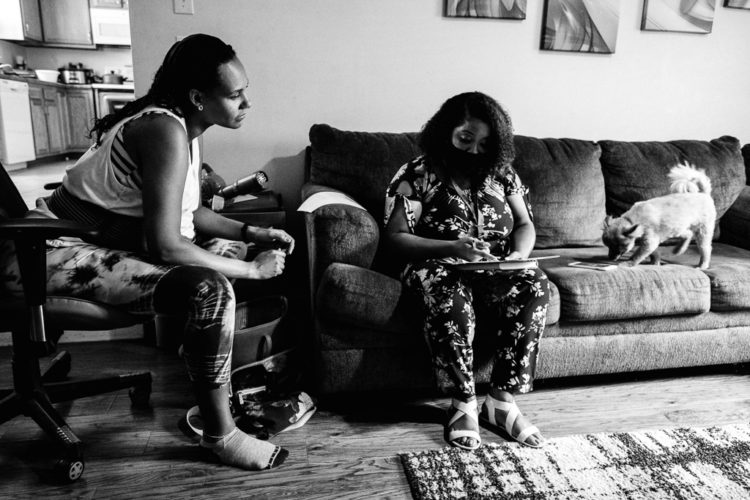 Seanna Leath, left, works with the Birth Sisters to create her birth plan on July 18, 2021. Everyone including the puppy was present. Leath planned on a hospital birth, but because of the COVID-19 pandemic, the hospital restricted how many people could be in the delivery room. Doula Tessa Thompson, right, was available by phone.

Banks and the Birth Sisters will be highlighted in a photo-documentary series created by Benita Mayo, a fellow at the University of Virginia’s Equity Center. The project, which received $5,000 in funding via UVA, focuses on doulas of color, including Mayo herself, and the mothers they serve.

The stories of Black women — including the one Serena Williams told after giving birth to her daughter Olympia in 2018 — moved Mayo to become a doula herself.

“I couldn’t believe that [Black women] had trouble within the medical field,” said Mayo. “I mean, they have money, they have agency, they’re smart — yet the doctors were not listening to them when they had their children.”

Months after Birth Sisters of Charlottesville started in 2020, Mayo enrolled in the organization’s doula training sessions. She started taking pictures because she wanted people to know what doulas can do, and how powerful they can be.

“I think for all moms, but particularly Black moms, having a doula, that’s been something that shows better outcomes, lower C-section rates and better satisfaction with birth,” Sampson from the Blue Ridge Health District said.

“It’s sad to think that there are people who don’t have access to this because I know what they went through,” Banks said.

Mayo plans to exhibit her photos later this year. In the meantime, you can see more images on her website and visit her at Studio 23A at the McGuffey Art Center in Charlottesville. Here’s more about her fellowship at UVA.