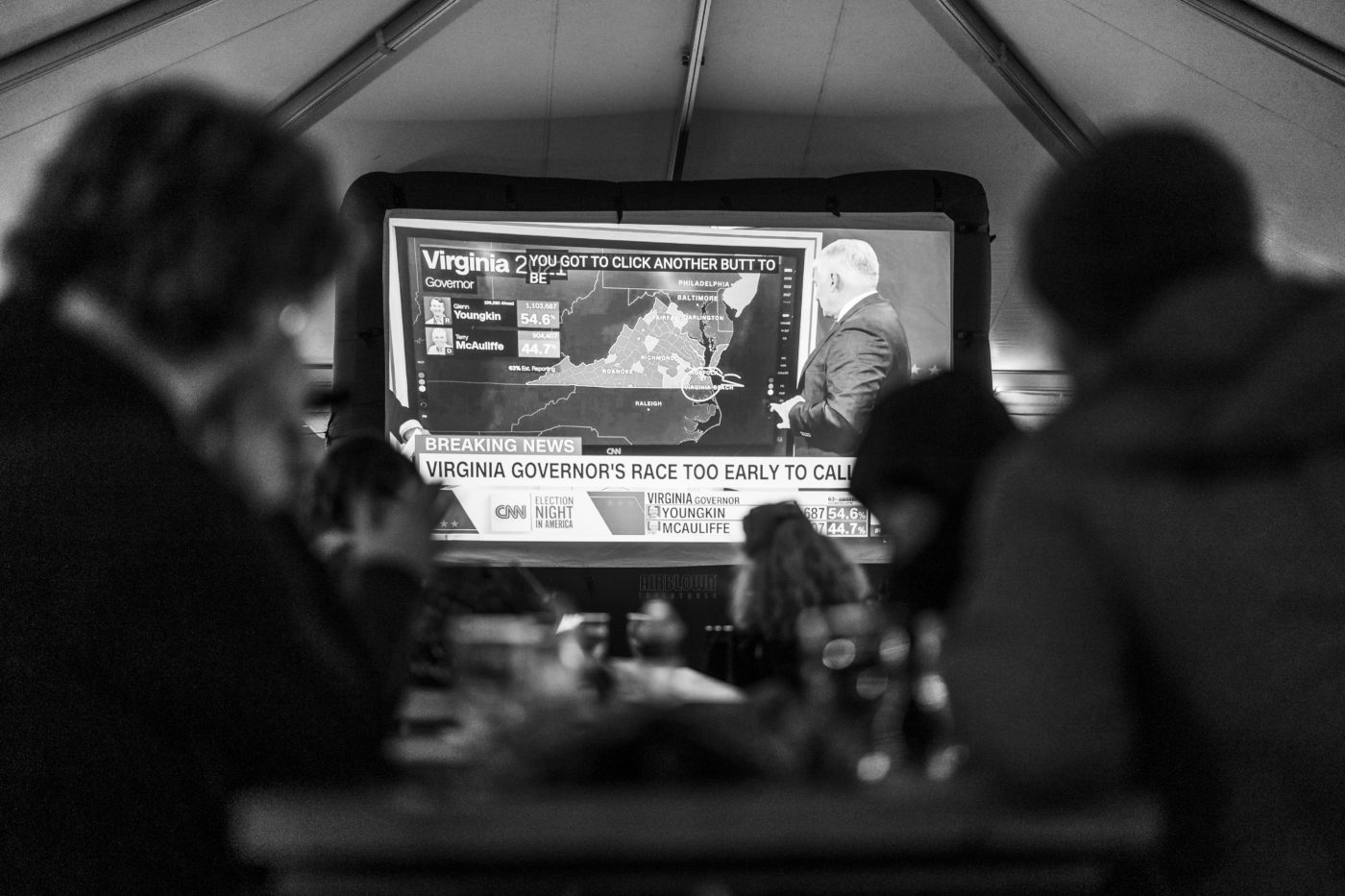 Albemarle County saw its highest turnout in almost 30 years, with 62% of registered voters headed to the polls. In the last governor’s race in 2017 saw a 56% turnout. Statewide, roughly 55% of registered voters cast a ballot this year, according to preliminary figures. That’s up from nearly 48% in 2017.

The immense turnout was driven largely by this year’s hotly contested governor’s race, political analysts say. In Albemarle, the governor’s race was undoubtedly a factor, but election experts and local Democratic Party leaders say there was more to it.

Charlottesville Democratic Party Chair Rebekah Saxon said the turnout is partially a result of the heavy focus from campaigners on the Albemarle suburbs. Voters in those districts tend to lean more purple than voters in Charlottesville, she said. That makes it so Democratic candidates in Albemarle are more at risk than their counterparts.

Nearly 79% of Albemarle County’s electorate voted Democrat last week, versus more than 84% of Charlottesville, according to the Virginia Public Access Project.

“[State candidates campaigning] may not have been in Albemarle County, but the messaging was geared way more to the Albemarle electorate than it was to the Charlottesville electorate,” Saxon said.

Albemarle County contains clusters of highly engaged voters that routinely show out at polls at higher rates than other voters in the state, according to Paul Freedman, associate professor of political science at the University of Virginia.

“Voters in the county may have been paying particular attention to this election, not only to the gubernatorial race at the top of the ticket, but to some of the local contests as well,” Freeman said.

Preliminary numbers show more than 31,000 residents voted in person last week in Albemarle County and almost 20,000 casted their ballots through absentee or early in-person voting leading up to Election Day. That’s around 9,000 more voters than the 42,367 who voted in 2017, the last governor’s election.

The registrar expected turnout to not exceed 60 percent of registered voters. It was 62%. That two percent may not seem like much, Washburne said, but it accounts for roughly 1,900 voters.

“I thought we covered ourselves by estimating a significantly higher turnout than I thought it was going to be, but it turned out to be the highest voter turnout for a governor’s election in 30 years,” Washburne said.

Washburne said nine out of the 31 precincts had to shell out replacement ballots. Emergency ballots were delivered by poll workers, and some sheriff deputies, to the precincts less than two hours shy of the 7 p.m. deadline, as previously reported by The Daily Progress.

“The most wait I heard from the [ballot workers] was between 20 and 25 minutes,” Washburne said. “Which is not a good thing, but apparently, almost everybody stuck around and was able to vote.”

Albemarle wasn’t the only locality to run out of ballots last week, it happened in at least six other counties.

Ease of early voting contributed to the higher level of turnout. Virginia was a No Excuse State up until 2017, meaning voters who wished to vote early through absentee ballots or in-person had to present an excuse. Gov. Ralph Northam signed a number of House and Senate bills into law in April 2020 that expanded access for voters to cast their ballots early with fewer requirements.

“Despite the Republican Party’s politicization of these reforms, they likely helped boost turnout for their candidate this time because easier ballot access should help everyone,” Reckendorf said.

Albemarle County is over 81% white, according to recent census data. Around 16% of the county voted Republican, according to VPAP.

Reckendorf said McAuliffe may have contributed to the high turnout for Republican voters. His campaign framed Youngkin as an extension of President Donald Trump and played a lot into the former president’s politics. Youngkin, Reckendorf believes, tapped into the emotion and anxieties of white identity politics — or views of white Americans who think their identity is most important — mixed with the exhaustion of the pandemic some conservatives carry reflected at the polls.

While Trumpism seemed like a way to sway voters away from Youngkin, in reality it brought out voters who were more loyal to the former president than the new Republican governor, Reckendorf said.

Virginia hasn’t seen such a turnout for a governor election since 1989, when over 66.5% of registered voters participated in a gubernatorial election leading to the election of the Democratic candidate Douglas Wilder. Virginia hasn’t elected a Republican governor since 2010.

Saxon, from the Charlottesville Democratic Party, believes the elevated energy of this year’s election will bleed into the future elections.