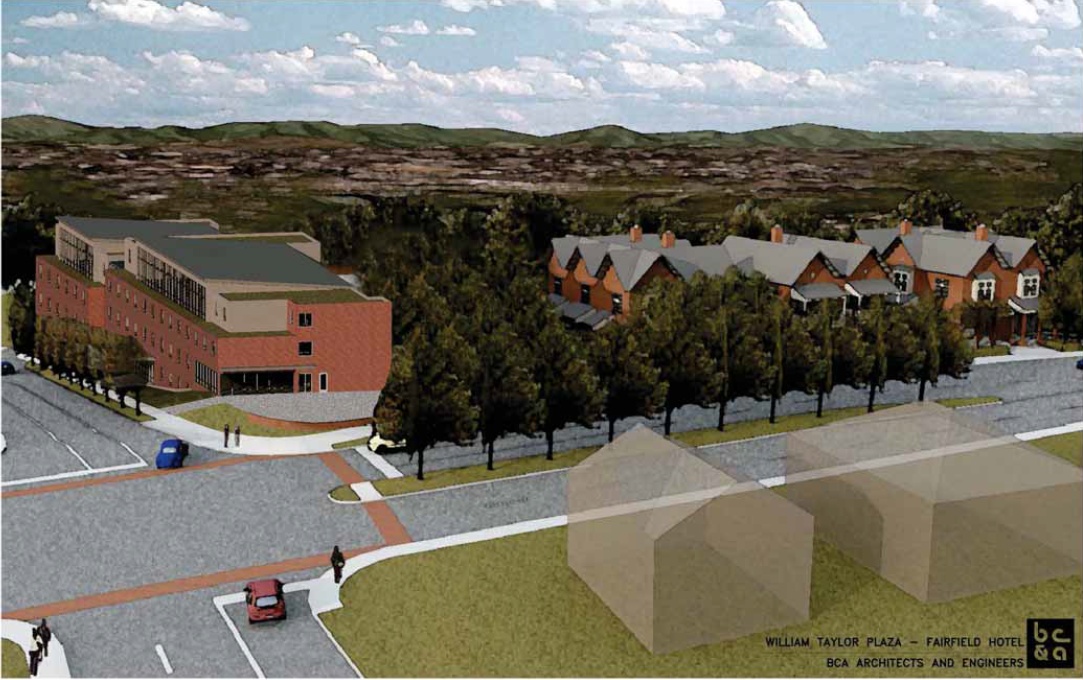 Looking west at a rendering of William Taylor Plaza

The Charlottesville City Council voted 3-2 Monday to amend a previous zoning for the William Taylor Plaza, a controversial mixed-used development at the corner of Ridge Street and Cherry Avenue.

“The council is not ignoring what the neighborhood wants but it can’t indulge the requests of a group of citizens to change the zoning on private property,” Galvin said.

Councilors Bob Fenwick and Dede Smith voted against the amendment.

“We can vote no, and that’s exactly what I’m going to do,” Smith said.

Several parcels were zoned as “planned unit development” by a previous council in November 2009.

Southern Development had asked to lower the required amount of structured parking from 90 percent to 60 percent to make the property more palatable to a potential occupant.

That business has been identified as Fairfield Inn, a Marriott brand.

The council was set to take action on the amendment at its meeting on July 6 but deferred action after City Attorney Craig Brown pointed out that approval that night could have caused a conflict related to the residential component of the development.

Southern Development has since submitted a more detailed plan of development to satisfy concerns of the majority of councilors who favor the project.

Language in the November 2009 rezoning states at the minimum, the project needed some residential units on its Ridge Street section.

Earlier this month Southern Development’s vice president, Charlie Armstrong, said his firm didn’t have to build any homes at all, but has since changed his tune.

“The biggest thing was clarifying that residential is required on Ridge Street, so there is now a minimum amount of 10 units,” Armstrong said.

Several other changes were made as well, including a clarification that all buildings on the site will be subject to review by the Board of Architectural Review. The project also must comply with the guidelines of the Strategic Investment Area Plan, a council-adopted plan for redevelopment of the area surrounding the Ix warehouse complex.

Southern Development also has agreed that no health clinics will be built on Ridge Street and no music halls can be operated on any of the property.

Some opponents of the project said they believed the new language submitted was enough to require a whole new review, including another recommendation by the Planning Commission.

The five members of the Planning Commission present at their May 12 meeting voted unanimously to recommend denial of the application.

However, city officials disagreed with a new recommendation.

“No information was added or removed to make the development plan less restrictive or more restrictive from what was presented to council,” said city planner Matt Alfele.

Several people called on the council to vote against the amendment.

Mary Carey expressed frustration that so many hotels are being constructed at this time and that one has remained unfinished for nearly six years.

Walt Heinecke said he was concerned that the process reflects on a failure of the democratic process in Charlottesville.

“[One] symptom is a 5-0 vote by the Planning Commission that is not being considered,” Heinecke said. “Another symptom is a petition by over 500 citizens which doesn’t seem to be getting any traction.”

Heinecke also asked councilors to disclose if they had received any campaign donations from Southern Development or political action committees such as the Monticello Business Alliance, a local committee funded largely by real estate development interests formed in 2003.

City Councilor Kathy Galvin said she was troubled that people who disagreed with her position were resorting to “character assassination.”

Galvin disclosed that she received $500 in funding from the Monticello Business Alliance this year. She received two payments of $500 in the 2011 election cycle, according to data collected by the Virginia Public Access Project.

Southern Development is a frequent donor to the organization but did not contribute in 2011 when Galvin won her first term. The firm has donated a total of $10,500 to the Monticello Business Alliance since VPAP began recording donations.

“The insinuation I have something to hide because I have been supported by a group that supports the free enterprise system is really quite breathtaking,” Galvin said.

Mayor Satyendra Huja received $1,000 from the PAC in 2011 but no donations in 2007 when he was first elected to the council.

Neither Szakos, Fenwick nor Smith have received any money from the Monticello Business Alliance.

The future of the neighborhood

The hotel will likely be the sole commercial use on the Cherry Avenue portion of the site, though Armstrong said there is an opportunity for a small retail space in the ground floor across from Tonsler Park.

Armstrong said there are no specific plans for the Ridge Street section.

“It’s phased so that the hotel could go first, but I think that once that this is solidified the rest of it will follow very quickly,” Armstrong said.

Armstrong said that Marriott is still on board with the project.

“They’re very committed to the site,” Armstrong said. “They’ve done their architecture and have been willing to work with the city’s desires to see what their building looks like on the site and how it interacts.”

Pete Armetta of the Ridge Street Neighborhood Association said in an interview that the vote could encourage an adversarial relationship between the neighborhood and city officials.

“I think that it will burn deep and wider than just in the neighborhood,” Armetta said. “We have the Flats at West Village referenced [in] this negative experience and I think this is next on the list.”

Armetta said his neighborhood feels empowered by the collection of more than 500 signatures against the project and will seek to influence the project as it makes its way through the BAR process.

However he said that many in the neighborhood are “demoralized” that a hotel will be built right near their homes.

Armetta said he believes Charlottesville residents need to have a conversation about what direction the city should go in and whether the appropriate infrastructure is in place to support growth.

“If it’s legal that a hotel can go there, then there’s not much that can be done,” Armetta said.

Armstrong met with neighbors Saturday at a meeting held by the Ridge Street Neighborhood Association. He anticipates there will continue to be public dialogue through the BAR process.

“There’s nothing final until it is built, so if people have constructive ideas I’m happy to talk with them,” Armstrong said.