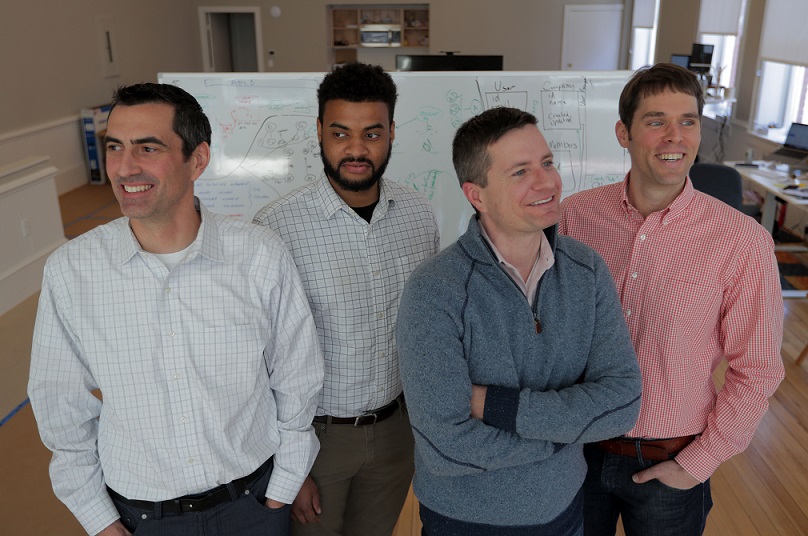 Michael Prichard is working on his second Charlottesville startup just a few blocks from the booming software business he co-founded eight years ago.

Prichard resigned as chief technology officer of WillowTree last fall. WillowTree develops mobile apps for high-profile clients such as American Express and Time-Warner, and has more than 170 employees at offices in Charlottesville, New York and Durham, North Carolina.

Although building a company from scratch can be risky, exhausting and even messy — he and his team of four employees assembled some IKEA furniture and spread paper over the wood floors to protect them from wet paint — Prichard said he relishes this early stage of the process.

“This is my favorite part,” he said. “It’s exciting to be part of a team that’s trying to solve a hard problem.”

“Metis Machine can bring sanity to the massive tide of data that is coming,” said Saul Yeaton, chief operating officer. “The amount of available data in the world is growing exponentially. It has gotten ridiculous, almost.”

Yeaton said that, at present, only large corporations have the resources to bring data science into their daily operations. Metis Machine aims to give much smaller firms access to state-of-the-art analytics.

The company’s analytics software is based on machine learning, which enables computers to search for relevant information and recognize patterns without being programmed to perform specific tasks. Machine learning is a critical component of software programs that identify credit card fraud, trade stocks automatically and pilot self-driving cars.

Prichard said the company — which takes its name from the Greek goddess of good counsel, planning, cunning and wisdom — will look for ways to use data from the “internet of things,” a rapidly growing network of wirelessly connected devices and sensors.

When Prichard and Tobias Dengel founded WillowTree in 2009, they anticipated a surge in demand for software for the iPhone and other mobile devices. Prichard said he believes the internet of things, and the data it produces, will drive an even more significant technological revolution.

“In our world, this is the next wave,” Prichard said. “This is the next thing that’s happening. There is a huge opportunity here, and we want to get it.”

Prichard said Metis Machine will find its niche by specializing in select industries, and by offering a simpler user experience than its rivals provide.

“We are trying to become the ‘easy button’ for data analytics,” he said. “We won’t scare people off with technical things. When you use Metis Machine, you won’t have to think about the data science.”

Yeaton said clients can interact with Metis Machine’s software through emails and text messages. “Most people don’t want to log in to another dashboard,” he said.

Metis Machine has sold $2.5 million in equity to two investors, according to a Securities and Exchange Commission filing in January. The company is testing its product with several undisclosed pilot customers.

Metis Machine analyzed records from the Centers for Medicaid and Medicare Services and the company’s own data to suggest which devices they should discuss with individual clients.

Prichard said hospitals could use Metis Machine to predict the future medical needs of their patients based on their prior treatments.

Metis Machine also plans to interpret data from machines in factory assembly lines to ensure they are well-maintained and in operation for as many hours as possible.

Yeaton said Metis Machine does not create comprehensive business strategies like a consulting firm does, but instead recommends simple actions that can help companies optimize their current operations.

“We want to help businesses improve things they are already doing,” Yeaton said.

Prichard said Metis Machine is “heavily influenced” by the work of WillowTree. He said he left the company on good terms, and remains close with his colleagues there.

“Michael is still a good friend of ours,” said Gregg Carrier, WillowTree’s COO. “A lot of us still see him on almost a daily basis.”

“It’s great to see more startups happening in Charlottesville, and we are excited to see what Michael does with Metis Machine,” Carrier said.