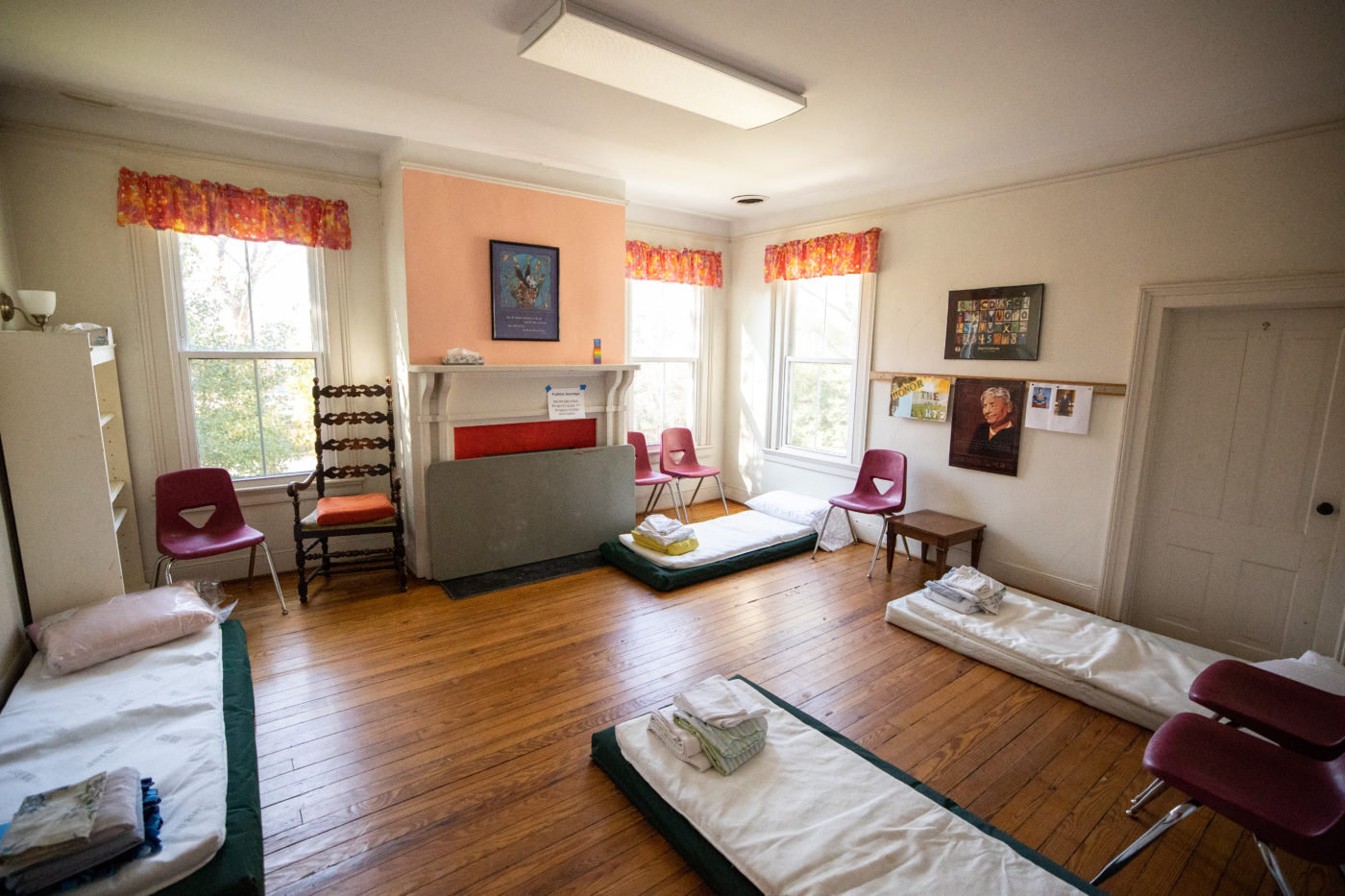 A room at one of PACEM's roaming congregate shelters stands ready for guests in early November.

Every year, a roaming homeless shelter opens for the winter months in the Charlottesville area.

The local group PACEM sets up temporary lodgings for a week or two at a time in various churches around the city and Albemarle County. In normal years, the shelter hosts dozens of people every night between November and March.

This is not a normal year.

“The pandemic has really affected our capacity,” said Jayson Whitehead, the executive director of PACEM.

In order to achieve sufficient distance between guests, the group has reduced its capacity from 45 to about 25 in its men’s shelter and 25 to about 10 for its women’s.

The reduction sounds drastic, Whitehead said. But it doesn’t necessarily mean people will be left on the streets.

Since shortly after the pandemic began, the Thomas Jefferson Area Coalition for the Homeless has placed people considered medically vulnerable to complications from COVID-19 — people who are elderly or have pre-existing conditions — in a local hotel.

There are currently around 70 homeless people in hotel rooms here through that program.

“Between the congregate shelter, all the hotel rooms and what the Salvation Army offers, we’ll actually have greater capacity,” Whitehead said.

What’s more, many of the homeless people now staying in area motels tend to be regulars at the PACEM shelters each year. These are area residents who are frequently homeless. That means that this year’s roaming congregate shelter will likely see more people who are “in and out” of homelessness, Whitehead said.

Each year, about two-thirds of the people who stay in PACEM’s congregate shelters either have never used the shelter before or have not used it in a number of years.

“When we talk about ‘the homeless,’ we’re talking about people on the lowest end of the economic scale,” Whitehead said. “These are folks that live in the margins, and it is very easy for them to lose their housing. They’re people who might be keeping it together by working three jobs, and if they lose one of them, they can’t pay rent and they’re homeless.”

Another common issue is people getting into fights with family members or roommates and being temporarily kicked out.

In either of these situations, the person often spends a week or two in shelter before finding another job or repairing the relationship with the roommate and getting their own housing again, Whitehead said.

Because of the intrinsically transient nature of homelessness, it is difficult to get exact numbers on how many people are experiencing it in Charlottesville. But, each January, the various homeless service organizations in the community cooperate to conduct a Point in Time count, where shelters report the number of people staying and organizations attempt to count the number of people living on the streets on a single day.

PACEM, an acronym for People and Congregations Engaged in Ministry, usually sees 200 or more people in its congregate shelter between November and March.

PACEM has made a few other changes because of the pandemic. In normal years, the shelter moves to a new church every week or two and simply buses people to and from it. This year, there’s no transportation, so the group has limited the churches to just those near downtown or directly off a bus line.

This means there are fewer churches, so the shelters will stay put for around four weeks before moving.

The locations for the shelter are not public, so anyone in need of it must call The Haven and be referred in, Whitehead said.

If you are experiencing homelessness and need a place to stay, that number is (434) 207-2328. It’s the “coordinated entry” line managed by the Haven. You’ll leave a message, which the Haven will pass along to the organization best suited to help, and that group will call you back.