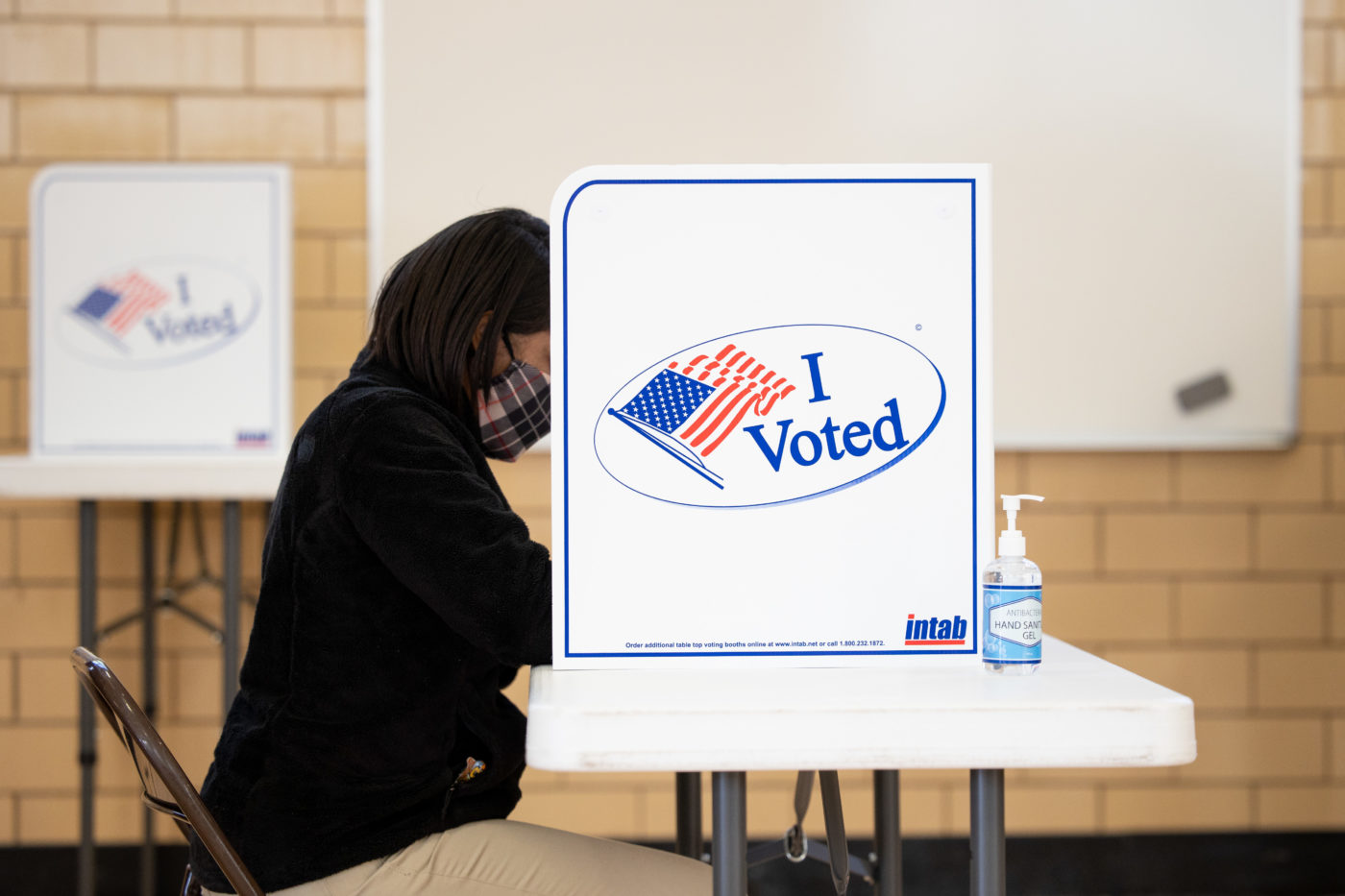 A Charlottesville resident votes on Election Day in the gym of Clark Elementary School.

Beyond selecting Congressional representatives — including reelecting a senator — and choosing a new president last week, there was a constitutional amendment that sailed through approval despite its journey to the ballot having uneasy tides.

The first of two state constitutional amendments, now having gained approval by the majority of Virginia voters, will outline the creation of a redistricting commission that will take the responsibility of congressional and state district map drawing out of the hands of just legislators.

According to Brian Cannon, executive director of FairMaps, the commission is expected to be composed by February of next year. He said that — pending the release of 2020 census data — the earliest new state and congressional maps could be drawn is May 2021, and potentially September of that year at the latest.

Once assembled, Virginia’s redistricting commission will:

While legislators will be making recommendations for citizen appointees, Cannon said citizens can apply to be considered in the coming months.

Previously, the task of creating congressional and General Assembly district maps has belonged to the General Assembly and is based on census data that is collected every decade. Democratic candidates and lobbyists have long challenged a previous Republican-controlled legislature over alleged gerrymandering of districts, which is the act of drawing districts to favor political parties or demographics.

“Legislators sit in a room, look at a map and say, ‘Well how are we gonna draw these lines so it makes those districts more favorable to us?’” said former Del. David Toscano, D-Charlottesville.

“They even know what the tendency of a precinct is to vote one party or the other,” Toscano explained. “So they use all that data to draw those lines presumably to have a map that’s fair, but we all know when they’re drawing the lines, they’re tending to protect themselves.”

With previous Republican control in the state legislature, redistricting reform has been a campaign platform for many Democratic lawmakers. Though the general push for redistricting reform aims to prevent legislative control over the drawing, the latest form of the proposed commission drew disapproval of some Democrats ahead of Election Day. 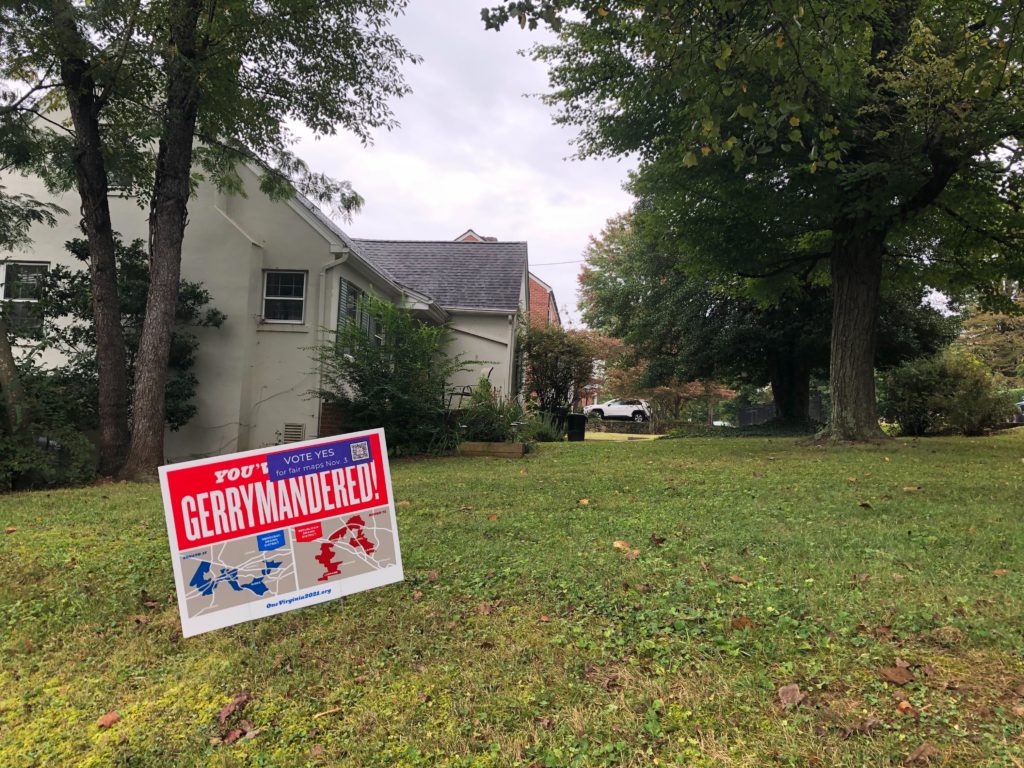 Critiques have ranged from the inclusion of legislators on the commission to stating the amendment doesn’t do enough to ensure an end to gerrymandering. Another critique has been that should the commission not reach consensus on maps, the Supreme Court of Virginia would step in — as is currently practice now

More progressive Democrats have been leery of the possibility of the maps going to the Supreme Court because the justices have largely been appointed by Republicans over the years.

Cannon critiques the current court for being “too deferential to the legislature” but said the members are “not party hacks.”

Meanwhile, the U.S. Supreme Court ruled last year that the most recent district maps, drawn in 2011, had been racially gerrymandered — packing Black voters into various districts.

While some see the current amendment as partial progress and a path to better redistricting reform, others fear it’s not enough. Ahead of the 2020 elections, a group of Democrat legislators and organizers launched an opposition campaign and political action committee, Fair Districts VA, urging voters to reject the referendum.

At the same time, longtime redistricting reform advocacy group OneVirginia2021 launched its FairMapsVirginia PAC. Its campaign was bolstered by over $2 million dollars of bipartisan donations, spawning “vote yes” yard signs across the state.  The amendment ultimately passed with more than 65% of Virginians voting “yes.”

Regardless of whether the proposed redistricting commission or the now Democrat-majority General Assembly were to draw the 2021 maps, legislation that passed this year provides outlines to avoid gerrymandering.

House Bill 1255 and Senate Bill 717 outline criteria to avoid political, racial and prison gerrymandering — the latter of which refers to the process of counting incarcerated individuals in census population data of jurisdictions where they may not live and legally don’t yet have their rights restored to vote.

Shapes yet to come

With new maps expected sometime next year, a clear sense on what those could look like is yet to be seen. With new law and a new commission in place, the maps could still resemble their current form.

University of Virginia demographer Hamilton Lombard explained that as Virginia’s population densities increased and decreased in various areas throughout the southern, northern and southwestern parts of the state, its districts continuously had to stretch upward or outward to chase population growth.

“If you look at the map over the last few decades, it’s slowly inched north going towards D.C.,” Lombard explained. “ I think the main reason you’re seeing that shift, is that if you think about Virginia in general, most of the growth has been happening in Northern Virginia. Then on the opposite side of the state in Southwest Virginia, you had the most decline. So, to keep the districts even, the 9th District, which is in Southwest Virginia, has constantly had to push eastward. That’s basically pushed other districts northward chasing where the growth is.”

Outgoing Rep. Denver Riggleman, R-5th, suspects the northern parts of the 5th Congressional District could be absorbed into a different one in the future. Previously, the 5th did not extend up to Fauquier County near the Maryland border. It has been reaching northward over the past three decades of map drawing.

Using the 5th district as an example, Toscano noted the challenge of wrangling the various urban and rural areas of the district while remaining contiguous and accounting for population density.

“There’s a lot of hope on one side that this commission is going to produce some glorious set of maps that look dramatically different,” he said during a Nov. 9, webinar hosted by the Virginia Public Access Project.

“The question is what role has partisan data and incumbent addresses played in the drawing of those maps,” he added.

In the meantime, redistricting reform advocates hope that the next set of maps are drawn in a nonpartisan manner resulting in more fairly created districts.

“What I’m anticipating — there’s been a lot of work that has gone into producing this — I think there may be a letdown in some ways when people start looking at the maps and it doesn’t look as dramatically different as the map has looked prior to this.”

Ultimately, Cannon says the commission will be more transparent than the map drawing process has previously been.

“There’s no perfect map,” Cannon said. “But if we can do it in a transparent process with community input, we are hoping to get much better decision making happening.”