Why are fewer women riding bikes in Charlottesville? 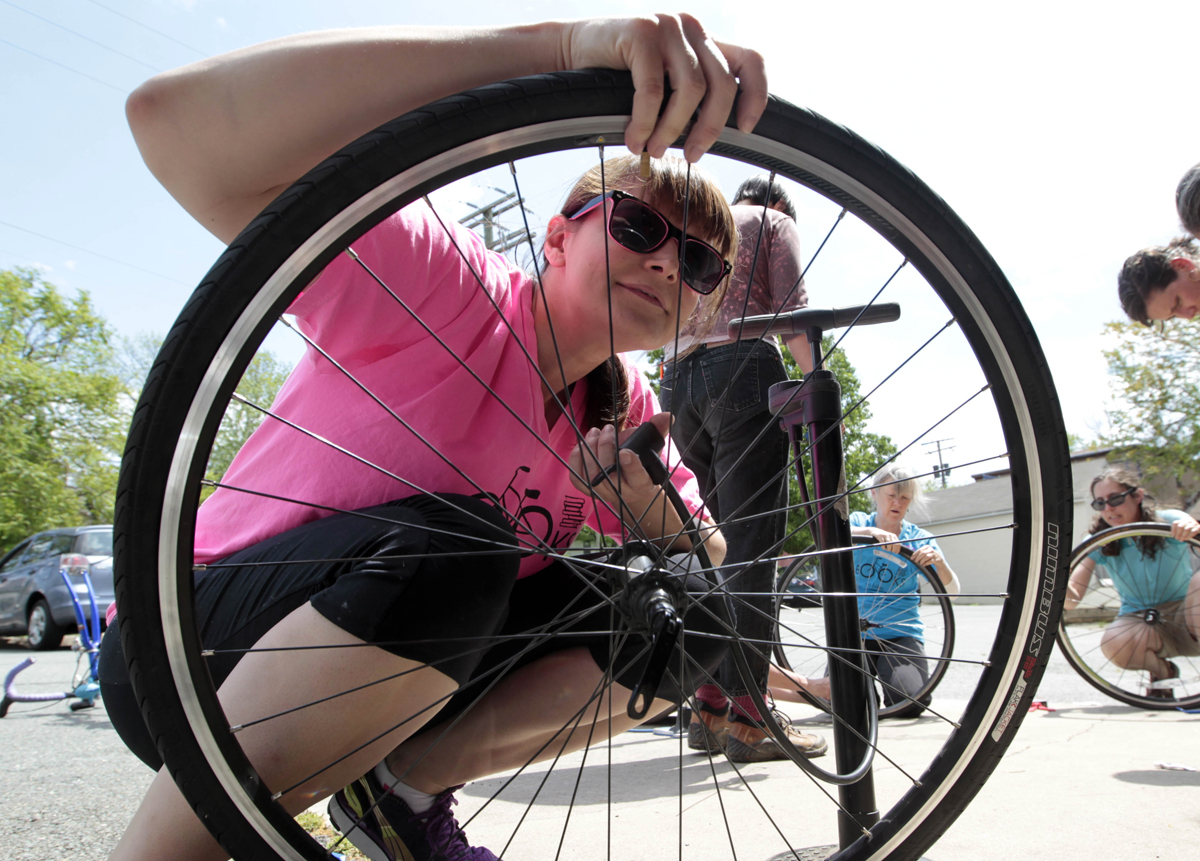 Women riders account for only 25 percent of bicycle trips taken in the United States, a statistic believed to be a reflection of lack of safe conditions, according to the book “City Cycling.”

Survey results taken by the city of Charlottesville in the past year reflect a similar gender gap.

When asked to describe their personal attitude as a cyclist in Charlottesville, 26 percent of women, compared with 62 percent of men, described their bicycling experience as “strong and fearless” or “enthused and confident,” according to the results of a survey published by the city last fall.

The numbers show that women are not as comfortable on the streets of Charlottesville as men are.

“Women seem to sense the reality of the risks when riding on [dangerous] roads,” said Scott Paisley, co-owner of Blue Wheel Bicycles and a member of the city’s PLACE Design task force. “There are more men who seem willing to take greater risks to ride in situations that are not entirely safe.”

Ralph Buehler, an urban planner and co-editor of “City Cycling,” presented similar conclusions concerning the correlation between women’s low ridership and the reality of unsafe cycling conditions during the Virginia Festival of the Book in late March.

In “City Cycling,” published in 2012, Buehler argues that safety of infrastructure is a key component to these differences. Countries such as Germany, the Netherlands and Denmark have a more even split between male and female ridership.

To tackle unsafe conditions and increase ridership, community groups and the city have undertaken a series of educational opportunities and infrastructure changes. 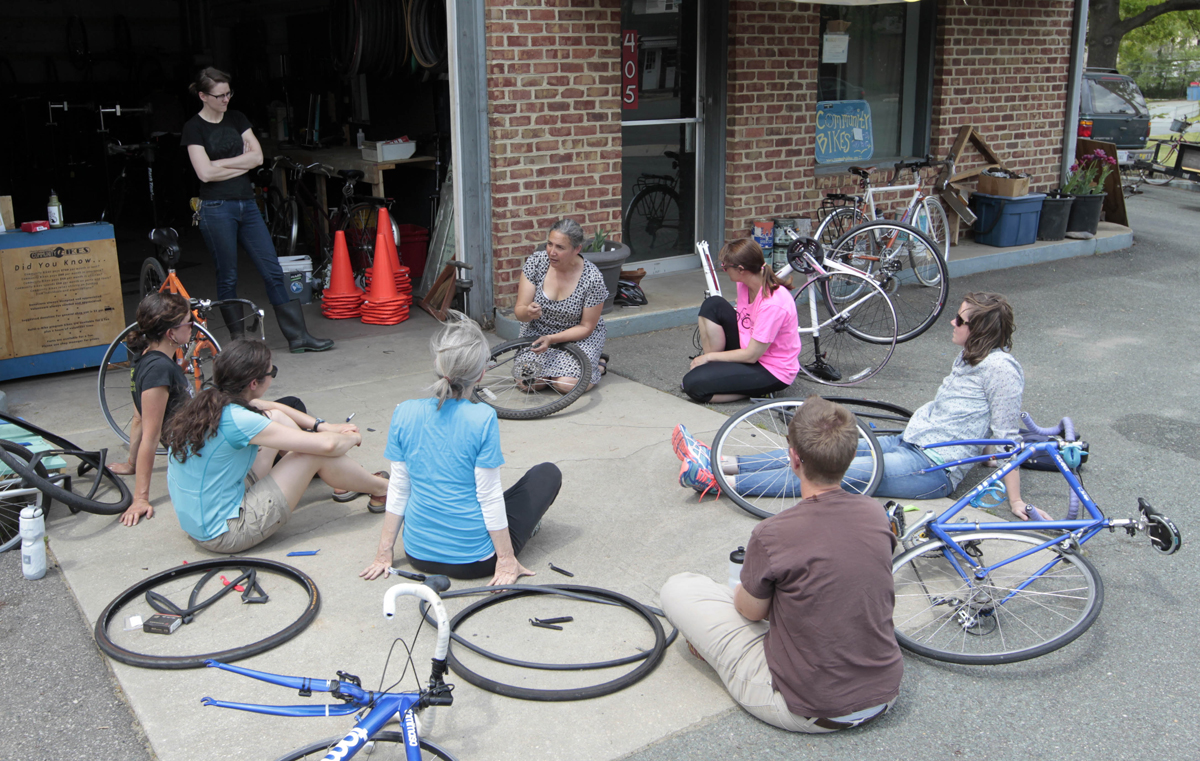 One group has provided educational opportunities through a seasonal series of bike workshops specifically for women at Community Bikes. The meetings give opportunities for women to learn about bike maintenance and mechanics.

“Some of [what we do at the workshops] is simple maintenance stuff,” said Shell Stern, co-organizer of the women’s bike workshops and a cycling educator. “Some women don’t feel comfortable in the male-dominated bike industry. There is just a whole different spirit of cooperation and camaraderie that we find important.”

“We’re trying to find ways to make people feel more comfortable and ask questions,” said Anne Dunckel, co-organizer of the workshops. “Women need to feel comfortable and invited in some instances to actually make a jump and be a part of a culture.”

The events provide an opportunity for women to learn cycling maneuvers and route options.

“We do drills on how to do emergency stops, turn, signal, safely navigate traffic signals and avoid creepy [people],” said Caroline Laco, another co-organizer of the workshops.

While much discussion is general information valuable to any cyclist, other conversation topics address specific questions and gear needs of women.

The workshops are among the efforts being made to improve ridership, safety and general Charlottesville cycling knowledge.

“We’ll be kicking off an interactive online map for people to identify the routes they currently ride, identify routes they would like to ride and destinations they’re going to,” said Amanda Poncy, the city’s bike and pedestrian coordinator. “This will be part of phase one of our public outreach and engagement.”

“People think about biking on the roads they typically drive on, and that is scary for people,” Poncy said. “We have a network of very low-volume and low-stress streets that we can tap into to make some of those connections.”

Additionally, the city is currently working on an update to the master plan, one that will better connect the on- and off-street transportation network and utilize new designs.

Alternative routes, cycling education and bike mechanics are only some of many more pieces to safer cycling infrastructure.

“When we’ve been named a bicycle-friendly community by the League of American Bicyclists, it has revolved around the engineering, infrastructure, enforcement and education,” Poncy said.

“I had a candid conversation with my bus driver,” Stern said. “He was fearful, saying that he sometimes just can’t see [bicyclists]. What training is involved for city employees?”

Maintenance of bike paths and roads is another important part of bicycle infrastructure.

“Trash in bike lanes is such a problem, especially on the Meadow Creek Parkway,” Laco said. “There has been a dead deer there for days. It has gravel, grit and car parts. I stopped riding on it because I don’t want to get a flat.”

While there are improvements to be made, many agree Charlottesville is a prime place to ride.

“We live in a city that is only 11 square miles,” Poncy said. “It is the hills and some challenging intersections that may be discouraging people from [cycling].”

Poncy, who lives just a half-mile away from her downtown office, bikes her children to school and bikes to work.

“I ride with my kids to school,” Poncy said. “I take them in a trailer. It is fun and they have a great time. It is also really good exercise for me.”

Stern found that riding her son to school gave him an opportunity to release some energy before beginning his school day.

“My commute is about nine miles roundtrip,” said Laco. “I do that four or five times a week. I may do another 10 or 20 miles on the weekend. The first time it was horrible. Now it is the favorite part of my day.”

Laco managed to drive her car only 1,000 miles last year. Her goal this year is to drive fewer than 500 miles.

Cycling advocates said they are optimistic changes can be made to road use to ensure the safety of the many different road users.

“We are quite good at adapting,” Paisley said. “It just takes a little time to get used to the changes.”