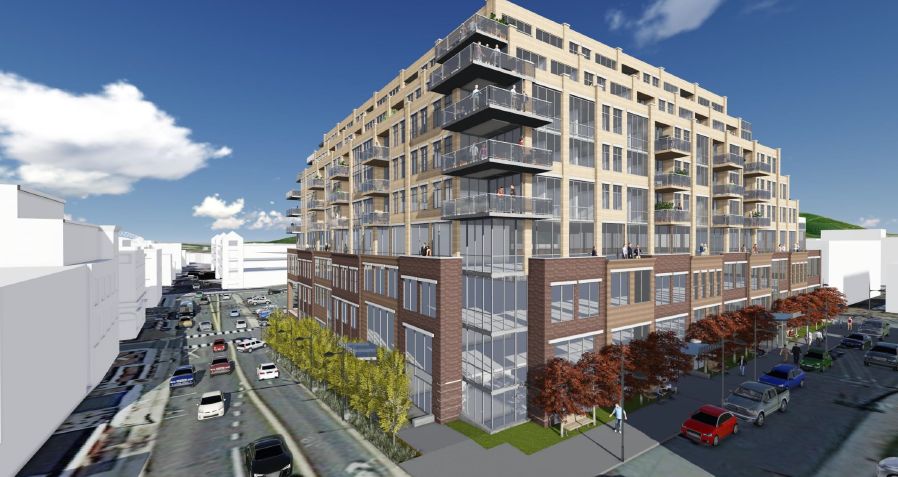 After 20 years and multiple studies, Charlottesville’s City Council has finally selected a permanent home for the City Market.

“You see that it is possible to come to decisions,” said Mayor Satyendra Huja.

The vote was met with applause Monday night after the council selected the Market Plaza proposal. Local builder Keith Woodard intends to purchase and redevelop a city-owned parking lot into a nine-story building that will have homes, offices and stores.

In January, the city issued a request for proposals from firms to develop the city-owned lot between Water and South streets that has been home to the City Market since 1993.

A total of four submissions were received.

“I have made up my mind that mixed-use development and the market can happen on this site in spite of the number of consultants we hired that said no,” Huja said.

Their proposal envisions an L-shaped building with retail frontage on Water Street and Second Street Southwest. The City Market would be held in a half-acre public plaza with enough space for 115 vendor stalls. The building would feature 18,000 square feet of retail space, 58,000 square feet of commercial space and 67 apartment units.

The Market Plaza proposal takes advantage of the entire city block because Woodard has been able to secure an agreement with Charlottesville Psychological Associates, the current owner of a private parking lot in the block’s southeast corner. This allows space for the plaza, which would be an urban park when the market is not in session.

“It’s the only one [of the proposals] that really has outdoors still in it,” Councilor Dede Smith said. “That was high on my list.”

Smith said she understood that Market Plaza was not supported by many vendors who spoke at a public hearing earlier this month.

“We have to weigh so many other factors, including the economics of it and the potential for what [the space] is when it isn’t the market,” Smith said.

However, Smith said she is concerned the Market Plaza concept does not have enough entrances for vendors to access the site and she wants that to be considered as the city enters into negotiations on the project.

At the public hearing, one vendor had complained that she did not like how the Market Plaza would be blocked from the Downtown Mall because of the tall building on Water Street. She said she would want to see the building oriented to face the mall.

But Councilor Bob Fenwick said he supported the way Market Plaza was oriented because it would help facilitate the move to a year-round market.

“If it’s going to be used in late fall and the winter and the early spring, we have cold winds coming from the northwest and you want to be protected,” Fenwick said. “You want the sun to come right down into that plaza.”

Before the council made its decision, the nonprofit Market Central group sent a letter endorsing both the Market Plaza proposal and one from Richmond-based WVS because both fit in with their vision of how the market should be developed as part of its own city district that spans multiple blocks.

“For more than a decade, Market Central and many others have advocated that the optimal permanent home for the City Market is a public plaza, designed from the start to house the City Market, within a mixed-use development of the two full city blocks between Water Street and South Street, on either side of South First Street,” reads a letter from the group.

In the letter, the group also claimed that ownership of the adjacent lot “will soon change hands.” The lot next to the Water Street Parking Garage, which is owned by the Charlottesville Parking Center, is assessed at $2.58 million.

Asked to comment on a potential sale, Bob Stroh, CPC’s general manager, would neither confirm nor deny Market Central’s claim.

According to the State Corporation Commission, a limited liability corporation called CPC Acquisition formed on March 10. Its registered agent, Larry McElwain, did not respond to a request for comment.

The proposal from WVS features two C-shaped buildings that would surround an iconic market building. Unlike the other three proposals, WVS envisioned using both blocks but their proposal contained no guarantee they had secured the property.

Smith said she thought the city could not risk developing that large a structure at this time. She also questioned whether the community could support an expanded market.

“A covered market is attractive but I came away that we are really not ready for a seven-day market,” Smith said.

Councilor Kristin Szakos said she liked that the Woodard proposal allows room for expansion onto the adjacent lot when the time comes.

“I’m not sure our local economy is ready for a two-block project right now,” Szakos said. “I think to put in two new blocks of development is a bit much but to have the possibility that the design that came in for this project could be reflected on the other side.”

City attorney Craig Brown said the council will need to approve the sale if negotiations with Woodard are successful. That would happen after a public hearing.

“We are currently in the process of determining our next steps,” Woodard said in an interview. “We’re pleased that City Council had the foresight to recognize the potential of this site.”

The project will need a certificate of appropriateness from the Board of Architectural Review and a special-use permit for the additional height and density.

Woodard said he hopes the project can be under construction by the end of 2015.

Woodard has not disclosed the sale price he is willing to pay the city. The three other firms had offered between $2 million and $4.15 million.