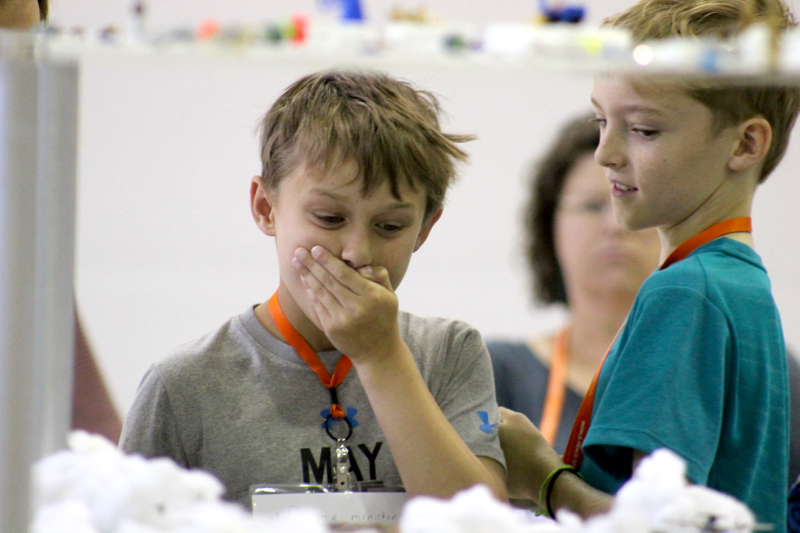 Tables and chairs made up a circle in the Murray High School gym. Thirty-two children sat, staring at each other, toes tapping, knees fidgeting.

“Negotiations may begin now,” a voice said, as a bell began to ring.

The children leaped out of their seats, running zig zags through the circle.

“If you sign the peace treaty, I’ll take my troops out of your territory.”

“I’ll give you $4 million for the carbon dioxide scrubber.”

“Legal counsel says we have to get it in writing.”

The World Peace Game camp wrapped up Friday after a week of intensive game play. The campers, ages nine through 12, spent their mornings solving a series of crises orchestrated by camp leader and World Peace Game creator John Hunter.

From negotiating treaties to recovering from natural disasters, the campers kept busy while a group of teachers from all over the country observed, hoping to bring the game back to their classrooms.

The game, normally carried out over the course of a semester, was condensed into a single week, creating an abridged, yet still engaging experience.

“We want the environment to be intense, overwhelming, confusing and chaotic,” Hunter said. “This is contrary to what teacher training instructs you to do.”

“The emotional quantity is so much higher that there are often tears, frustrations,” Hunter continued. “It’s designed for — it’s expected it will happen. And a teacher has to be wise enough, strong enough, and experienced enough to know that it’s going to happen and to have a good enough relationship to be able to take them through.”

The game is based around a four-tiered Plexiglas tower that is occupied by four countries, each with a prime minister, secretary of state, minister of defense, and chief financial officer.

Those not assigned to a country team are made officials of either the U.N., the World Bank, the international arms dealers, or are given the position of Weather Goddess.

Each student has a job in the game, whether that is calculating a country’s budget, selling weapons during times of war, or choosing which natural disaster is going to happen next.

The goal of the game is to achieve world peace, an objective that can only be met when a series of crises are solved. The children must work together to solve the crises, a lesson that took Irene Newman, who first played the World Peace Game in 2000 and 2001, a little while to figure out.

“In my mind, the way to win the World Peace Game was to be the person who was in control of everything,” Newman said. “The way to win is actually for all of us to work together and to make decisions… We have to realize what we can control and what we can’t control and how you can do that together.”

“Everything doesn’t go right the first time,” Worrall said. “You can’t really get everything done at once and sometimes even when it’s your thing, you need to give it to somebody else because you aren’t able to do it and they are.”

The lessons and values instilled in the children during the game are ones that Newman, who studied national and international security in college, says have stayed with her. In addition to the importance of collaboration and compromise, she said she feels that admitting when you don’t know something is key.

“I think that the smartest people I have met in my life are the people who know what they don’t know and are willing to talk about that and admit it,” Newman said. “[Hunter] was very open about saying, ‘It’s OK not to know. It’s OK to be desperate. It’s OK to try something that feels wild because that’s what is happening in real life.’ It creates this space for everyone else to have the confidence to say that which makes us all better and smarter people.”

The World Peace Game is played in more than 27 countries and in more than 40 cities. According to Hunter, the request for teacher training for the game has increased since the November presidential election from a couple a month to 10 to 12 requests a month.

Teachers who are looking for options beyond a traditional classroom experience, like Jackie Lewis from San Diego, have driven the increase.

“We can’t keep doing the same things that we do in our classrooms,” Lewis said. “This is so complex and took him so many years to master, but the reward is so great… [Children] are these critical thinkers and they are these problem solvers, but I don’t think that we always ask of them that way.”

Gavin Sudwall, World Peace Game Advisory Board member and Senior Public Affairs Officer at the U.S. State Department said he also feels that the game offers a learning experience unlike any other.

“I used to think that you could not teach what I did,” Sundwall said. “The only way to learn was by doing until I met [Hunter] and the World Peace Game and he had us all figured out.”

The game itself can be played in many different ways, depending on where the children choose to take it. With some games about economics, social issues or warfare, there is no way to predict if world peace will be achieved.

However, there has not been a game yet where the children have not won, though sometimes the result comes down to the wire.

“As a teacher, you cede control of your classroom to the students, if you’re a wise teacher I think,” Hunter said. “Therefore they take my game and it breaks my heart sometimes, but they do things I would never do and wouldn’t want to do because I want the integrity of what I created to remain the same. But I have to do that. I have to give up my individual agenda for the greater good.”