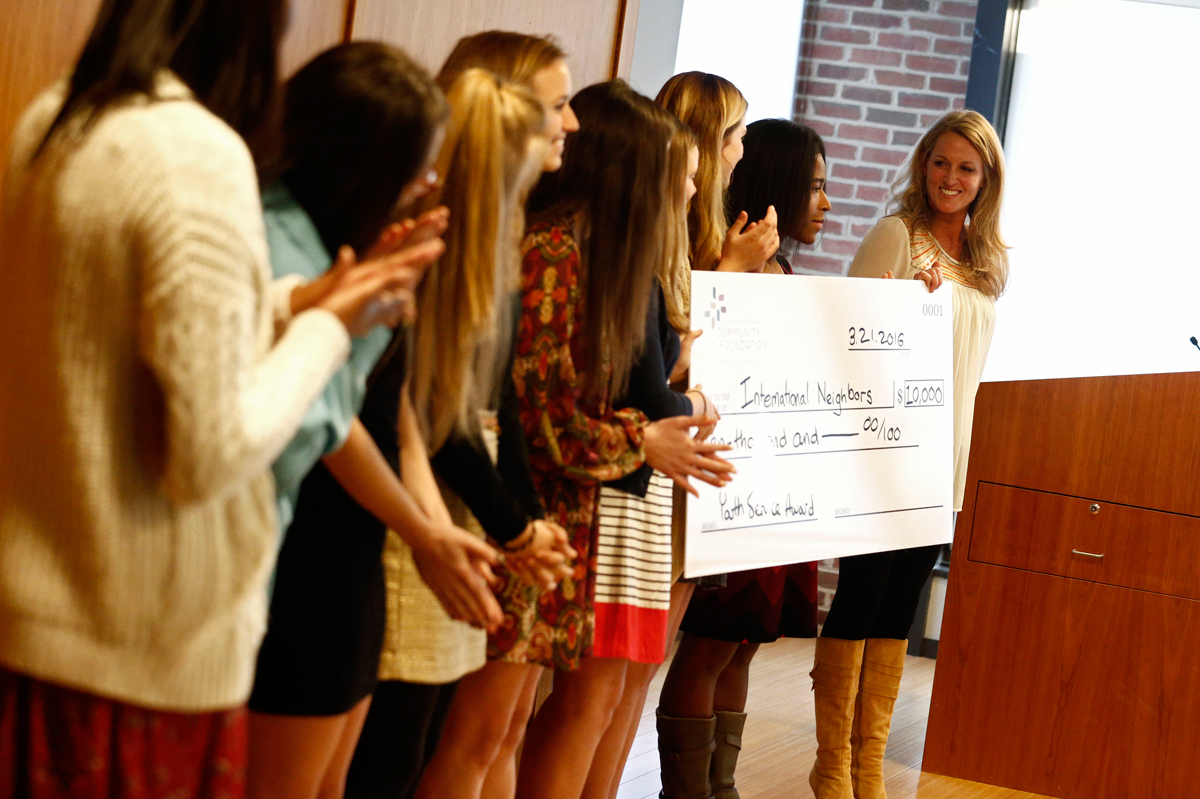 Monday marked the 22nd time the CACF has given out the Youth Service Award grant.

International Neighbors, a refugee assistance organization founded in November by Kari Miller, an English as a second language teacher at Jackson-Via Elementary, will spend the money on a large van or small bus to help transport recently arrived families.

Up to now, volunteers with International Neighbors have given the families rides in their personal vehicles, organizing pickups and dropoffs via cellphone, Miller said.

“We have been doing a lot of cooperation between volunteers,” she said. “We have 15 [refugee] students signed up for soccer on six different teams, so just trying to figure out where their games were, where practices were, it just took a lot of making plans … and it wasn’t always successful.”

The bus will take the burden off volunteers’ personal vehicles and make transporting large groups much simpler.

“A lot of the families are very large, so taking one family and a half really has been all that has been feasible,” Miller said. “It will be nice to cut down on gas and help the environment.”

The Youth Service Award Committee, made up of students from the area’s public and private high schools, selected International Neighbors for the grant from a pool of about 20 applicants.

The decision came down to the dedication of the nonprofit’s all-volunteer staff.

“As I observed Ms. Kari interact with immigrant families, I was humbled by her compassion for and devotion to the community,” said committee member Haley Chan, a senior at the Covenant School.

Rosa Atkins, superintendent of Charlottesville City Schools, said she was touched that a teacher from her division took up the immigrant families’ cause after seeing students struggle in class.

“As she was talking, I had tears in my eyes, just to know we have teachers who love so deeply, who care so very much about the children they serve and the families that come along with those students,” Atkins said. “It’s not just a student in their classroom — it’s family, it’s a neighbor, it’s someone who is special to them.”

As part of the decision-making process, some of the student committee members and Miller visited a neighborhood with a significant refugee population.

The experience was an eye-opener for Western Albemarle High School senior Deborah Ayres-Brown.

“There were just all of these little refugee children following [Miller] because they were so happy to see her,” Ayres-Brown said. “One of the families actually invited us into their home, she was so comforting.”

Students are selected to participate on the Youth Service Award Committee by their principals or guidance counselors.

“When I was growing up, my idea of community service was just, ‘Don’t shoot out street lights,’” Gieck said. “Looking at these resumes is really something. What you have accomplished as a group of volunteers demonstrates your leadership.”

Atkins addressed the students before the grant-awarding ceremony.

“We did not pay you for your work, not because the work was worthless, but because the work you did was priceless,” she said. “It warms my heart that in Charlottesville we have young people who put others before themselves.”

The foundation also gave awards to the students on the committee for their service, leadership and academic success.