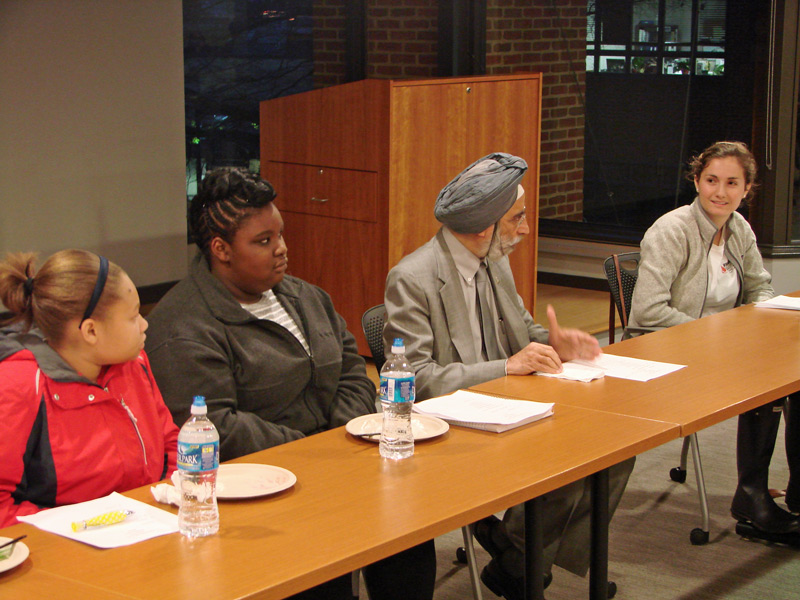 In its first year, the group hosted a basketball tournament to raise awareness of the newly renovated Jefferson School City Center. In its second year, it focused on transportation, public safety and the recent report completed by the Blue Ribbon Commission on Sustainable School Funding.

To close funding shortfalls, the Youth Council supports a 1 percent increase to Charlottesville’s meals tax. An option introduced by the Blue Ridge Commission last year, the move would fetch about $2 million per year.

“That’s an area of interest to them,” said Gretchen Ellis, a human services planner with the city. “They really want to see full funding for the schools.”

City Councilor Kathy Galvin asked what the students feel the schools need that they aren’t getting.

The students’ response was clear: technology.

“It’s a battle for resources at this point, because if you don’t have a lot of resources, it’s hard to be on that honors track,” Bryant said.

“I agree that we need more revenue, and the meals tax is certainly on my table,” City Councilor Kristin Szakos said.

The students would also like to see an end to pesticide use at schools and parks, and want more support services for minority and low-income students in an attempt to bolster the presence of these student populations in Advanced Placement courses.

“Almost all of these kids are in advanced and honors classes, and they are the first ones to say to us … that it’s almost all-white,” Gretchen Ellis said. “I think they’re going to ask for a work session with the School Board as well, because they really want to look at what can be done to give kids the skill sets to be able to take those advanced classes.”

“I think they see some innate unfairness,” she added.

“It seems like students who are from lower socioeconomic areas are put in the lower-level classes,” said Ellen Yates, a Charlottesville High School sophomore, adding that preschool access helps close the achievement gap that keeps students from later entering advanced classes.

Regarding personal safety, the Youth Council is circulating a petition requesting that the city install emergency blue light phones on the Downtown Mall.

“I think they have an understanding that the value of the [phones] might be more symbolic than practical, but the research they’ve done has shown that when there are blue light phones crime is less likely to happen,” Gretchen Ellis said.

But Szakos said that while the community needs to feel safer, she questioned how the initiative would be paid for, and weighed the project against other areas of government.

“I’m not sure I’m completely convinced that this is the best use of our money,” Szakos said.

Galvin said that if an area is experiencing elevated levels of crime, a blue light phone might not be sufficient.

The group also backs forming a responsibility campaign, similar to the University of Virginia’s “Hoos Got Your Back,” initiative, which encourages people to help prevent sexual assault.

Additionally, the youth organization wants to create opportunities for citizens to connect across racial lines, argued that issues of race are often avoided in public discourse locally and wants City Council to be mindful of small business in the West Main corridor as the street is redeveloped.

David Ellis said he enjoys that the students present another point of view.

“When we’re talking about public safety, we’ll look at it from an adult perspective, but they’re looking at it from a teenager’s perspective, so they’re able to bring some things to the table that we may not have thought of that could really help us make better decisions,” he said.

Moving forward, Gretchen Ellis said, the students would like to be asked to gather more input from their peers.

“They’re very interested in convening a series of forums so they can elicit feedback from other kids,” she said, noting that many of the students have been trained in facilitating focus groups. “So they’d like to do more around topics that City Council would like to hear more about.”