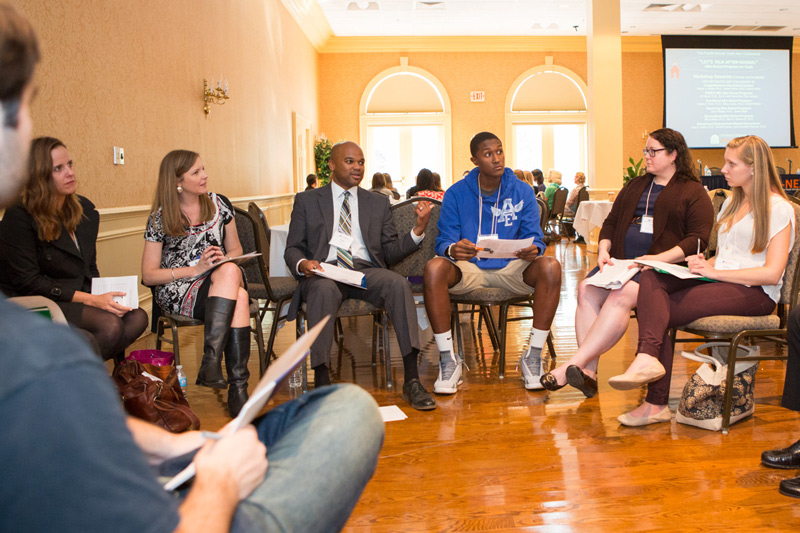 Most school conversations focus on meeting the needs of students during traditional school hours, but equally important are the activities offered to students after the final bell sounds.

How after-school programs can foster healthy development in children, and what a good program looks like, were the focus of the fourth annual conference hosted by Youth-Nex, a University of Virginia center promoting effective youth development.

“The hours of 3:00 p.m. to 6:00 p.m., from a risk perspective, is the time that students are most likely to engage in risky behavior,” said Nancy Deutsch, a professor at the Curry School of Education. “I like to flip that around and think of it as an opportunity to engage kids.”

The conference drew youth development professors and practitioners from around the nation to discuss how after-school programming can be improved, as well as to share ideas and best practices.

Presenting on the characteristics of a high-quality after-school mentoring program, Jean Rhodes, a professor of psychology at the University of Massachusetts Boston, said consistency is king.

“If the relationship falls apart prematurely you get negative effects,” Rhodes said, noting that about half of relationships end too soon.

“When you have an enduring relationship, when it lasts about a year, you get much stronger effects,” Rhodes added.

“I get to participate in something
that’s mine, and something that I
enjoy,” Montes said. “I’m not
forced to do it.”

Despite the knowledge that mentoring can help children, Jackie Bright, executive director of Big Brothers Big Sisters of the Central Blue Ridge, said recruiting volunteers is a challenge.

“It’s probably the number one issue that not only our agency faces, but every agency faces,” Bright said, adding that many interested parties shy away when they’re told that the child will see the best results after about 18 months. “It’s a big pill for a lot of people to swallow.”

One way to help young people deal with this, Rhodes said, is youth-initiated mentoring, in which the child asks a person in their life to be their mentor.

“We’re starting to teach the kids how to recruit caring adults who are in their lives,” Rhodes said. “It’s hard to say no to someone who asks you to be their mentor.”

Stanley Pollack, executive director of the Center for Teen Empowerment in Roxbury, Massachusetts, spoke about the key ingredients every after-school program should have. Paramount, Pollack said, was engaging students through their positive interests.

Daniela Montes, a junior at the Preuss School—a charter school at the University of California San Diego—said she joined the group Whatever it Takes for just that reason.

Montes and her classmate, Jovanna Sanchez, both joined Whatever it Takes, a teen entrepreneurship program that requires students to develop business plans to launch social impact projects.

Sanchez said she joined because she felt valued.

“I thought it was really cool to have a space where your opinion counts, where you can create things that you’re passionate about without other people turning their back on you,” Sanchez said.

And that sense of belonging is essential to making a program work, according to Nickki Pearce Dawes, a professor of psychology at the University of Massachusetts Boston.

Strong programs, Dawes said, are welcoming and have peers interacting with each other.

“The magic of engagement happens in part because of the friendships that are formed,” Dawes said. “There’s a climate in good programs that helps smooth out the rough patches.”

Both Montes and Sanchez are working on projects that they hope will create bonds between people.

Last year Montes developed a peer mediation program at her school, and this year she has turned her focus to Project 16.

Originally developed by Preuss alumni, Montes is reinvigorating the effort that improves communication between teens and adults by asking adults what advice they would give their 16-year-old self.

Montes films the interviews and then posts them to the initiative’s YouTube channel.

Sanchez’s project, Major Decision, connects first-generation college students to students who will be the first in their families to go to college.

Locally, both Charlottesville and Albemarle offer a variety of after-school programs.

“An irreplaceable responsibility we have for all students is to prepare them for lifelong success in school, in the workforce and as citizens,” Albemarle schools spokesman Phil Giaramita said. “We achieve that with a support system that includes academic counseling and support, partnerships with community organizations and mentoring programs that go beyond classroom studies.”

“A powerful example is the work that our Monticello High School students do in mentoring middle school students,” Giaramita added.

Both programs offer academic and recreation opportunities for students.

Charlottesville School Board member Jennifer McKeever praised the programs, but said the Youth-Nex conference provided such good information, that she wonders what more the division can do.

“We have a lot of teachers who want to do work with kids after-school,” McKeever said. “I just want to make sure that we’re meeting the needs of the kids.”