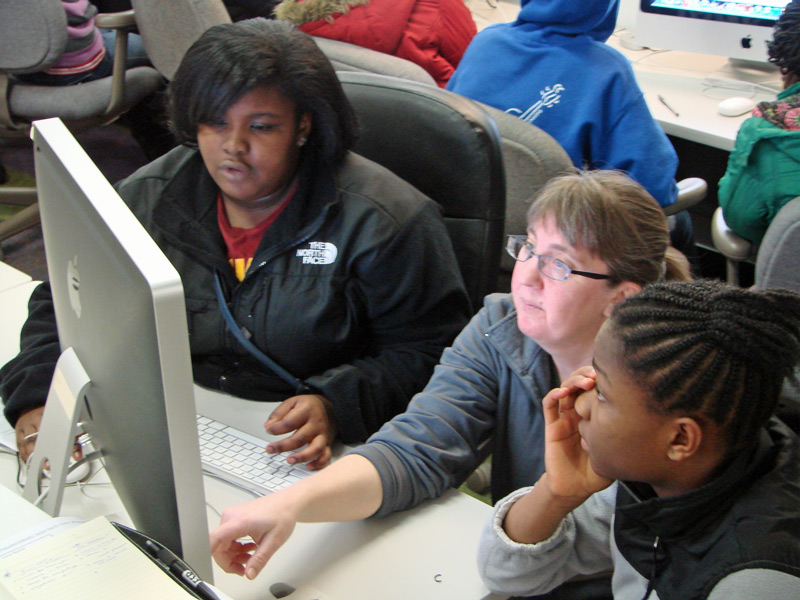 (L-R) Zyahna Bryant, Kim Wilkens, and Weedor Kollie building an app during a meeting of Tech Girls at Computers4Kids

Prior to Tech Girls, Wilkens worked in the technology industry, then transitioned into teaching. In 2010, she attended a conference where she learned that the number of women graduating from college with tech-related degrees was on the decline.

“That really caused me to have concern, so I came up with this idea of Tech Girls to raise awareness about the issue, but also to provide resources and workshops and ways to work with girls that will engage their interests and keep them interested,” Wilkens said.

Among young children, Wilkens said, there are similar numbers of interested males and females, but that trend doesn’t last.

“By middle school that starts dropping off, and it really drops off in high school,” Wilkens said. “And by college only 18 percent of the graduates are women.”

Wilkens chalks the lack of women in STEM fields up to cultural issues.

For example, Wilkens said, the stereotype of a computer scientist working alone in his basement isn’t very appealing to girls.

“We’ve gotten ourselves into this spiral where we have less girls interested in it, so there’s less girls doing it because they don’t see the role models,” Wilkens said.

Christopher Hulleman, Professor at the University of Virginia’s Curry School of Education, agreed.

“STEM disciplines can be so masculine, and there’s also this presence of strong gender stereotypes, so females enter this masculine area, and not only do they have to act differently to fit in,” Hulleman said, “but then there’s a stereotype of what they’re going to be like as females, so it’s a double-whammy that they can experience.”

“A lot of men are mostly into technology, and a lot of women are into fashion and shopping, so it helps to show that women can do the tech stuff too,” Kollie said.

In addition to the gender imbalance within the field, Wilkens said, it’s tough to watch females not pursue a field they initially showed interest in.

In Generation STEM: What girls say about Science, Technology, Engineering, and Math, the Girl Scouts of America found that 74 percent of girls ages 14-17 were interested in STEM.

“But they felt that other girls their age weren’t interested, they didn’t want to be the only girl in the class, and they felt that they would have to work harder than their male counterparts,” Wilkens said of the study.

Hulleman said that feeling a sense of belonging in a discipline is one of the components that impacts student interest, which ultimately can determine what a student decides to pursue.

“Women aren’t well-represented in this field, so having a girls group is promoting girls to try new things,” Bryant said.

“And I’d like to see us be in more locations, and attract more girls and more mentors,” Wilkens said.