Bulldozers move in on Garrett; residents move out

The structure is divided vertically into two units, each of which has living room, kitchen and full bath on the first floor and one bedroom on the second floor. Rent is $15.00 per week unfurnished for each unit. 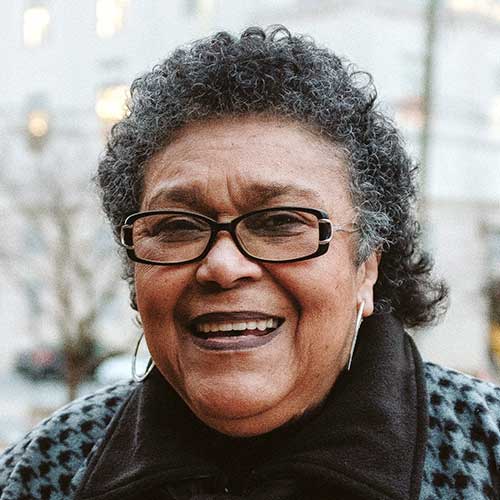 What do you remember about Miss Marguiretta’s house?

The Reimagining of Friendship Court

INTRO
By Jordy Yager The redevelopment of Friendship Court is slated to be the largest new construction of low-income housing undertaken in Charlottesville in more than two decades. The plan alone is groundbreaking, having been directly created by current Section 8 residents in partnership with Piedmont Housing Alliance. City staff calls it the most nuanced and complex plan they’ve ever encountered. It ambitiously attempts to balance promises of zero resident displacement with the city’s broader affordable housing needs, while also calling for hundreds of new, likely higher-income, residents to move in, as residents hope to de-stigmatize the lasting effects of poverty born out of generations of racist government policy and neglect. This year will be the make-or-break year for Friendship Court’s redevelopment efforts. Millions of dollars in city, federal, and private funding stand between the massive plan and the highly anticipated 2020 groundbreaking. And while the green lights have begun to align and most residents are excited, the plan has its critics — those who call for greater levels of resident autonomy, greater security measures to guard against social and cultural displacement, and greater reparations for past wrongs. In crafting this project, we’ve tried to tackle all of this and more by separating the longer narratives into five major questions: Part 1: What is the plan? Part 2: How did we get here? Part 3: Does mixed-income housing work? Part 4: Who does Friendship Court belong to? Part 5: What’s next? But we also wanted to give you access to as much of our reporting as possible, so we’ve created a timeline that details the history of this area, dating back 150 years, through the use of more than 130 maps, documents, archived articles, and photographs. Similarly, we wanted you to actually hear each of the two dozen long-form interviews we conducted, and not merely the portions we’ve included in the individual stories. So we’ve included more than 300 audio clips throughout the story: in the articles, the timeline, and on each person’s profile page. Our hope is that with all this, more of the picture will begin to emerge, and that, as we stand ready to make powerful and significant changes in the city, we all can help craft the solutions.
1860

I hereby give unto my son John B. Garrett and to his heirs forever, my negro man Montgomery.

— Alexander Garrett’s last will and testament

That said lot shall not be sold, or leased to or occupied by a person of the negro race, but this shall not be construed to prohibit the keeping of negro servants on said property.

— Racial covenant from a property deed in Charlottesville

A lot of people say they come in here just because it smells so good.

— Kenneth Allen to the Daily Progress

The poorer areas of Charlottesville produced the greatest resistance to the housing authority.

A survey of presently available housing shows clearly that sufficient low-rent housing is not available now, and none is being constructed by private builders.

Just behind the warehouses and two blocks south of Main Street in downtown Charlottesville lies a 40-acre tract known as the Garrett Street section. It is home to 170 families, most of them Negroes.

You are employers, you are key people in the planning of our cities today. You share the responsibility for the mess we are in terms of the white noose around the central city. It didn’t just happen. We didn’t just suddenly get this situation. It was carefully planned.

Re-examining the role of architects and planners

The structure is divided vertically into two units, each of which has living room, kitchen and full bath on the first floor and one bedroom on the second floor. Rent is $15.00 per week unfurnished for each unit.

Bulldozers move in on Garrett; residents move out

The Charlottesville Redevelopment and Housing Authority has determined, in the exercise of discretion legislatively delegated to it, that, in order to carry out the objectives of its redevelopment project, to prevent recurrence of blight, and set a prevailing standard in esthetics., public policy is best served by the...improvement of vacant land which is intended for redevelopment by private enterprise.

Elsie Church, resident manager who moved to Garrett Square from Edenton, N.C., hopes to see classes in nutrition, single parent parenting, and energy conservation held in the community building when it is completed.

The area was a slum area within our city that needed to be treated.

It’s a place they can go and we can’t do anything to them.

Police have been arresting drug suspects at a record clip since 1989, and nine out of every 10 cocaine suspects who have been convicted of felonies have been black. However, national surveys, including a 1988-90 Public Health Service report, show that more whites than blacks use cocaine.

I think this is great, that they show they’ll help take care of us.

Explain to the residents here: How is this fence safe? Who is it protecting?

The fence goes up

I feel confident that 15 years from now, people won’t recognize the south side. The blocks will be filled in, it will be mixed-use. I ultimately think it’s going to become the SoHo of Charlottesville.

It’s discriminatory. Nowhere else in Charlottesville do you have that sign. What it really does [is cause people who are already powerless to feel] inferior and helpless.

That fence makes the community think we’re a bunch of criminals down here. These are good people, hard-working people.

We want more attention paid to our property than the normal police service would allow.

It’s getting pretty pricey all around us. So obviously this is a very valuable piece of property.

Residents have a low capacity to improve their socio-economic status and this adversely affects morale.

You look right at us. You look right through us. And you never know our names because you don’t care enough to ask… Our neighborhoods have been gentrified and a thousand of our population have been displaced. We have a black city manager, a Dialogue on Race and a very nice apology for Vinegar Hill. But black people continue to be economically, academically and electorally disenfranchised.

I encourage you to be skeptical, because you are going to hear a lot of promises, but where are the assurances that those promises are going to be kept?

— Bob Fenwick, the only city councilor who voted against the SIA

This does not feel like a resident-involved process, which is what we were promised.

We do not want to be an exclusively low-income development. We want a mixed-income community…We see the work we are doing as being a part of the solution, and hope our plan and approach offers one example for future affordable housing plans in the city. We want to lead our future, not follow an old outdated model of segregated low-income housing developments.

A final master plan is completed

How Did We Get Here?
The city’s racist housing history has long-lasting and inescapable effects
Read More

Who Does Friendship Court Belong To?
Balancing cultural identity with a shifting landscape of neighbors
Read More